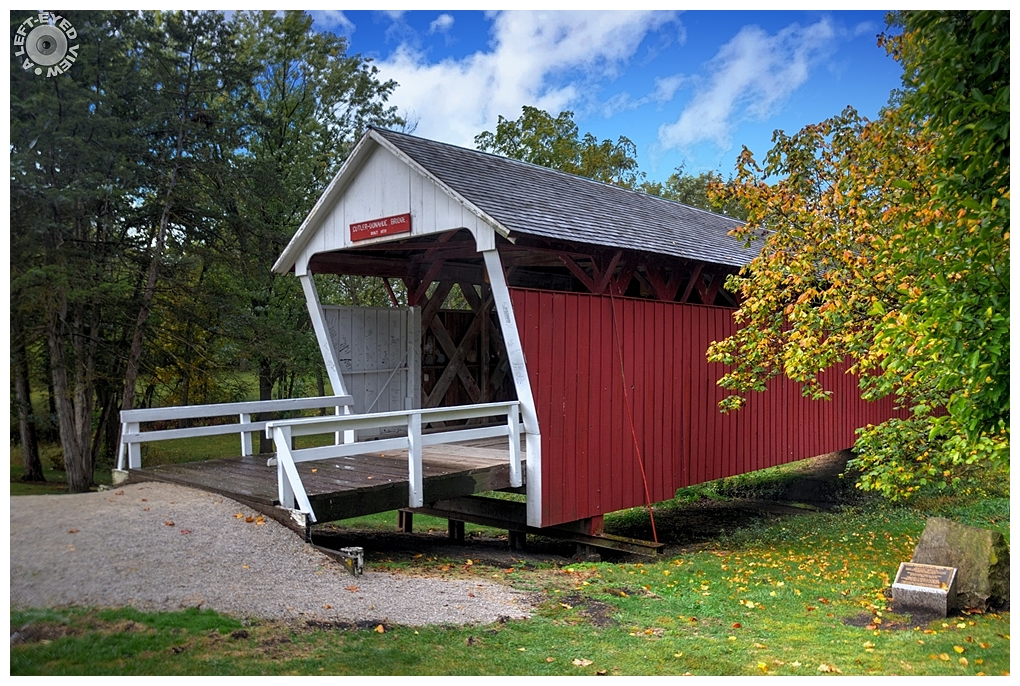 Posted by Steven (Chicagoland, United States) on 26 October 2021 in Transportation and Portfolio.

The Cutler-Donahoe Covered Bridge was designed and built by Eli Cox in 1870. It's 79 feet long and approximately 40 tons in weight. It's a covered timber superstructure with lattice truss design with overlay queenpost frame, fastened with round wooden pins and iron bolts.

This bridge was originally located about 18 mile northeast of Winterset, Iowa near Bevington over the North River. It was moved to its current location in Winterset City Park in 1970. Clair Rogers, a house mover from Macksburg, Iowa, commissioned to move the bridge before the first covered bridge festival. Clair gave his time to rebuild the west one-third of the bridge and re-roof it.

Covered bridges are often named for nearby residents. The Cutler and Donahoe families each claimed "naming rights", thus the bridge's hyphenated name.

when i saw your picture i immediately thought off all the movies with those bridges
it's only in america that you have such lovely bridges !
excellent capture
great to be back :)

I really like to see these covered bridges. We have none like these back home in Ireland. 5*

Beautiful old bridge.
But, can you explain why these covered bridges are often red painted ?

Lovely architectural capture and interesting back story too

Nice to have you back. What a beautiful red covered bridge. i llke this point of view.

Beautiful composition and colors . Superb framing of this special bridge !

So glad to see this post...I always love covered bridges!

Beautiful covered bridge. Good to see you back.

That is a gorgeous bridge.

it is wonderful to see a historic structure like this preserved and made accessible, but it is sad to see it without water beneath it.

A whole history is linked to this covered bridge.
Thank you for all the information attached.

Interesting bridge and interesting information. Thanks for sharing. It looks great with lovely autumns scenery around it.

I have never seen a covered bridge before, Steven. It's good that you are posting again

Beautiful image of this covered bridge and interesting information. Great. :)

This bridge is more like a house than a bridge.
We only know open bridges.
Nice to see with these colors.

How fun these will be to see, thanks to you. When I was reading the stats on this particular one, I was thinking of the book/movie. Lo and behold your promise of showing them all. I am highly anticipating your future posts!!

Wonderful to have you back Steven.
Loved the image...very good framing..and I look forward to the other shots involving other bridges..Thank you for sharing the history too :)))