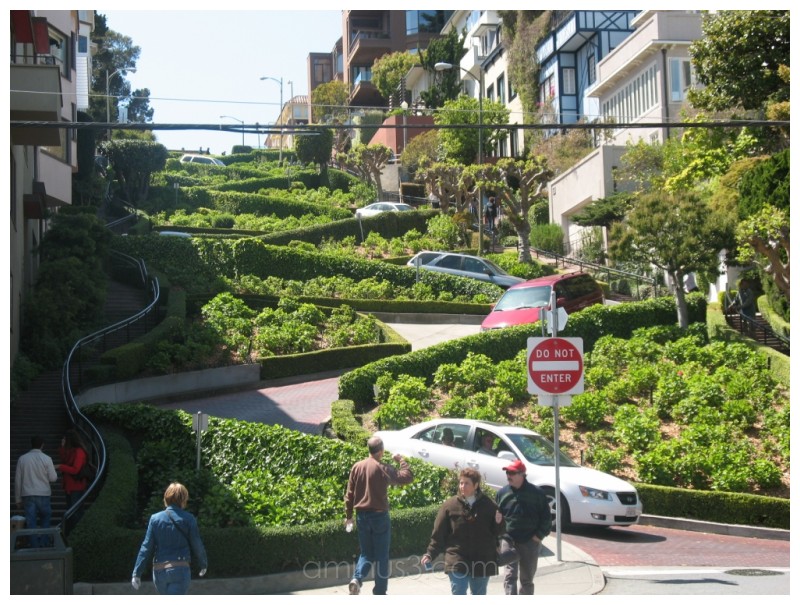 The Most Crooked Street

Posted by Steven (Chicagoland, United States) on 1 May 2008 in Cityscape & Urban and Portfolio.

Known as the most crooked street in San Francisco, Lombard Street, between Hyde Street and Leavenworth Street is a one-way street that has eight switchbacks or turns. The street is paved with red bricks and the speed limit is 5 m.p.h. Since I could not get up any higher from below Lombard Street to actually show the street from top to bottom, I thought it was fitting that I caught a number of cars heading down at the same time. As popular as you may think the street is to tourists, there weren't many cars traveling down the street.

Very unusual and interesting. What a fun street to drive on. Great image.

This is really something! You have captured it well - magnificent!

That is amazing... great composition...

that's crooked! great image! I wonder how long will it take to go down?

wow nice scenery. wonder how they drive out of that street. it looks not so easy to do that. ^^;;

Wow! now that is original, a great shot Steven.

Very funny (for the watcher) and a torture (for the driver) :)

Oh yes! I remember well this street when we last visited SF, unfortunately it was shortly after "el nino": the weather was very wet and the road along the coast was damaged... oh well! I guess this would be a good excuse to return :)
Well captured and I still wonder how they can drive down, especially because americans seem to love big cars...

First time I've seen this street and what a fascinating sight. A good way to cut down on traffic speed, too!