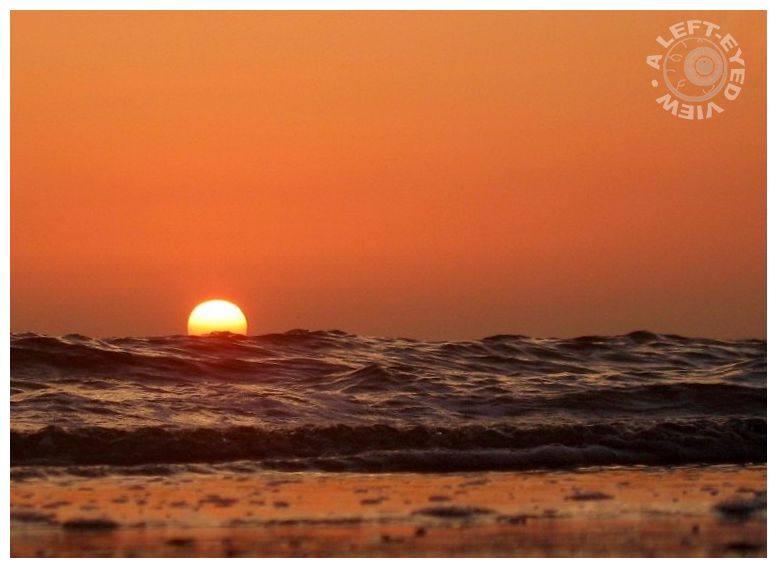 Posted by Steven (Chicagoland, United States) on 23 April 2009 in Plant & Nature and Portfolio.

This was the first of many sunset photos I had taken where I thought of the idea to put my camera directly on the sand just outside the waterline. I love the detail in the waves. Many sunset photos don't have so much detail in the waves as seen at the horizon. The water is usually seen as a straight line at the horizon. Somehow it makes the sun seem very small; like a fisherman's bobber in the water.

On a side note, I was happy to see that the compressing of the photo did not lead to "patchy" gradients in the sky. Photo taken March 15, 2009.

beautiful color and pov!! its like the sun is going for a dip to cool off! :)

So lively. The angle at which you have captured the shot is very innovative.

I hope you didn't get sand in your camera, really lovely shot and i really like the angle, worth the risk

@Alun Lambert: This was one reason I was glad my DSLR camera was left back home and I brought my "point and shoot." There were a few instances where it seemed the grains got into the projecting and retracting of the lenses.

Super shot and vibrant colours. I love the details of the waves too!

Hi Steven, I entirely agree with you, the low POV in this shot has give the waves extra height, and the color is just right. Good work !

They gradient tones in the sun make it look like the bottom is getting wet. Wonderful colours and very dramatic.

The PoV has really cranked up the drama in this one . . looks fully like part of a Climate Warming message !

lovely sunset! good composition, superb colours and i love the view just over the top of the waves!

Oh! This is an inspiring perspective, I'll have to try it, thanks!

interesting composition, first time I see a capture like that. beautiful! also the color gradient in the sky is nice...