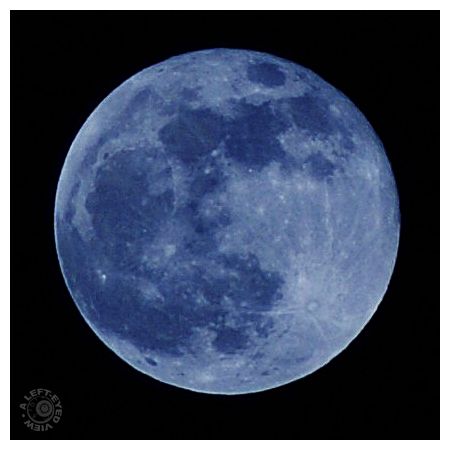 Posted by Steven (Chicagoland, United States) on 1 January 2010 in Plant & Nature and Portfolio.

A blue moon is a full moon that is not timed to the regular monthly pattern. Most years have twelve full moons which occur approximately monthly, but in addition to those twelve full lunar cycles, each solar calendar year contains an excess of roughly eleven days compared to the lunar year. The extra days accumulate, so that every two or three years (7 times in the 19-year Metonic cycle), there is an extra full moon. The extra full moon is referred to as a "blue moon."

Compare the moon's position from last night with its position on July 4, 2009. Both shots were captured from approximately the same spot....somewhere on my front porch. :-)

A super way to kick off the New Year.

Excellent! I appreciate the comparison back to your July post.
It was too cloudy here for an attempt, I'm so glad you captured it.
Happy 2010!

Bravo! A very Happy Blue Moon New Year to you!

Wow, amazing photo Steven! Happy 2010, I look forward to seeing your images during the year!

Yes, I'd heard this mentioned somewhere and had never known the origins of tat old phrase . . amazing detail in this.
All the Best for 2010, Steven.

Isn't it great how the same celestial body can look so different even from month to month! I love when the moon gets really big, orange and hazy. The blood moon? This blue moon though makes me want to sing ;) Bluueee moonnn.. Excellent detail Steven!

interesting description, thanks very much. happy new year to you

Happy NEw YEar to you and yours!