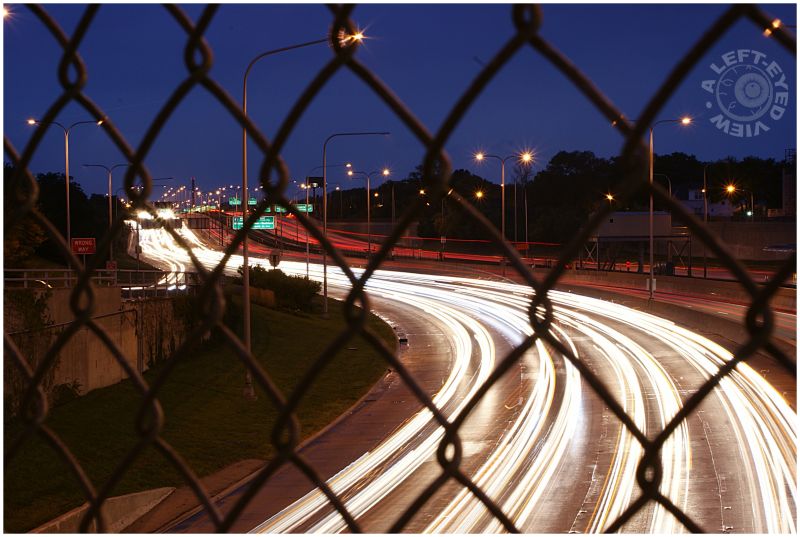 Happy Trails to You

Posted by Steven (Chicagoland, United States) on 11 February 2010 in Transportation and Portfolio.

I debated for a long time whether to post this photo, not really knowing what to think of the chain link fence that was captured here. There were a few shots that I captured where the lens was placed through the fence, but I couldn't get a steady shot on such a long shutter speed. Then, as of late, other fellow Aminus3 members posted similar shots where the chain link fence had a strong presence in their compositions and I realized how much depth the fence added in their captures.

Similar to writer's block, I am getting a case of "photographer's block." I've been wanting to try some indoor projects like water abstracts and the like, but it's just the set-up time that escapes me.

I'll be heading to Florida in March and Washington, D.C. in May. If anyone has any ideas on favorite spots to capture monuments in Washington, DC, particularly at night, please drop me a suggestion or two.

This capture is looking north at the south-bound lane of traffic (headlights) which is heading into Chicago on I-94. I love what the long shutter speed does to the street lights, creating a twinkling light.

I love the effect of the lights on the highway, a great "long shutter speed" shot ! Well done :)

excellent shot.. it make you feel you are actually there looking through the fence.. :)

I alaways enjoy looking at longg shutter speed photographs, particlarly with cars... I always think of a vulcano !

Great job and the fence adds rather than distracts.

The fence adds a touch of realism to the scene, since it's often the filter through which most of us get to view such a busy highway. The title is great, I like this picture.

Great compo. Super idea to shoot through this fence!

@MARIANA: You were one of the fellow Aminus3 members I spoke of above when I saw your photo from the other day.

I love the little starbursts in the street lights.

It is always cool to see other people's idea and try the same . That is the way I am learning all the time :) Thx :)

Well I'm glad that you decided to post it after all! Some indoor shots from you would be interesting. I don't think I've seen any from you. Have I? *awaiting patiently* :-D

Well, indoor shots as in from you home or studio setup, etc., not public buildings. Let me get my cuppa coffee...

The fence works here. It gives a feeling of separation and also adds that extra dimension for depth.

Very nice - the fence doesn't bother me at all - it gives me the feeling of standing there on the bridge - great night shot and I like the slow shutter speed!

I think the fence adds to it, I have taken shots at a baseball game through one and it came out pretty nice.

I think you had no choice. The trails are just too beautiful and interesting, so the fence really doesn't matter. To get rid of it, you would have had to do something illegal. :-D

A very beautiful photograph of night, I like the clearness of the lit trails, beautiful framing.
I like much your way of explaining the photograph, much details thank you Steven.

I think the fence is like caging.. maybe it has a feeling of being separated from the outside world which is brilliant with light but also.. sometimes too bright. So then the viewer needs to decide, does the cage protect or imprison the one trapped inside. I think graphically it works. Sometimes I can bokeh the fences out but you probably couldn't here. Still.. I don't think it detracts.

I like the effect on this one. It reminds me of a snake of fire. Nice long capture.

I should atleast attempt something like this. I hope my point and shoot is upto this. thanks for the inspiration.

I think it's a great shot. The chain fence really drives home the point that you are in the city. Nicely done.

I like the presence of the chain link fence. It makes the photo more ordinary and gives a creative feeling. Nice work.

I like the idea of the fence very much. It adds to the feeling of actually being there! A very cool image with the streaks and bursts of light.

When I first started shooting (in the days of film, when Roosevelt was still in office) I was mostly a candid shooter (exemplified by Karine's incredible work http://karinian.aminus3.com/). Off and on again over the years, I lately seem to be doing more set-up work for scenery and buildings. I can't seem to get the hang of macro work, but I'm thinking of trying some more action work this summer. Point being, maybe breaking out of the block can be achieved by going after a different style of photography.
As I've become somewhat dormant during the colder temps, I'm also keeping a list of things that come to mind, and I'll schedule some of those when summer comes about. I've gotten various inspirations from the twenty AM3 blogs I watch once or twice a week, but daily the Tribune's news photos (http://www.chicagotribune.com/features/chi-pod-pix,0,6615505.photogallery) provide different shots from different professionals around the globe, always good for generating an idea or two, and a new PC wallpaper every day.
As for DC, I suggest you get in touch with Candid1 (http://candid1.aminus3.com/), as she's a DC area resident who might be able to provide you ideas for your May trip. I'd love to spend a week wandering DC with a camera, and even Baltimore after watching the HBO series The Wire. I hope you have a good visit there. If you give me a general idea where you're headed in FLA, I can give you some ideas for there myself.
Good luck beating the block!

I have to echo others' sentiments - I feel the the fence adds to the shot, and gives it a real point of difference. Very nice!