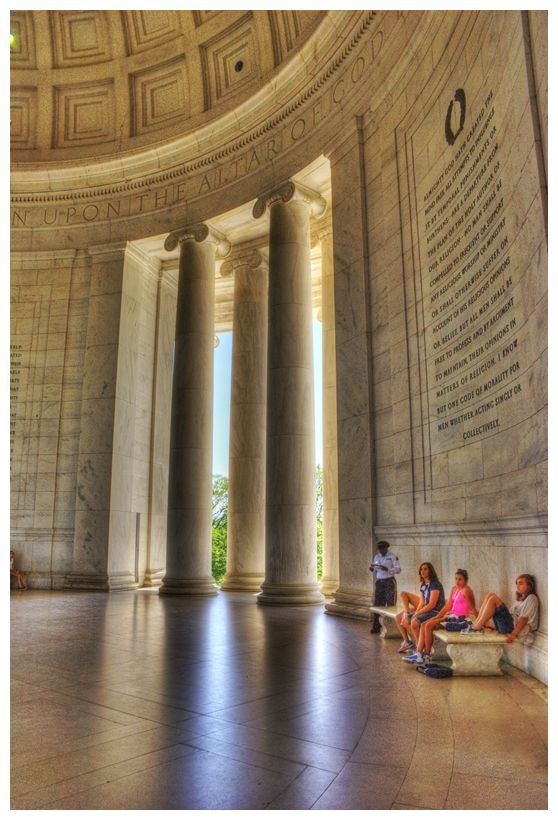 Posted by Steven (Chicagoland, United States) on 4 June 2010 in Architecture and Portfolio.

The interior of the memorial has a 19-foot tall, 10,000 lb bronze statue of Jefferson by sculptor Rudulph Evans, which was added four years after the dedication. The interior walls are engraved with passages from Jefferson's writings. Most prominent are the words which are inscribed in a frieze below the dome: "I have sworn upon the altar of God eternal hostility against every form of tyranny over the mind of man." This sentence is taken from a September 23, 1800, letter by Jefferson to Dr. Benjamin Rush wherein he defends the constitutional refusal to recognize a state religion.

On the panel of the southwest interior wall are excerpts from the Declaration of Independence, written in 1776:

We hold these truths to be self-evident that all men are created equal, that they are endowed by their Creator with certain inalienable rights, among these are life, liberty, and the pursuit of happiness, that to secure these rights governments are instituted among men. We...solemnly publish and declare, that these colonies are and of right ought to be free and independent states...And for the support of this declaration, with a firm reliance on the protection of divine providence, we mutually pledge our lives, our fortunes, and our sacred honour.

The excerpts chosen from the Declaration have been criticized because the first half alters Jefferson's prose (for the sake of saving space) and eliminates the right of revolution passage that Jefferson believed was the point of the Declaration, while much of the second half (from "solemnly publish" to "divine providence") was not written by Jefferson. Note also that it writes "inalienable", as in Jefferson's draft, rather than "unalienable", as in the published Declaration.

On the panel of the northwest interior wall is an excerpt from "A Bill for Establishing Religious Freedom, 1777", except for the last sentence, which is taken from a letter of August 28, 1789, to James Madison:

Almighty God hath created the mind free...All attempts to influence it by temporal punishments or burthens...are a departure from the plan of the Holy Author of our religion...No man shall be compelled to frequent or support any religious worship or ministry or shall otherwise suffer on account of his religious opinions or belief, but all men shall be free to profess and by argument to maintain, their opinions in matters of religion. I know but one code of morality for men whether acting singly or collectively.

The quotes from the panel of the northeast interior wall are from multiple sources. The first sentence, beginning "God who gave...", is from "A Summary View of the Rights of British America". The second, third and fourth sentences are from Notes on the State of Virginia. The fifth sentence, beginning "Nothing is more...", is from Jefferson's autobiography. Historian Garry Wills has said that this excerpt is "misleadingly truncated", because Jefferson's original sentence continued with the argument that free blacks and whites "cannot live in the same government." The sixth sentence, beginning "Establish the law...", is from an August 13, 1790, letter to George Wythe. The final sentence is from a letter of January 4, 1786, to George Washington:

God who gave us life gave us liberty. Can the liberties of a nation be secure when we have removed a conviction that these liberties are the gift of God? Indeed I tremble for my country when I reflect that God is just, that his justice cannot sleep forever. Commerce between master and slave is despotism. Nothing is more certainly written in the book of fate than these people are to be free. Establish the law for educating the common people. This it is the business of the state to effect and on a general plan.

The inscription on the panel of the southeast interior wall is redacted and excerpted from a letter July 12, 1816, to Samuel Kercheval:

I am not an advocate for frequent changes in laws and constitutions. But laws and institutions must go hand in hand with the progress of the human mind. As that becomes more developed, more enlightened, as new discoveries are made, new truths discovered and manners and opinions change, with the change of circumstances, institutions must advance also to keep pace with the times. We might as well require a man to wear still the coat which fitted him when a boy as civilized society to remain ever under the regimen of their barbarous ancestors.

That's so huge ! Very impressive how tiny we look. I love how lights enter the building. An effective tone-mapping.

You have caught the sense of vast space so well in this . . the tiny figures make good emphasis of that, too.

Super . Super compo , but light , and this light on the floor looks delicious !

Superb composition. Images on the soil are splendid. Have a lovely afternoon Steven.

Magnificent. The Jefferson Memorial is one of my absolute favorite D.C. places. Thanks also for sharing some of the inscriptions it contains.

A very beautiful image. Jefferson's words describing freedoms are ones we should remember it seems.

Almost clear enough to read and the reflections on the floor are so smooth, silken.. you are a master at processing.

incredible history and quotes - thanks! An amazing place!

History of america is very interesting for me. Love USA !

Beautiful shot! I like your careful hdr treatment here!

HDR on this interior is very special.

Having the people really gives a sense of scale.

Hi Steven - Not only is your photograph beautifully framed here, but your diligence in providing full and proper background information makes for a complete piece of art in it's own right. This is fantastic sir. Jeffersonian philosophy, what I know of it, is what a real America should be about.

Great eye for composition on this, Steven. You given the grand scale of this monument and balance to the image with the people. I like the amount of HDR you used here, and the soft reflection of the columns.
This image actually makes me want to go there.