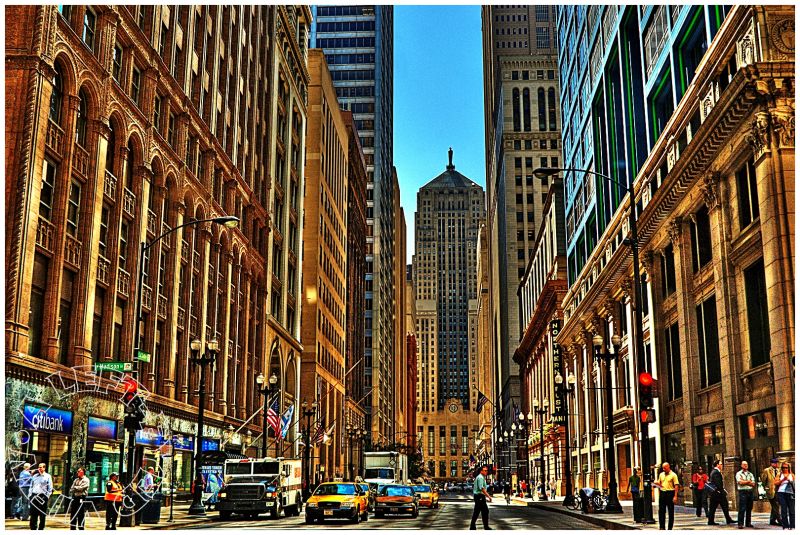 Posted by Steven (Chicagoland, United States) on 13 September 2010 in Architecture.

LaSalle Street was coined 'The Canyon' due to the tall, steep buildings that lie on both ends of the relatively narrow street. The buildings along the canyon have their faces inward to emphasize the feeling of a canyon. The canyon is in the form of a box canyon and uses the Chicago Board of Trade Building to form an abrupt end. The view from the Chicago Board of Trade Building emphasizes its likeness to a canyon. It is generally not permitted to put signs, banners or other infrastructure that hangs into the canyon.

Love all the Buildings, cracking shot

Gorgous. Superb photo. Your framing is excellent and the texture is very nice. I like it. Have a lovely day Steven.

Wow ! This is excellent Steven ! I really like the way the HDR enhanced all the beautiful details here... Worth 5***** for me ! Have a nice day :)

terrific hdr really works with this

hey, nice to see you back AND - WOW , what a shot !!! BRAVO a million stars for all these tiny details and fab processing . very grand return ;))

correct me if I am wrong , but this one is the best of all your cityscapes . right ???

@MARIANA: As far as a composition that is HDR-processed, I think I might agree. But I am somewhat partial to this one as a non-HDR comp. :-)

Wow..Superb shot of these buildings...A canyon indeed..
Your link to Marianna was also an awesome picture..

Perfect clarity and actually with your perspective the buildings on the side seem to lean in a little drawing your eye down the street. You must have been crossing the street or stepping into it taking this. That guy crossing with the light looks like he's watching you :)

@Dutçh: Believe it or not, I was in my car stopped at the light. I was heading to the new "eyeball" sculpture that was erected at Van Buren and State Street.

Then your windshield was really clear. I usually end up with.. something on the glass that gets in the photo. I saw the eye recently.. weird. You know.. we need to make something as weird and get payed whatever that person got.. to put it up like that! It's cool in a bizarre way.. but hey I can be bizarre :D

@Dutçh: I actually thought of sticking my camera up through the sunroof, but I KNEW that I would NOT capture what I was hoping for. You bizarre?? NEVAH! ;-)

This is one five star effort Steve. It's incredibly good, the compo, the POV, and the processing.

Canyon is what popped into my mind. Very nice shooting PoV.

I do love these deep perspective views in your big cities.

I wonder if my GPS would work down in that canyon. ;-) This is a lovely view with those golden tones.

'It's a canyon' was my first thought - love this perspective.