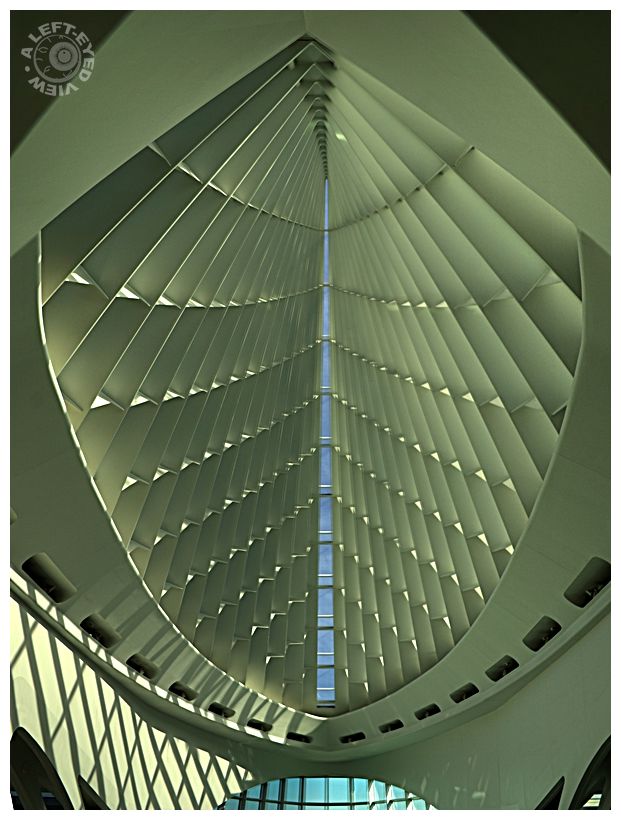 Posted by Steven (Chicagoland, United States) on 12 November 2010 in Architecture and Portfolio.

View of the interior ceiling in the main exhibition space of the Milwaukee Art Museum. The Milwaukee Art Museum (MAM) gained international recognition with the construction of the white concrete Quadracci Pavilion, designed by Santiago Calatrava (his first completed project in the United States), which opened on May 4, 2001. The structure contains a movable, wing-like brise soleil which opens up for a wingspan of 217 feet during the day, folding over the tall, arched structure at night or during inclement weather. The brise soleil has since become a symbol for the city of Milwaukee.

That is very cool. It seems like the inside of a group of sails. Excellent shot.

Taken from a vertigo, attracted by a large architectural vagina.... Lovely perspective, is'nt it? :)

What a fantastic view!

Wow ! This is really amazing ! The framing is perfect and the architectural details are so beautiful... Have a lovely day Steven :)

Steven, I can't decide what's best here .. the lines, the tones, the crop, the gentle light, the compo/symetry - awesome

BRAVO ..... a brilliant architectural rendition of this building.
The symmetry, the sparkling light, the shadow lines... are all pure perfection.
And thank you, too, for the wonderful description of this gorgeous building !!

Beautiful as always, Steven. What you did with the cathedral blew me away....

A gorgeous image of this wondrous structure! Bravo! And to think I still associated Pabst Blue Ribbon with Milwaukee. ;-)