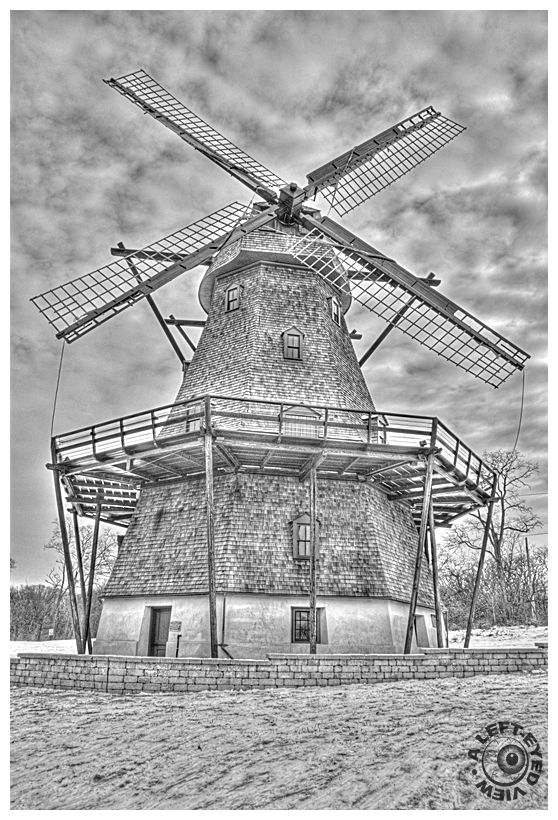 Posted by Steven (Chicagoland, United States) on 20 January 2011 in Landscape & Rural and Portfolio.

The Fabyan windmill is an authentic, working Dutch windmill dating from the 1850s and sits upon a hill on the eastern bank of the Fox River in Geneva, Illinois. Completely refurbished and operational, the windmill is a majestic sight that complements its surroundings in what was once the estate of Colonel George Fabyan. Now part of the Kane County Forest Preserve District, the windmill grove is the most visited in the region and is a widely popular living history exhibit.

During the mid-19th century, the Fabyan Windmill was constructed by German craftsmen, Louis Blackhaus, and his brother-in-law Freidrick Brockmann, on a site at Meyers Road near 16th Street in Lombard, Illinois.

By the early 20th century, the windmill had fallen into a state of disrepair. In 1914, George Fabyan purchased the windmill for approximately $8,000 from Mrs. Fred Runge. He then had it moved to its present location in Geneva just on the east side of the Fox River, close to Illinois Route 25 in July 1915. Fabyan spent an estimated $75,000 to have it moved, reconstructed, and restored.

The Edgar E. Belding Company of West Chicago was contracted by Fabyan to move the windmill from Lombard. It was slowly dismantled piece by piece, with Roman numerals carved into the beams and braces to facilitate correct reconstruction. Some of the largest beams had to be hauled by a team of mules.

The windmill was reassembled on its present site by a Danish millwright named Rasmussen, with the assistance of John Johnson and six others from the Wilson Bros. Construction Co. After nineteen months, the relocation and reconstruction were completed. The mill was a wonder in its day, because it is thought to be the only fully automatic wind-driven mill of its type.

What a fantastic windmill

Oh yes very nice!
Was it processed in Photomatix before the black and white conversion or after?

@Curly: Using Photomatix 4.0, I set the "color saturation" to zero in the "grunge" setting. It was such a cloudy day that the photo didn't have much color to begin with.

Superb angle you get here. The B&W tones and processing remain sensitive to its history. Good story - and great restoration work.

intriguing processing here - looks like a pencil or charcoal drawing, and that's meant as a compliment! interesting story to go with the windmill!

What a marvelous story - just wonderful - It saddens to know that the Windmill was "let go" but restores some faith that a family member stepped back in to save it. He was probably pretty ticked off that it was let go, but it shows how much he valued it to get it back into the family. The design and shape of this windmill really is unique I think. The image here, and the treatment you have chosen, are again, perfect. In my opinion, the work you have done to convey this to us - in image and in word - is equal in heart to the work done by the family and re-builders and movers...Beautiful job, Steven!! I will always remain a big fan...I just love your work!

This windmill is in a far better shape than the few that you can find in my region. Thanks for this interesting history lesson!

What a beautiful structure with an interesting history. A grand photo of this old beauty.

I visited Geneva 40+ years ago. It was wonderful then and I'm sure even better now. By the looks of this image, it seems still a photographer's paradise.

Hah yes.. been there! You went at a great time of year for this though. First of all no people to erase from the image and secondly the snow really adds to contrast when shooting black and white. I like it. If you remember this was the mill the old couple I shot were looking at but across the bridge. Here. This is just a wonderful place for photographs. Good for you for braving the cold!

I've seen this but not with this treatment.... great choice!