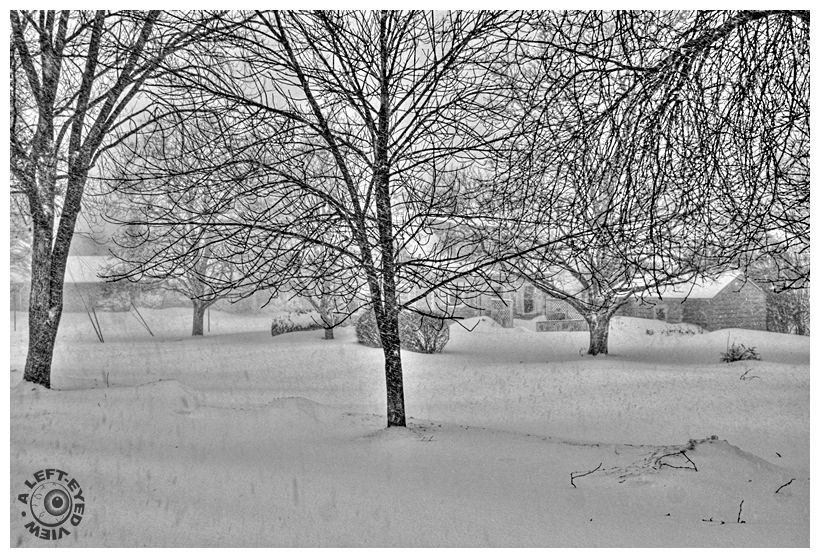 The Morning of the Blizzard of 2011

Posted by Steven (Chicagoland, United States) on 8 February 2011 in Plant & Nature and Portfolio.

View outside my front door at 7:15 AM as the Blizzard of 2011 continued to deliver more snow after a late afternoon and night of non-stop snow and wind gusts up to 60 MPH the day before.

The winds brought down many branches from the honeylocust tree in the parkway overnight, some of which are visible here. About two hours later, they were buried.

By 2:30 PM, the sun was out and was actually looking nice outside.

Just snow, trees and wind and some houses in the back. I love the way you've cropped here (the top of the trees), it really emphasizes the power of the blizzard in this place precisely and that we're in. Impressive phenomena.

Very nice capture! I've been following the weather reports from back there.

Wow, I guess this is not your usual dose of snow at this time. Very impressive (and a beautiful shot, too)!

@MadScientist: No, but this is our fourth winter in a row where we have received more than 50" of snow. ACK!

Our township did a lot of trimming just before the storm so I didn't see downed branches like that. I mean the morning before the storm started they were still out there. This however was a very common scene.. and now its snow mountains everywhere!

Very nice and artistic sense of cold and snow did you move to be successful.

in this shot it looks really calm! I think this turns during the day to the worst!

Another great rendition,Steven - I love your treatment on these. By the looks of the trees, it appears you have maybe 4 + feet in this view?? And as you say, more came as that day progressed...I was following the storm too of course and just amazed at what we were seeing!. I am just glad you are ok. Thnak you for this!

The neighboring houses are in a white haze of snow. Not so much fun except for the kids who got snow days.

That is very nicely done.

Beautiful shot, but I like Okinawa where the snow NEVER falls. YEAH!

You've had more than we but we had our share...