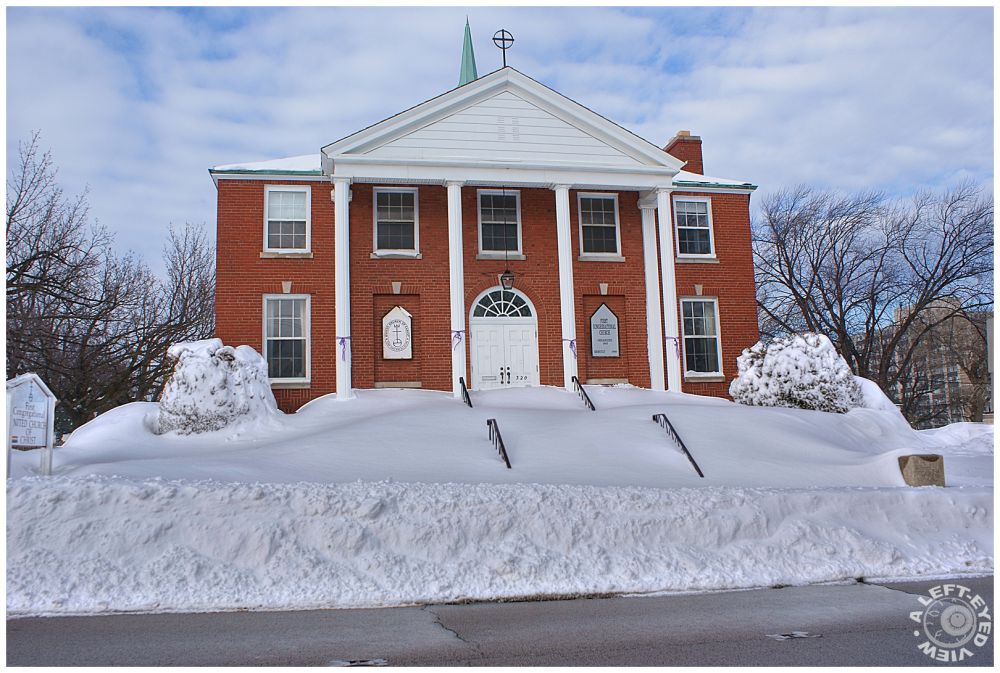 In Store for a Very Long Sermon???

Posted by Steven (Chicagoland, United States) on 10 February 2011 in Plant & Nature and Portfolio.

Looks like members of First Congregational Church are in store for a long sermon as it doesn't look like the congregants will be getting out any time soon. Two flights of stairs and two landings are buried under huge snow drifts with only the tops of hand railings showing signs of what exists there. The lowest flight of stairs and its hand railings are completely buried in snow that was plowed off the road.

Scene spotted outside First Congregational Church in Waukegan, Illinois at 3:10 PM. Earlier that morning, the weather looked like this. Now, sunshine and blue skies, and a lot of snow removal.

i would love to be the first down them steps, great shot

Beautiful, but it's probably much warmer inside than out. Usually these aren't hell-fire-and -brimstone types messages so it won't get too hot.

beautiful shot
now I know where all our snow is gone

wow . . that's wonderful . . the church house looks almost like it was made for this moment, somehow !

The perfect title for this fantastic image. Hopefully there is a ground floor entrance in the back! ;D

HIlarious title Steven....and an amazing scene...along with your one from the other day - I guess it would be ok to say here (in sight of the church) Good Lord!!!

Great catch - let's hope some of this melts over the weekend! :)

Funny shot, bravo! Maybe I should come over with my snow blower?

beautiful framing and also very funny!
how will they get in or out? who knows!

Incredible! I wouldn't want to shovel that snow away!

Hmm this can't be the same day. The streets are dry ;) Great perspective shot really showing the depth of the snow against the railings.

There's no sermon, it's just too damned cold to go out! Great find.

Lots of snow. I mowed my lawn yesterday. ;-)

@Steve Rice: I'm looking at this positively knowing that I won't have to water my lawn this Summer to keep it from dying. And there won't be a drought either. It has been surprising to see some fellow Aminus3ers post photos showing signs of Spring. :-) My sump pump will be going like crazy in March. :-)

@London Caller: There are a few Yeti that show up from time to time. ;-)

Well seen - gives the viewer a good sense of just how much snow really fell.

wow, we haven't had this much snow here since i was a kid! in a way i miss it, in most ways i don't! a very apt title to a very impressive image!