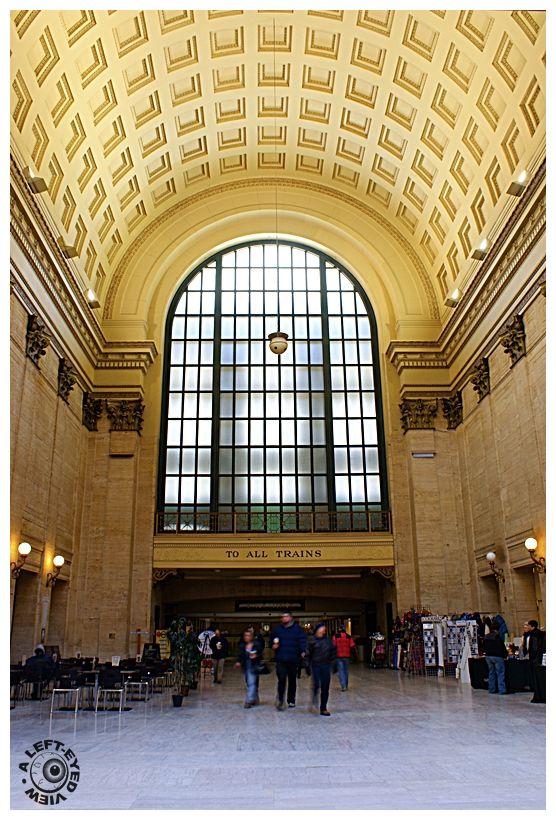 Posted by Steven (Chicagoland, United States) on 4 March 2011 in Transportation and Portfolio.

A VERY short barrel-vaulted concourse leading people to and from the trains at Union Station in Chicago. It would have been a much more dramatic capture had the vaulted ceiling been a little longer. Actually, what I cropped out of this image was the cornice that went around the entire Great Hall and therefore continued across this open space. Had the cornice not continued across this vaulted space, I could have stepped back another 10-15 feet.

Makes me wonder if this barrel-vaulted space is actually a space added onto the Great Hall and was not part of the original construction of Union Station. It doesn't make sense to continue the cornice across an open space. It would be like seeing the cornice continue across the window in the background.

love the movement in the people, cracking

great shot, the light is fantastic and a nice effect by the motion blur

You know I'm a wee bit disappointed, I was hoping to see a slow shutter shot (around 1/15 second) with masses of people moving around in this magnificent hall. Never mind, it's a fantasy of mine which I am going to try when I find the right location, unfortunately I won't be able to come to Chicago to do it.
I bet you surprise me tomorrow :-)

@Curly: I'll try to surprise you on Monday. My visit here shortly before noon doesn't generate a lot of people. But Monday's should be better for you. :-)

You may have a good point there, Steven..I see what you are saying. Nevertheless, the view you have provided us here is phenomenal! The detail in that ceiling is amazing...a beautiful capture by you, sir!!

I don't really understand the text but I really enjoy the photo.

@Kenny: My photo next Tuesday should better explain it for you. :-)

Great sense of height! I understand Curly's point, but I've rarely been in there at a crowded time of day. I've noticed that if you pass through there often enough, you'll see groups of Amish venturing into the "big city." It's one of the best places I've been to, for the quality of the people-watching.

Your description of the cornice does seem strange. Perhaps it is an add-on. Even though it may be short, the ceiling is high and beautiful.

I love that window.

Nice perspective. I like how the roof contribute to the composition.

The ultimate in simple messaging ! A lost art for sure.

Stellar detail here.. I like the tall profile of the image.

Well you had a ball in the station, this serie is awesome and you did some very good job !!!!