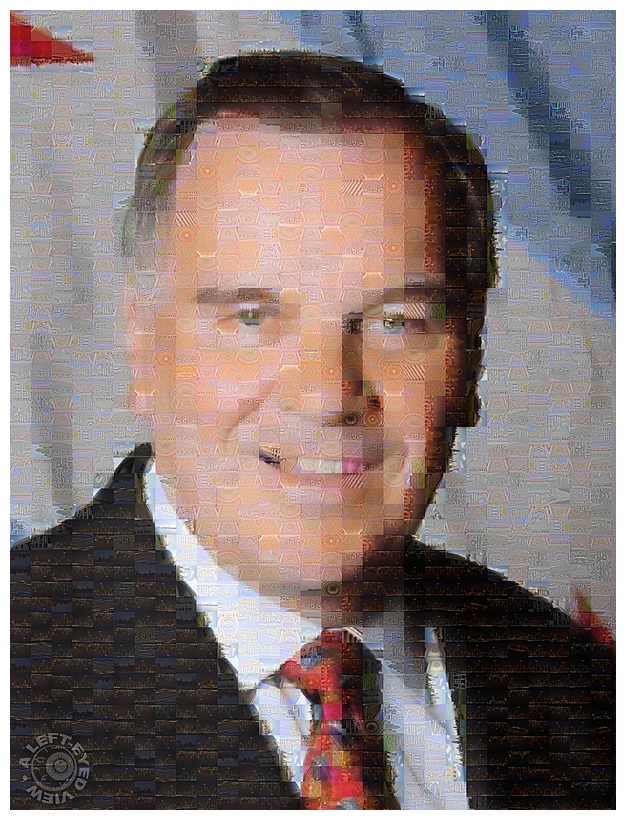 Posted by Steven (Chicagoland, United States) on 19 May 2011 in People & Portrait and Portfolio.

A mosaic I created (utilizing AndreaMosaic) of Chicago's outgoing Mayor, Richard M. Daley, who decided to retire after 22 years in office. Photos that I had taken in 2009, 2010, and 2011 of Chicago buildings, parks, skylines and landscapes were used to create this portrait of Daley. It's interesting to note how many times my photos of the Tiffany dome at the Chicago Cultural Center and GAR Memorial Hall were repeated in his face. That's where you see the circular forms in his face. His suit coat is composed of mostly nighttime captures of the City's skyline from the Adler Planetarium.

Daley’s greatest accomplishments probably relate to his efforts to beautify the parks and boulevards and to promote Chicago as a destination city. The country's mayors and the American Architectural Foundation honored Mayor Richard Daley for his efforts to transform the city.

Back in April, Mayor Daley accepted an award for leadership in urban design at a U.S. Conference of Mayors meeting. Daley was lauded as a "transformative change agent" for projects such as Millennium Park, dozens of neighborhood libraries and the construction of iconic buildings -- things many cities hope to emulate.

Splendid idea and a very impressive result. From what you say here, we might well say the same about Mr Daley.

I have to say it looks an awful lot better from a distance.
Clever stuff though.

@Curly: It's something I toiled over when creating this mosaic. After creating a mosaic with 5,000 mosaic tiles, it looked too much like a photograph and not so much like a mosaic until I settled upon a 2,000 mosaic tile layout. I wanted people to be able to identify, or recognize, some of the images used.

A wonderful tribute to the man, from the way you describe his achievements. This is a clever and creative portrait. The many shots that make up the mosaic also represent a fine allegory for the way he transformed the city - now more than the sum of its parts.

a really outstanding processing and composition! which software you used for this compo?

What a magnificent job, Steven....I am not surprised but I am so impressed...all the labor this had to have taken to get done you are a true artist sir - brilliant!

This is amazing. Very clever and very well done.

I like this. I wish that I could see the individual pictures of the buildings better. I can see all of the hard work and effort that you put into this composition.

this is truly and honestly AWESOME - what a cool idea, what excellent execution! i'm much impressed!

A wonderful portrait and style of works! Well done and very unique!!!!

WOW, this is fantastic! I would love to see a detailed version of this. How long did it take?

Wow, that's pretty cool, Steven! I wonder if some of the curved highlights on the face could be toned down to not stand out so much, or would that take away from the mosaic feel? Regardless, good work!

I like how you've processed this. He was a great mayor and his shoes will be hard to fill.

This is the kind of mayor I want to have for my city! Very cool processing!

This is very cool! I wish I could see your photo in higher resolution. I will put trying that software on my project list.