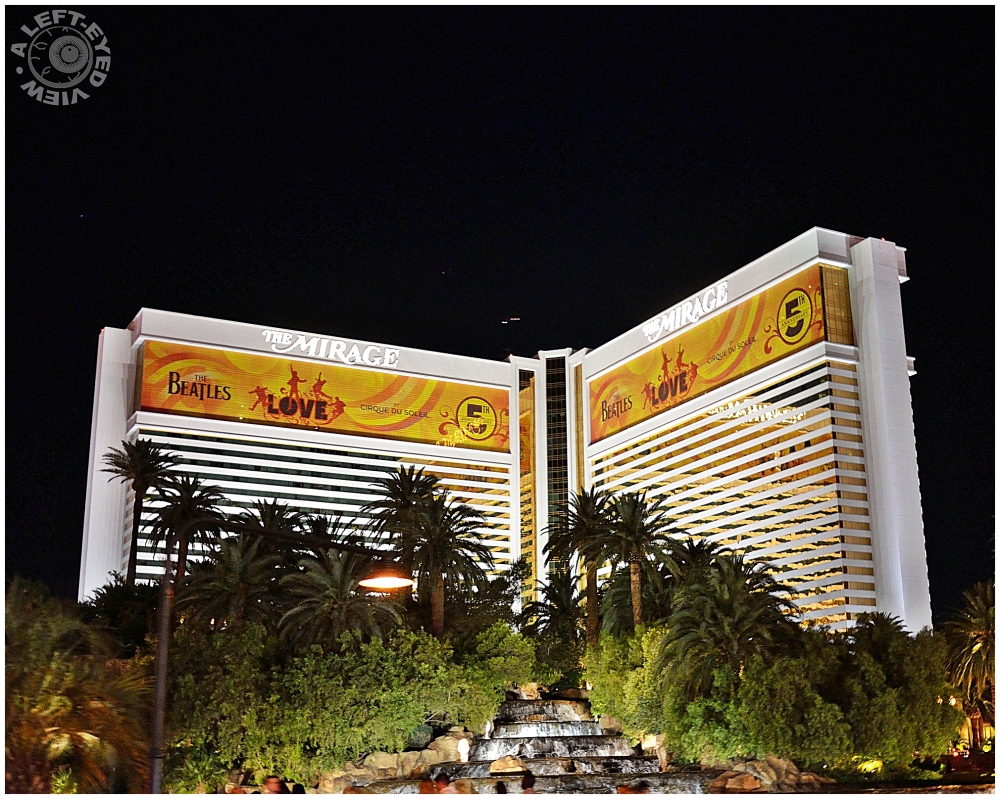 Posted by Steven (Chicagoland, United States) on 17 August 2011 in Cityscape & Urban and Portfolio.

The Mirage is a 3,044 room hotel and casino resort located on the Las Vegas Strip. The marquee in front of the Mirage is the largest free standing marquee in the world.

The Mirage was built by developer Steve Wynn and designed by Joel Bergman. It opened in November 1989 and was the first resort that was built with the money of Wall Street through the use of junk bonds. It was built on the site, formerly occupied by the Castaways and previous to that, the Red Rooster Nite Club.

The Mirage was the most expensive hotel-casino in history, with a construction cost of $630 million. The hotel's distinctive gold windows get their color from actual gold dust used in the tinting process. It was reported that the resort would have to bring in a million dollars a day to pay off a 7-year construction loan. But in fact The Mirage did so well, the loan was paid off in just 18 months.

Its construction is also considered very noteworthy in that Wynn had set a new standard for Vegas resorts, and is widely considered to be the father of today's Las Vegas. Prior to The Mirage's opening, the city was experiencing a decline in tourism that began in the 70's, especially around the time that the state of New Jersey legalized gambling and tourists (in particular those on the East Coast) began to frequent the casinos of Atlantic City. Also, this was a time when Las Vegas was no longer considered a fashionable destination, so a new, high-profile, project was necessary to jump-start the ailing industry. When it opened, The Mirage was the first casino to use security cameras full time on all table games.

Nice shot ! Thanks for the infos !

a marvellous night shot.
I remember the a fantastic dinner at the Mirage when we stayed at L.V. the last time (15 years ago).

Without a doubt, these velvet black night skies are really showing off the light and colour of the buildings.

Wonderful image of this magnificent building. :)

A superb framing and great light !

A beautiful capture of this impressive hotel. Thank you for intresting information regarding the hotel. Well captured and presented.

great information thx! the mirage, perhaps one of the most popular hotels which refuse for las vegas!
great nightscape! love this series!

Perhaps the most famous of all the hotels/casinos in Vegas. This city truly comes alive at night as evidenced by your shots. Excellent work!

Very nice series on "Sin City". ;-) I have not been there for several years, so it's amazing to see how much it has changed.

Definition of mirage: something that appears real or possible but is not in fact so...
Here it must apply to the possibility of winning in the long run, not to you photo, it does exist! Well done...

When we lived there in 1977-78, the Castaways was there,....I remember when they started to build this, even though we weren't living there anymore...this definitely WAS the precusor to all the others we have seen in your marvelous series, Steven. Your impeccable attention to detailed text is only surpassed by the quality, depth, beauty, and perspective of your compositions. If folks pay attention, we are getting a first class history and a "Firster Class" view of this city. This is Las Vegas now and your images really display the town in a wonderful light. Well done, Steven - I Love your work!!

@Denny Jump Photo: Thank you for your gracious comments, Denny!

Beautifully capture and framed! Thumbs up!

Gorgeous night shot! Which hotel did you stay in?

A pretty shot of this casino. Interesting back story, too.

A very interesting bit of recent history. Thank you Steven. This place is clearly no "mirage" in terms of being a money-maker and a true attraction. Nice photo!