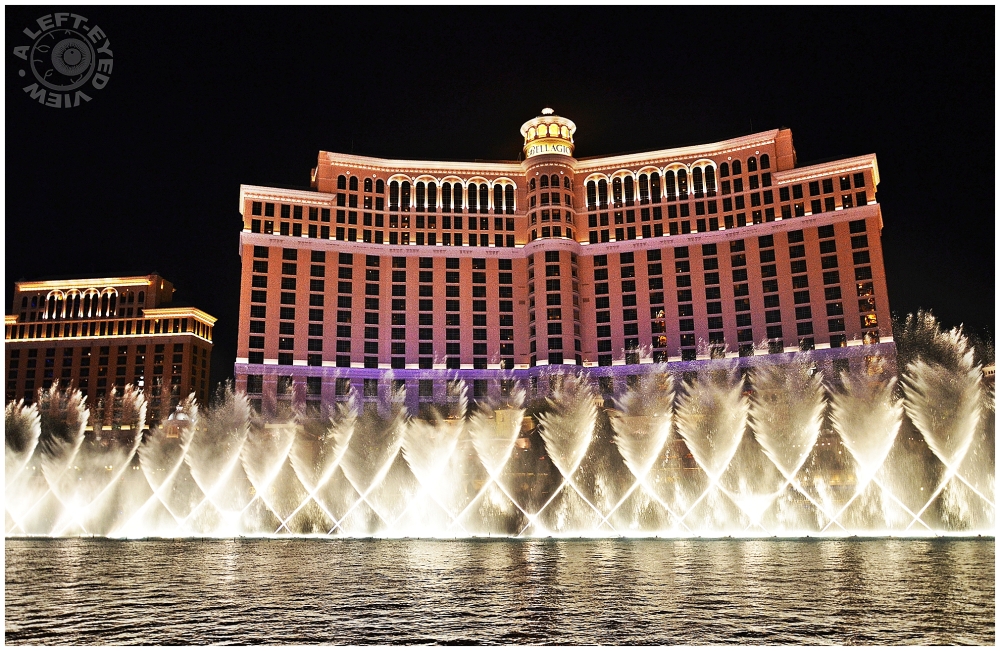 Posted by Steven (Chicagoland, United States) on 26 August 2011 in Cityscape & Urban and Portfolio.

The Fountains of Bellagio is a vast, choreographed water feature with performances set to light and music. The performances take place in front of the Bellagio hotel and are visible from numerous vantage points on the Strip, both from the street and neighboring structures. The show takes place every 30 minutes in the afternoons and early evenings, and every 15 minutes from 8:00 PM to midnight. Before a water show starts, the nozzles break the water surface and the lights illuminating the hotel tower turn to a purple hue (usually), or red-white-and-blue for certain music. The fountain display is choreographed to various pieces of music, including songs by Andrea Bocelli, Frank Sinatra, and Gene Kelly.

The fountains are set in a 9-acre man-made lake. Contrary to urban myth, the lake is not filled with treated greywater from the hotel. The lake is actually serviced by a freshwater well that was drilled decades prior to irrigate a golf course that previously existed on the site. The fountains actually use less water than irrigating the golf course did. They incorporate a network of pipes with more than 1,200 nozzles that make it possible to stage fountain displays coordinated with more than 4,500 lights. It is estimated that the fountains cost $40 million to build. The fountains were created by WET, a design firm specializing in inventive fountains and architectural water features.

Four types of nozzles are used for the various effects:

Interesting formations are made here which seem to resemble leaves from an oak tree.

The song, "My Heart Will Go On" by Celine Dion was played during this capture.

This is my fave of the series, and I like the whole series. What a cool effect on the water, and another rock solid night shot.

very beautiful capture of the dance of water and lights of building ! Superb !

Spectacular finale! This has been a great series.

My favourite one! Very nice!

Nice! I love how you froze the water.

A beautiful capture of the magical dancing water and beautiful lights. Well captured and presented. A very beautiful series. Have a good weekend.

Fantastic once again - you've captured the water in such a way that it looks like leaves or feathers lined up above the water. Beautiful shot Steven!

This is certainly my very favorite so far. The color and the water are gorgeous. Great capture!

Look at them dance! A very beautiful scene.

a perfect capture of this, i think most famous one in las vegas!

This is gorgeous. When I was little my parents took me to see the Dancing Waters in Washington, DC. It was a show with water sprays and then they would shine different colored lights on the water. I thought it was so magical. This reminds me of it but on a so much grander scale. Beautiful!

Very beautiful series of this fountain. You captured every choreography it does with excellent lighting! Two thumbs up!