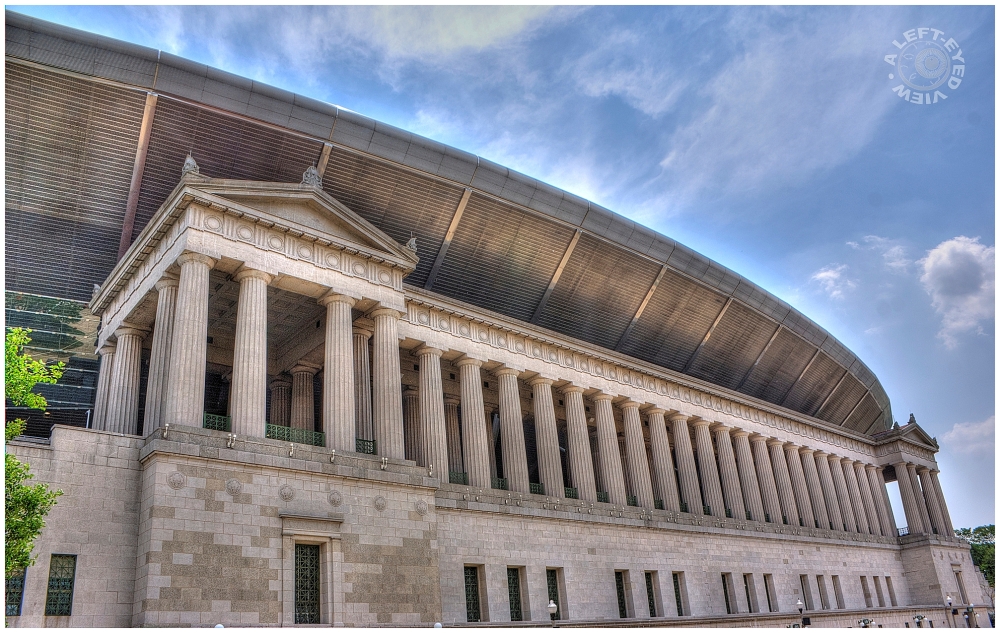 Posted by Steven (Chicagoland, United States) on 2 September 2011 in Sport & Recreation and Portfolio.

Soldier Field serves as a memorial to American soldiers who had died in past wars, hence its name. It was designed in 1919 and completed in the 1920's. It officially opened on October 9, 1924, the 53rd anniversary of the Great Chicago Fire, as Municipal Grant Park Stadium, changing its name to Soldier Field on November 11, 1925. Its formal dedication as Soldier Field was on Saturday, November 27, 1926, during the 29th annual playing of the Army vs Navy game. Its design is modeled on the Greco-Roman architectural tradition, with these doric columns which rose above the original stands. However, after being renovated, the new stands now dwarf the columns, as seen above.

Reaction to the renovation was mixed. The New York Times ranked the facility as one of the five best new buildings of 2003, while the Chicago Tribune architecture critic Blair Kamin dubbed it the "Eyesore on the Lake Shore."

On September 23, 2004, as a result of the 2003 renovation, a 10-member federal advisory committee unanimously recommended that Soldier Field be delisted as a National Historic Landmark. The recommendation to delist was prepared by Carol Ahlgren, architectural historian at the National Park Service's Midwest Regional Office in Omaha, Nebraska. Ahlgren was quoted in Preservation Online as stating that "if we had let this stand, I believe it would have lowered the standard of National Historic Landmarks throughout the country," and, "If we want to keep the integrity of the program, let alone the landmarks, we really had no other recourse." The stadium lost the landmark designation on February 17, 2006, primarily due to the extent of the renovations.

It's a lovely building, only they never should have allowed to 'park' that flying saucer in it. Sometimes innovation is not a good thing.

Stunning shot.
I can understand the reactions, but to me the development looks to be quite sympathetic and doesn't completely overpower the original design.

A fantastic angle ! Very beautiful ! And thank you for the explanations !

Wonderful wide shot to show the grand scale of these doric columns. Interesting information as well. Shame about the delisting - the old and new work quite well - especially as seen in your previous two shots of the stadium.

Impressive structure, well-pictured here. Kind of an inspiring story and yet a sad interlude in its being delisted. I'm just thinking that less than 100 years ago, this was all new architecture. The 2003 addition simply speaks to its living history still going on, and speaks for the original vision having a continuing future. I'm sure somewhere along the line it will be re-listed, and deservedly so. Those visionless people who seemed to need to make an example of the rennovators may hopefully begin to realize their mistake and perhaps act to reverse it. The combination of the old with the new is still an amazing piece of architecture and history, at least from this perspective.

I don't know where you stand on the issue as a Chicagoland long timer, Steven. And I would certainly respect your opinion. But from where I stand (or sit) I have to say that I would align myself with Glenn's thoughts (Viewfinder). I think that it is tragic that they delisted this facility due to the renovations to enlarge the stadium. They obviously failed to take into account the fact that, in addition to its status as an historic building, this is an existing, operatinng place of business, and in order to maintain it's viability and "business health," the additions had to be made. Furthermore, their position statement alluding to the point that this would be a precedent if they allowed it to remain listed, is totally contradictory to many decisions they have undoubtedly made in the past for facilities that needed one kind of improvement or another in order to remain safe, in business, whatever! This was and is a large facility and I would be willing to bet my next paycheck that they took the position that they did on an emotional level rather than an objective one, merely because it is indeed large and very "visible" which makes absollutely no sense at all and is certainly not an objective decision. Finally, in doing all of this and trying to avoid setting a precedent, they have actually set one heck of a huge precedent by now putting forth the impression to all that a large facility is more subject to denial than a small facility. I am sure they did not think about this but this is what they have done! Look out public libraries...don't add that new wing...Look out museums, dont approve that second floor...watch out old mansions..., I could go on but I am sure you get the point.

I am sure you have your views so I do appreciate you allowing me to express mine from afar....Mine may be completely off line but that's what I think....Thanks Steven! BTW this is another awesome shot sir!!!

Firstly, a fantastic example of architectural photography. It is a beautiful wide view and is perfectly framed. Aesthetically speaking, from this vantage point I do not like the additional construction, which resembles a landed space ship atop this beautiful old building. Emotionally speaking, I don't think it should have been de-listed or touched in any way prior to that as a catalyst for that de-listing. What it stands for should always remain, respected and remembered.

Beautiful stonework and the columns are so majestic. I am saddened that this beautiful historic structure was de-listed. The integrity of the original building is still intact so I cannot understand what their point was. Great POV and light!

Fascinating image and debate here. I find myself respecting a whole range of incompatible views most of which are expressed here. But my own feeling is that, despite (or because!) of the inconsiderate changes, it should not have been de-Listed.

Beautiful architecture. Interesting information. Sad this has been delisted. :)

amazing view and an impressive building!

what a unique and unusual combination of styles and functions! i can readily understand and sympathize with the controversial discussion the changes provoked! you captured this from a very advantageous and effective angle, steven!

It's a fantastic light catcher, offering its most beautiful profile to our eyes. Very unusual architecture, mixing the old greec style with modern style. The top makes me think of the ceiling of a staduim somehow. Your PP is perfecrly balanced, you've made the right adjustments.

fine capture. so much history there

ps - one of chicago's icons

I have to admit I have always liked the design of Soldier Field before and after the renovation.

Another beautiful hdr - I love how you've left some shadows here Steven.

Personally I think the original building with its decorative neo classical stately appearance has not been improved by the renovation. I agree with Denny Jump Photo who sums it up in its entirety.

Great shot ! I have never been that close to the Stadium, only seen it from train and across street from Museums.

Terrific shot which really demonstrates the problem with the renovated building. The history seems to have been compromised.

Very beautiful perspective effect here... I really like it and your post-processing work is very well done ! Have a lovely weekend :)

This 'bowl' design needs getting used to, but I've seen worse architecture. Wouldn't it be possible to list only parts of the building?