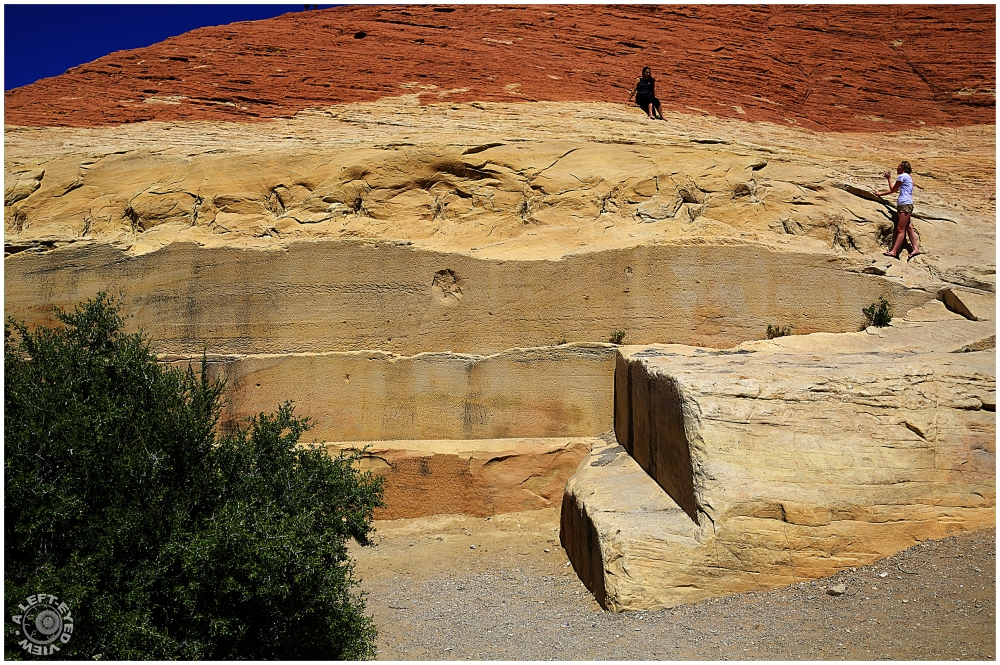 Posted by Steven (Chicagoland, United States) on 13 September 2011 in Landscape & Rural and Portfolio.

In 1905, the Excelsior Stone Quarry began operations here and became one of the first early industries in the Las Vegas area.

The giant blocks, some weighing as much as 10 tons, were quarried with channeling traction equipment. These massive blocks were loaded onto wagons and pulled with a 17-ton steam-traction engine known as the "Big Devil." The sandstone was then shipped by rail to markets in San Francisco and Los Angeles for use as decorative building facades.

The sandstone was of high quality, but production was expensive and unprofitable. With the discovery of similar sandstone deposits closer to the railroad, the Excelsior Stone Quarry was shut down in 1906.

Later that same year, other operators reopened the same quarry, but even with better equipment, the operation still proved to be uneconomical. In 1912, cutting at the quarry stopped forever.

great shot and interesting background-information.
I like contrasts of the deep colors.

You are probably fortunate that they stopped quarrying, can you imagine the huge scar that would have resulted?
Great shot.

Sad to hear of this quarry's history, the sandstone is magnificent in this view, but
who uses such wonderful material to build anymore? Beautiful capture !

Incredible story - great shot with wonderful textures we see in the sandstone.

Can't believe that even during that time some people would see these rocks and only see them as a way to make a profit. Wonderful shot and story Steven!

Wonderful textures and colors, the people put the stone into perspective. Interesting history.

A handsome shot and interesting story. I love the feeling of dry hot heat !!

wonderful this sand stone, and it changes the color by different light! great!

Wow, this looks like the remains of some ancient temple step formation. I've never been inside a quarry like this. Great photo!

The people really give us an idea of the size of this place. Interesting shot.

And here it is in this state in this State! I love sandstone and I love to see it on the facades but am happy for this zone here, even though it is cut into, nevertheless, we get to see the "inside"" of this beautiful stone so there is SOME good here. A magnificent job as always, Steven, and your text is SO very much appreciated...great piece here!

Thanks for sharing Steven. Red Rock Canyon is amazing and you expressed that in your pictures. If anyone is visiting Las Vegas I would strongly recommend to visit Red Rock Canyon as well. It is only forty minutes away by car, west from "sin city".

Great colours and textures. Thanks for your detailed technical and historical explanations.

They did some pretty smooth cutting way back then. A lovely shot with people for scale.

superb. the people are integral

Fabulous and magnificent capture and process!

very attractive, warm color of the stone! reminds me of the limestone quarries on the island of malta. almost all the buildings on the island are built with this stone, which turns a rich, dark yellow when hit by the rays of the setting sun!