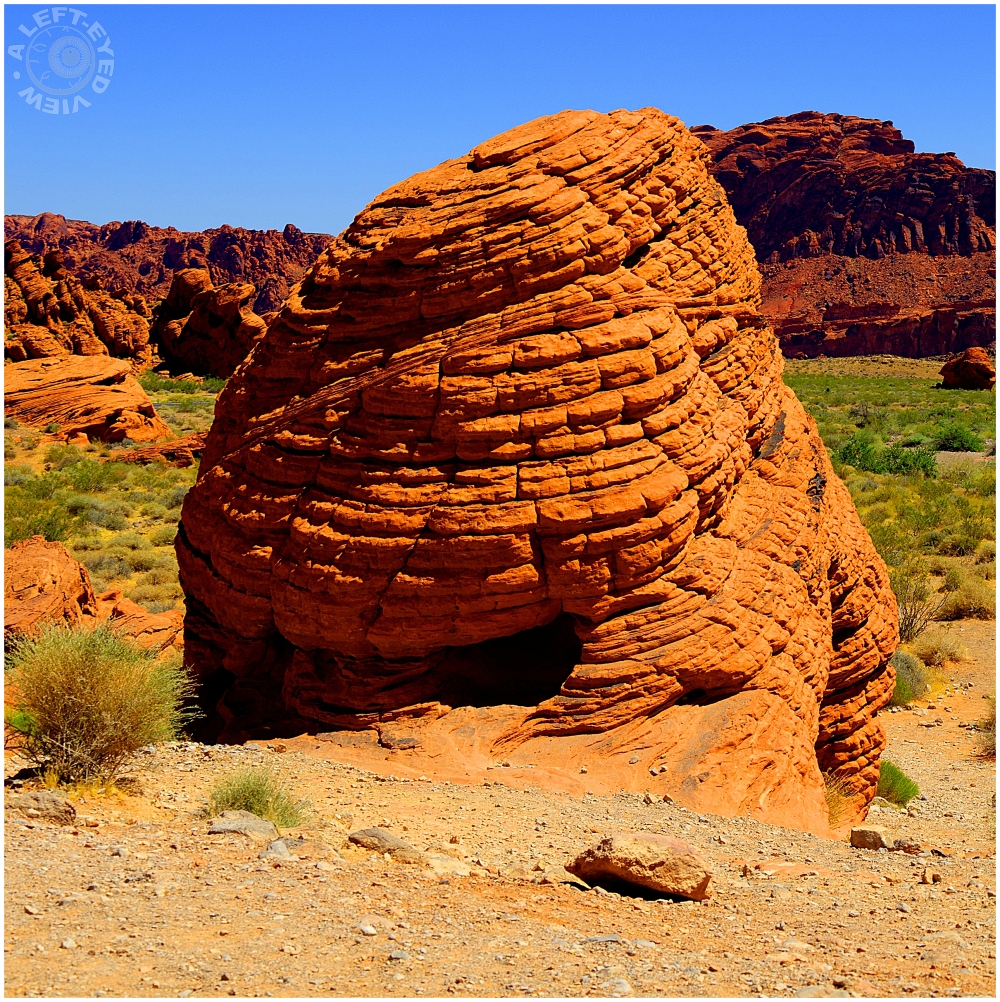 Posted by Steven (Chicagoland, United States) on 26 September 2011 in Landscape & Rural and Portfolio.

We now start a photographic tour of Valley of Fire State Park in Overton, Nevada. Our first stop was to see the beehive formations made out of sandstone. The Beehives are so named for their resemblance to beehives. This effect is caused by erosion, mostly wind. Wind erosion has two main processes, deflation and abrasion. Nearby is evidence of the process of deflation where sand is removed by wind and transported across the desert forming sand dunes and abrading rock surfaces along the way.

Although wind abrasion is not often as significant as the abrasion process in streams or along shores, it is significant over long periods of time. The result are sculpted rocks with unusual shapes. In a fluvial environment erosion results in rounded shapes as rocks are tumbled end over end. The wind based abrasion pits, polishes, facets and shapes the exposed rock surfaces in as many ways as the wind can blow.

As the sand is ultimately deposited in dunes somewhere, it takes on the shapes of ripples and waves like sand under flowing water. As the sand piles up, dunes get larger. As the wind continues to blow, the dunes migrate in the direction that it does. The shifting winds and the continuing deposition of sand creates an effect called cross bedding. This is caused by the sand being blown down the slip face or leeward side of the dune.

Over time the dunes that were created in this area became fossilized. Geologic process have reveal these fossilized dune fields and exposed them to erosion. At the Beehives we see the process repeat and reveal itself. The wind-blown sand abrades the softer rock first, articulating the layers of sand originally deposited hundreds of millions of years ago as the courser, leeward deposit remains. The beehives are located near the west entrance of the park.

Fascinating picture Steve and an interesting read on how they were formed.

Terrific warm light and color. Nature has so many amazing displays.

So wonderful warm colours. Thanks for the info how they were formed.

Great colors and a strange but eye-catching rock shape.

So many forces at work in this one spot . . fascinating natural sculpture !

A sense of wonder with these rocks and lovely capture of the warm ochre colours.

Amazing capture of this intresting and ancient rock formations. Beautiful colours and texture. Thank you for very intresting information.

What a fabulous structure. Erosion processes and the results are so intriguing. Wonderful shot Steven!

Fantastic post! The text is great for enhancing such a wonderful photo. Wow, what a structure.

marvellous colors in your shot and thank you for the stunning background information.

What an amazing narrative as well as the image, Steve! It pretty much "flies in the face" of those who like to dismiss or ignore the importance and intracacies of earth's evolution...just fantastic! I am ashamed and embarassed to say that in the 7 months I spent living in Las Vegas (working for an engineering company in their remote office) I never once made it out to Valley of Fire...and this was way back in 1978 -79 when I had the time and ability to do it...no excuse...So now I need to get back at least by way of your wonderful series which I definitely look forward to following! ;-)

a fascinating whims of nature! the color again is so unbelievable for me, i love that landscape!

I love those intense colors in the rocks. This beehive is wonderful.

Hello Steven from Chicagoland.
This is an excellent composition.... it is one of nature's fine sculptures and you have done it justice....peter:)
Thank you for your first visit to my site today.... you will always be welcomed here:)

stunning colors of this fascinating sandstone shape! interesting info, too!

Amazing color and what an interesting formation. Great information. I have never seen anything like it. Beautiful composition!

impressive structure and you captured it superbly with excellent sharpness and detail!

Amazing warm colours and great detail. And thanks for the interesting information. Excellent. :)