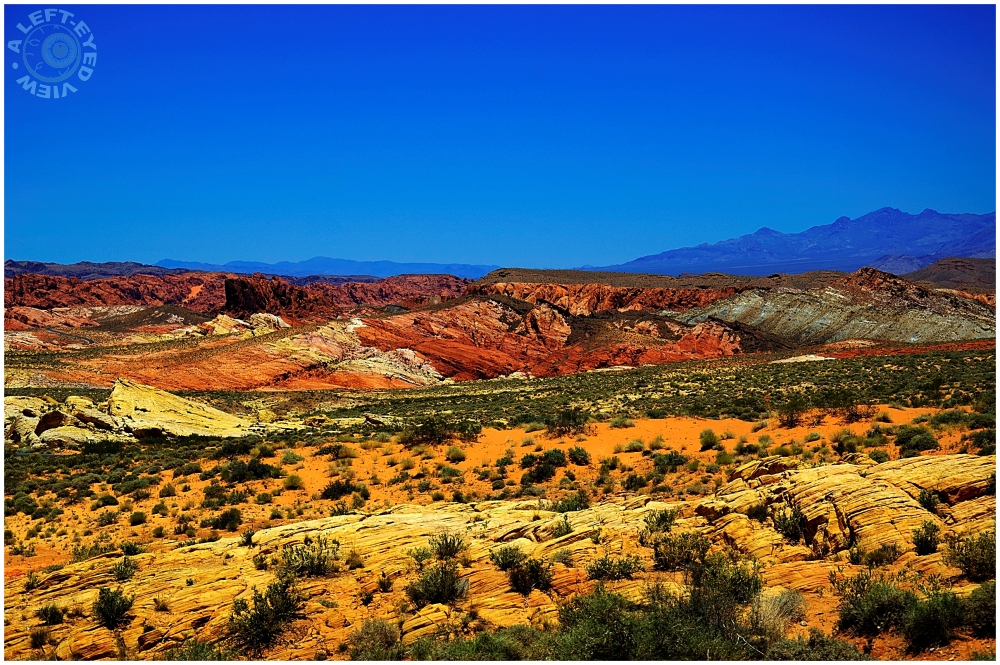 Posted by Steven (Chicagoland, United States) on 27 September 2011 in Landscape & Rural and Portfolio.

Rainbow Vista is a lookout over the north part of Valley of Fire. It looks north toward the White Dooms and Duck Rock areas. The colors of the sandstone is more of a range of yellows with an occasional red area. This is in contrast to the rest of the park where the sandstones are entirely or mostly red. In many places the reds, gold and yellows are mixed and blended in, looking like they were stirred quickly.

fantastic view into this gorgeous landscape - and I agree with MissT: the blue sky is the perfect contrast to the sandstone.
wonderfully captured shot!

The colors are really amazing; and you always have these wonderful skies.

Absolutely beautiful.. I dont know how you process your photos.. these are amazing.

Colors are really wonderful. I love !

Incredible colors of this beautiful landscape !

Wow... This is wonderful, all these layers of colors are truly beautiful ! Have a lovely day :)

@Stephen: I love your description Stephen. I may just rename my second post of this.

What a landscape. You do it justice with these crisp and colorful photos.

Wow. What a beautiful view. Fantastic colours and a lovely blue sky. Amazing. Love it. :)

This is probably the most beautiful shot I have seen of this area ever...just fantastic Steven...you are the king!!! No other words needed ;-)

D7000 is so powerful!
Both the cool and warm colours were captured beatifully.

this color are really an "eyecatcher" SUPERB!!!!!!

Incredible, Steven, I can look at this image a long time and all I get out of
it is pretty much envy. The super saturation of the colours just sets you up
to view this masterpiece, your technique outdoes so many. So beautiful !!~

The colors here are breathtaking. Just beautiful! This is a wonderful composition! 5*'s!

What a beautiful landscape!