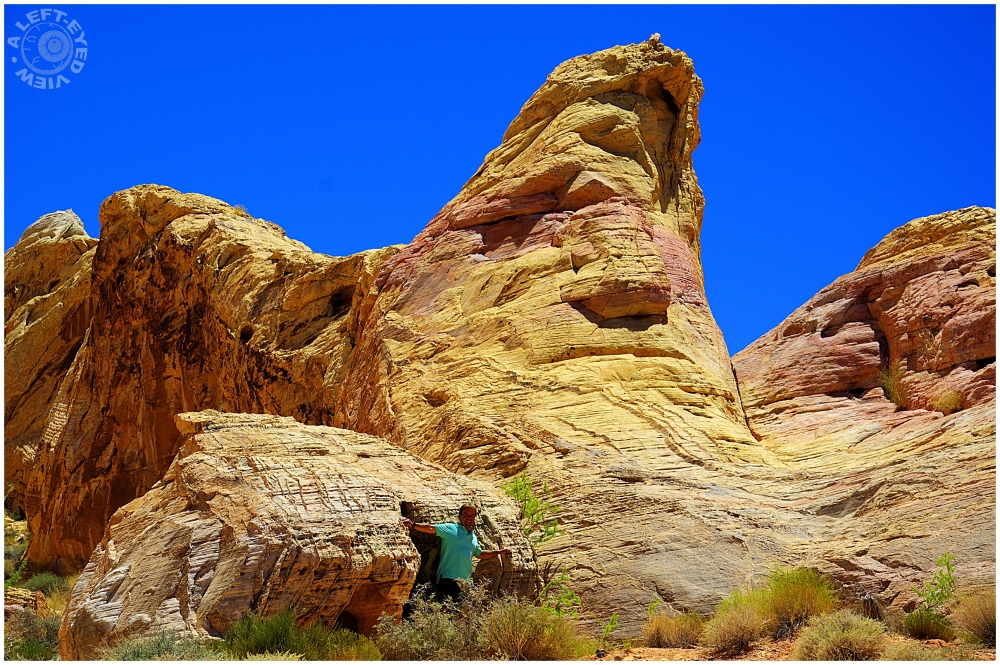 Posted by Steven (Chicagoland, United States) on 7 October 2011 in Landscape & Rural and Portfolio.

While pulling over to have lunch, I couldn't help but notice what looked like facial features in the rock formation near a picnic area. Other tourists noticed it as well and when I asked the tour guide about it, she stated that she had never seen it before and doubted that it was recognized and named by the state park. I found that hard to believe since the face seemed so obvious.

The tour guide then asked me to name it. I couldn't think of a name and she suggested Stonehenge Steven. She then had me run up to the rock and pose with my find. When other photos were shot from the side, the facial formation took on the shape of a crescent moon.

Even the smaller rock formation to the right looks like half of a smiling face with squinted eyes.

great find and story behind it.

Excellent find.. and now it has a name.. nice to meet you :)

indeed, it does look like jubba the hut (to me at least; maybe the park authorities had never heard about him ... ;-))

A great image and a very interesting story to this shot !

On what page of the next edition of Frommer's will I find directions to Stonehenge Steven?

The strange shapes do seem so very lifelike, and faces come into focus frequently
when the stars are aligned right, and our imagination takes us far away into a
strange domain, the man coming out of the rock almost seems incongruous, so
out of harmony, as if he is in a playpen, and yet the rocks seem petrified as they
lurk in wait, ready to take control once again.

Super cool! Definitely a strong brow, nose, eye... a rock not to be messed with!

It does look like a face! Beautiful color and a great portrait of both of you!

Well, I must say that's a fantastic find, and you certainly deserved to have your photo with it. Next time you go, everybody will know who you are. ;-) I must say, I do quite like his hairdo! Wonderful find and shot Steven!

Cool photo! Great visualization. I see a mucho grande nose poking out of that formation.

another superbly sharp and detailed photo!

Well, of course we can all 'see' this face, now that you have posed with it.
Hope the name sticks. Not everyone has monumental rocks named after them. Terrific.

I think Steven needs to be in more of his creations. Great to see you, my friend.

It really is....great find and capture!

great storie, so you find an entrance in the hall of fame! ;-)
amazing whim of nature! suberb!

How great to have your own rock formation named for you. It's good that you are in the shot to give perspective as to size. I can't really tell since you are so far away, but I think you both even have the same smile. ;-) But wait, I thought the same thing yesterday about the lizard. LOL

Super story! (I think it's smiling.)