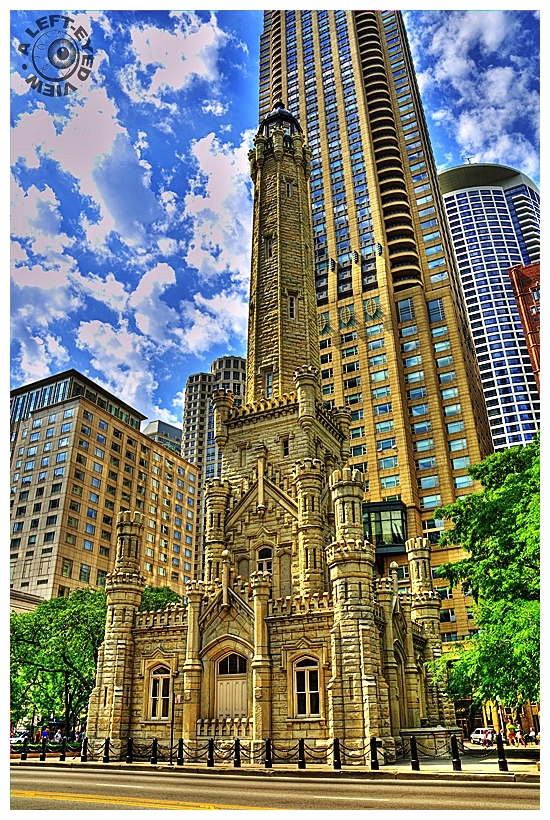 Posted by Steven (Chicagoland, United States) on 20 October 2011 in Architecture and Portfolio.

The tower, built in 1869 by architect William W. Boyington from yellowing Joliet limestone, is 154 feet tall. Inside was a 138-foot high standpipe to hold water. In addition to being used for firefighting, the pressure in the pipe could be regulated to control water surges in the area. The tower gained prominence after the Great Chicago Fire of 1871. While some incorrectly believe that the tower was the only building to survive the fire, a few other buildings in the burned district survived along with the tower. But the water tower was the only public building in the burned zone to survive, and is one of just a few of the surviving structures still standing. In the years since the fire, the tower has become a symbol of old Chicago and of the city's recovery from the fire. In 1918, when Pine Street was widened, the plans were altered in order to give the Water Tower a featured location.

The structure has not been universally admired. Oscar Wilde said it looked like "a castellated monstrosity with pepper boxes stuck all over it," although he did admire the arrangement and movement of the pumping machinery inside. The Water Tower's castle-like style inspired the design of many White Castle restaurant buildings. The Tower was named an American Water Landmark in 1969.

looks like a beautiful painting with all those delicate details

A far better view than your earlier version for sure, we get to see the remarkable Disney like characteristics of the building, with better scale of the tower behind. Wonderful processing, as always.

Fantastic colores and well made processing of this amzing building!

Monumental ! What a strange but yet interesting combination of architecture ! Your tonal range process just fits perfectly here.

Great find. I love the tower! Looks at its best surrounded by this modern architecture.

I have always loved this building and oddly enough it has always been a visual reference point for me amidst all the other taller building.

wonderful image and treatment, and a very interesting story! however - as to the aesthetic properties of the tower, i side with oscar wilde, the old cynic ... ;-))

This is beautiful. Gorgeous architecture and what an interesting history. Beautiful composition!

Superb! This is one great looking building.

Wow, what a remarkable structure - it looks so out of place amongst the skyscrapers surrounding it. Well done Steven!

I think those pepper pot crenulated towers are especially awesome and stand tall
next to the modern building. Your treatment has bonded this link beautifully !~