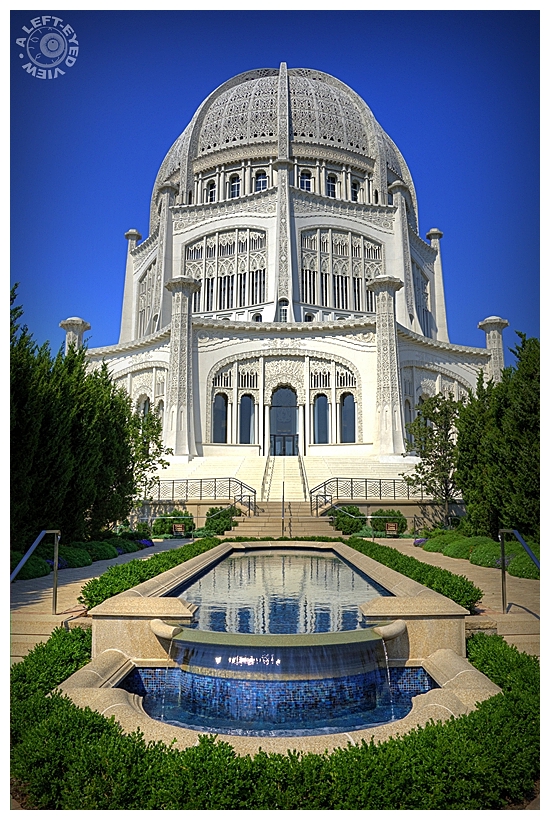 Posted by Steven (Chicagoland, United States) on 24 October 2011 in Architecture and Portfolio.

The cornerstone for the Bahá'í House of Worship in Wilmette, Illinois was brought to the site by Nettie Tobin and accepted in 1912 by 'Abdu'l-Bahá during his only visit to the United States and Canada. Construction began in 1921 and was completed in 1953, with a delay of several years during the Great Depression and World War II. The Wilmette House of Worship is the largest and the oldest surviving Bahá'í House of Worship. Known by Baha'is as the "Mother Temple of the West" and formally as the "Bahá'í House of Worship for the North American Continent", it stands in north suburban Cook County, on the shores of Lake Michigan. The cladding is made of white portland cement with both clear and white quartz aggregate. It has received numerous design awards, and is a prominent Chicago-area landmark. In 1978, it was added to the National Register of Historic Places.

The height of the auditorium is 138 feet, and the diameter of the dome is 90 feet. The auditorium seats 1,192 visitors. Like some other Bahá'í temples, it has a gallery balcony from which choirs or soloists may perform. No instrumental music is allowed during services in the auditorium, although all kinds of music may be performed in the meeting room below. In general, no videography, photography, or any other activity inconsistent with quiet meditation is allowed in the auditorium. The building is open to visitors every day of the year. A Visitor's Center, located underneath the main auditorium, includes restrooms, offices, a bookstore, library and research room, a viewing room for films, and a Foundation Hall, which is used for large meetings and holy day celebrations. The large underground area also contains offices not regularly open to the general public, including a media center, studios, and the Baha'i Archives, which can be visited by appointment.

The principal architect was Louis Bourgeois, but the interior cladding was designed by Alfred Shaw of Shaw, Metz, and Dolio. Engineering plans were prepared by Allen McDaniel of The Research Service of Washington, D.C. The general contractor was George A. Fuller, Co. Both the pioneering exterior and interior cladding were fabricated and constructed by John Joseph Earley and the Earley Studio.

The Bahá'í House of Worship is a place of worship for all people. The only decorative art inside and out involves shapes and designs made by intersecting lines. There are no images of people or places. The building itself is decorated inside and out with verses from the Baha'i Writings, all of them by Bahá'u'lláh. As there are nine entrances to the building, there are nine verses above the doors and nine inside the buildings above the alcoves.

The verses outside are engraved into the stone, in large legible letters. Above the doors are small engraved versions of the "Greatest Name", one of several Bahá'í symbols and an elaborate decorative design that includes the letters ABHA, representing the prayer "Alláh u Abhá" (God is Most Glorious) in Arabic. It is the numerical value of these four letters in the words abha and baha (for Bahá'u'lláh) that add up to total nine, one of reasons Bahá'í House of Worships are nine-sided.

The most decorative element on the outside of the building is the tracery on the nine towers. These are intertwined with the generally recognized symbols of many world religions, including the Cross, the star and crescent, the Star of David, and the original swastika design, an ancient symbol having arms bent at right angles, used for thousands of years as a representative symbol of world religions such as Hinduism, Buddhism, and Jainism. The only decorative symbol inside the auditorium is a large, lighted version of the Greatest Name in the exact center of the inside of the dome.

For many years the Bahá'í House of Worship was associated with a "home for the aged", operated by the U.S. Bahá'í community. The Bahá'í Home has since closed, although the building remains in use for a local Baha'i School and regional training center.

On April 30, 2007, the Bahá'í House of Worship was named one of the Seven Wonders of Illinois by the Illinois Bureau of Tourism representing the Chicago metropolitan area.

Lovely shot of a very decorative building Steve, the foreground is a real pleasure.

How unusual to find such architecture there. I've first though I was in India. Amazing.

You have a good eye for great architecture. This is a majestic view and the intricate detail is superbly captured.

a masterful framing a greeting and good work realisado

A fabulous shot of this beautiful building. Beautifuly captured and presented.

This is an absolutely superb composition and shot Steven - excellent!

A fabulous and informative post. Exquisite architecture deserves this kind of wonderful photography to do it justice.

wonderful captured and of course, this framing is so outstanding! perfect!

nice and impressive piece of architecture

Steven, this was just a fantastic and VERY informative (as Rick notes) narrative - I really appreciate that. I knew virtually nothing of what you have noted...thank you so much! I'll bet the accoustics inside that auditorium are to die for (no pun intended)...and my impression of your composition here, in genereal: This deserves SPOTLIGHT! Stupendous sir!!

What beautiful architecture and a lovely reflection. Perfect framing. Very informative. I did not know much about the Baha'i faith even though I grew up with someone who was of this faith.

A magnificent structure. Your beautiful photo does it justice.

mighty impressive, esp with the pond and "waterfall". must look a bit out of place in "american" surroundings ...