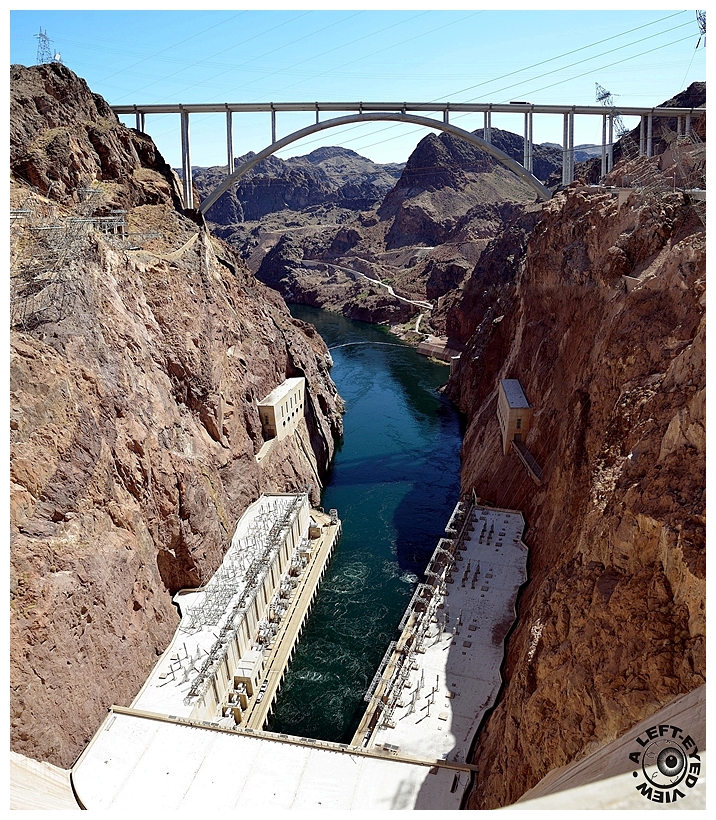 Posted by Steven (Chicagoland, United States) on 4 November 2011 in Business & Industry and Portfolio.

The Mike O'Callaghan – Pat Tillman Memorial Bridge, the key component to the Hoover Dam Bypass project, was the first concrete-steel composite arch bridge built in the United States, and it incorporates the longest concrete arch bridge in the Western Hemisphere. Opened on October 19, 2010, this four-lane highway bridge provides a crossing of the Colorado River for U.S. Route 93, linking Nevada with Arizona. At 840 feet above the Colorado River, this bridge is the second-highest one in the United States, following the Royal Gorge Bridge.

The bypass was constructed to improve safety, security, and traffic capacity. Through extensive studies, this bridge route was determined to be the best route for the bypass.

U.S. Highway 93, in conjunction with U.S. Highway 60 via Wickenburg, Arizona, is the primary highway between Phoenix, Arizona, and Las Vegas, Nevada, two cities that have seen great increases in population since the completion of the Hoover Dam. The section of U.S. 93 that approached and crossed Hoover Dam was not adequate for modern traffic needs. It was too narrow, with just one lane in each direction. It had many dangerous curves, including several hairpin turns, and it had poor lines-of-sight, especially at night.

Through highway traffic combined with sightseeing and pedestrian traffic at the dam, the traffic often came to a standstill. As a consequence of the heightened security measures following the terrorist attacks of September 11, 2001, truck traffic over the Hoover Dam was diverted south to a bridge crossing the river at Laughlin, Nevada, in an effort to safeguard the dam from hazardous spills or explosions. This disruption, however, did not eliminate the threat of a possible attack on the dam, since regular traffic still passed over it. Hence, the new bypass and the bridge are intended to improve travel times, replace the dangerous roadway, and reduce the possibility of an attack or an accident at the site of the dam.

More than 17,000 cars and trucks are using the new bridge daily, a number expected to grow by 50% over the next 20 years.

I dont understand, how they have build that bridge. It is thing, what I wander allways, when I see bridge like that. Fine picture.

A very impressive view indeed ! Must have been difficult to build this in such place.

A fantastic achievement in the world of civil engineering!

Even more breathtaking scenery than yesterday, the deep pools of blue really draw
me in to this incredible view, such magnificent framing.

wonderful compo with much more details than yesterday !

Love the way the arch of the bridge frames the vista along this deep canyon. Incredible how you include so much of this landscape into one breath taking view!

@Stephen: I actually panoramically stitched two photos together, one on top of the other. :-)

You can't help but feel awe over this kind of conception and construction achievement. A wonderful image packed with dramatic power.

Such an amazing place, and the bridge actually fits in nicely with its surroundings. Very cool shot and info Steven!

I can see why my dad liked this place so much.

I had no idea this bridge was behind the dam. It reminds me of the Bixby Bridge in the Big Sur area, the one our late friend Monterrey John used to love so much.

@Viewfinder: Late friend????? I noticed that he hasn't posted, but I didn't realize he passed. :-(

Stunning perspective from above. The composition with the bridge in the background is terrific.

a really spectacular view down! superb!

This is an excellent composition, and more of that warm/cool contrast that I love!

one of the iconic places of the southwest, superbly seen and taken!

A beautiful shot of this fine new bridge. It is great in bypassing the nasty bridge snarl.