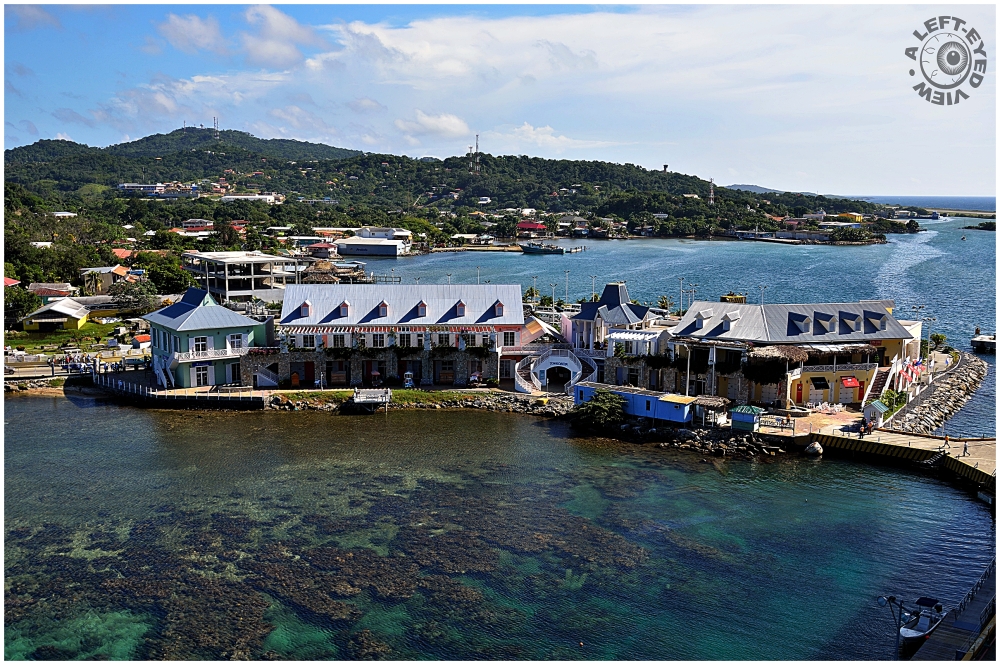 Posted by Steven (Chicagoland, United States) on 2 December 2011 in Landscape & Rural and Portfolio.

View off the back side of Norwegian Cruise Lines ship as we docked at the port of Roatán. Roatán, located between the islands of Útila and Guanaja, is the largest of Honduras' Bay Islands. The island was formerly known as Ruatan and Rattan. It is approximately 37 miles long, and less than 5 miles across at its widest point.

The island consists of two municipalities: Jose Santos Guardiola in the east (named for the former president of Honduras) and Roatán (also including the Cayos Cochinos) further south in the west. The most populous town of the island is Coxen Hole, capital of Roatán municipality, located in the southwest. Other important towns include French Harbour, West End, and Oak Ridge, the capital of Jose Santos Guardiola municipality.

The easternmost quarter of the island is separated by a convoluted channel through the mangroves that is 48 feet wide on average. This section is called Helene, or Santa Elena in Spanish. Satellite islands at the eastern end are Morat, Barbaretta, and Pigeon Cay. Further west between French Harbour and Coxen Hole is Barefoot Cay. Known as Burial Key until 2001, Barefoot Cay now is privately owned and houses a luxury resort popular with celebrities.

Located near the Mesoamerican Barrier Reef, the largest barrier reef in the Caribbean Sea (second largest worldwide after Australia's Great Barrier Reef), Roatán has become an important cruise ship and scuba diving destination in Honduras. Tourism is its most important economic sector, though fishing is also an important source of income for islanders.

Beautiful view and so fresh colors.

A very nice place to spend some holidays !

Although the harbour facilities look new, at least the rest of the island hasn't become over developed or commercialised in its drive to attract tourists.

Incredible view from the cruise ship - it seems so close to the shallow water of the reef. Wonderful outlook and so good to see the town free of high-rise development!

looks nice and inviting from that pov high above! you seem to have had a good time on the cruise ... ;-))

wonderful clarity in the water

What a lovely place. Looks so warm and inviting. The water is so clear!

Amazing mix of past and present here . . can feel the warmth.

Really amazing and beautiful view, 5 stories up I imagine from the water, gives this most
wonderful view. I wonder how shallow that water really is. Magnificent.

That is great way to see world. Fine landscape.

A wonderful scene...superb shot and angle!

That water looks so beautiful.