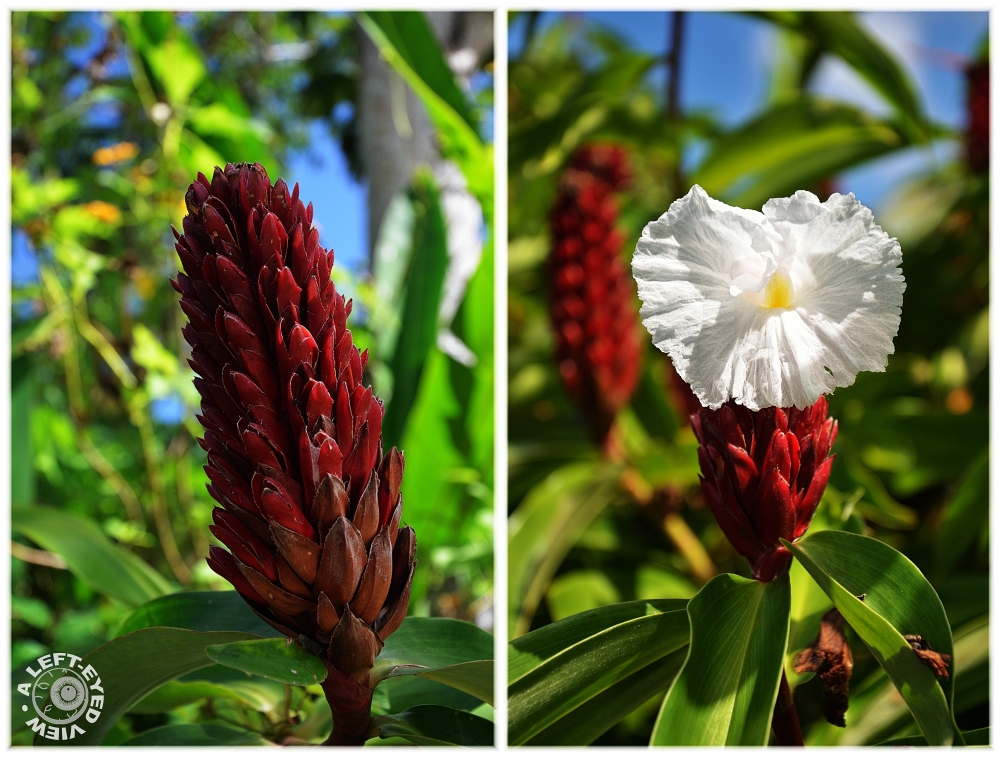 Posted by Steven (Chicagoland, United States) on 7 December 2011 in Plant & Nature and Portfolio.

Crepe ginger flower that I spotted on the Altun Ha grounds in Roatàn, Honduras.

The crepe ginger is a tall-growing and lush-looking, tropical shrub that is a common feature in local tropical-themed gardens. Growing up to a height of sixteen feet, the crepe ginger is often used as a background plant. Several plants with their large, dark and glossy leaves can be grown in a group to create a bold, dramatic effect. The most prominent feature of the crepe ginger is its white, trumpet-shaped flowers. The white flower-dark green foliage color contrast ensures the flowers stand out against the dark foliage. They avoid being obscured by other plants by blooming at the tip end of the ginger’s tall, sturdy stems.

The crepe-like appearance of its blooms is what earned this ginger its common name. The white flowers have a yellow patch in the center. The edge of the flower is undulated. Although they look fragile, feel the petals between your fingers and you will realize they are rather waxy in texture. These are the true flowers of this ginger, which emerge from a cone-shaped cluster of bracts. The bracts, which are technically modified leaves, are maroon in colour and remains attractive for about a month or so even after the true flowers fade.

Although the crepe ginger is better known as an ornamental plant, it has food and medicinal uses as well. The crepe ginger is to treat fever where the leaves are grounded into a paste and applied to the forehead to bring down a high fever. A decoction made from boiling parts of the plant is used to bathe a patient with fever. The crepe ginger rhizome had been used to treat colds, rheumatism and pneumonia and it is also eaten during times of famine as a source of carbohydrates but is presumably not very palatable due to its fibrous texture.

Very good colour and details, particularly on the white flower.

Truly beautiful, and the bloom is such a treat when unveiled.

The ginger is lovely in itself, but with the flower it is gorgeous!

Incredible colour and detail, either flowering or not it is a very beautiful plant.
Magnificent photos !~

Beautiful photos of this beautiful plant.

Very unusual and beautiful plant. I have need seen this before. Way cool.