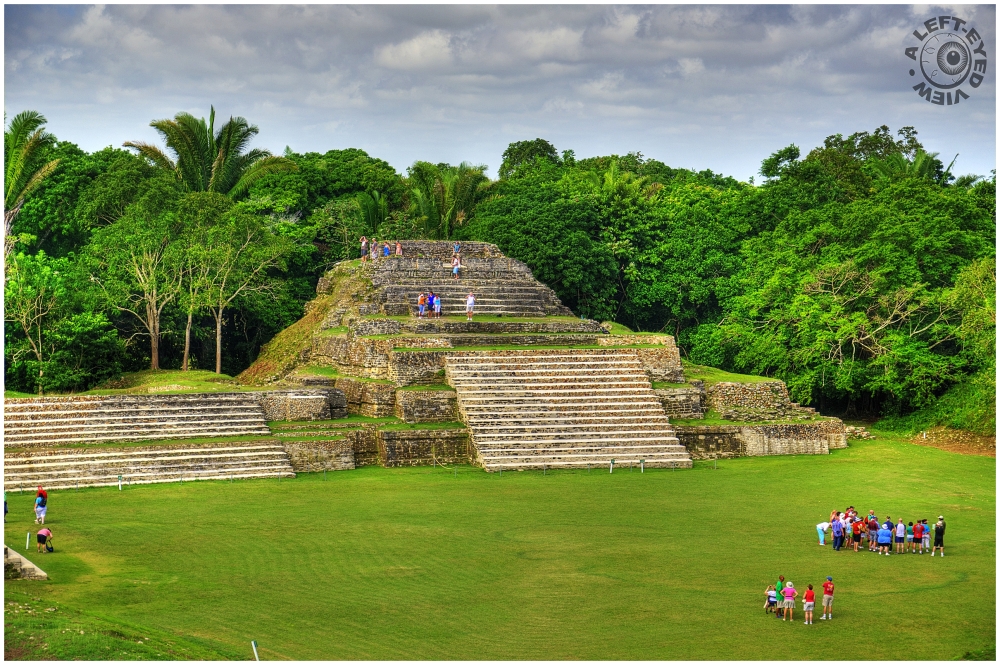 Posted by Steven (Chicagoland, United States) on 9 December 2011 in Landscape & Rural and Portfolio.

The Temple of the Green Tomb at Altun Ha, also known as Temple A-1, is the most imposing structure in Plaza A. It consists of a terraced platform marked by a broad stone staircase which extends about halfway up the structure to a chambered building. The temple was built during several construction periods in the 5th and 6th centuries A.D. Several minor modifications continuted to be made in succeeding centuries.

Found hidden deep inside this temple was a single tomb dating back to about 550 A.D. It is the earliest known tomb of several that have been unearthed at Altun Ha. The tomb was constructed in a manner that is unique among Mayan sites to those at Altun Ha. It is called the "Green Tomb" because it contained almost 300 jade objects. Other artifacts included shell necklaces and ornaments, pottery vessels, stingray spines (used in ritual bloodletting), and more.

It is believed that ritualistic bloodletting, but no human sacrifice, was carried out atop this temple.

This view was captured when I climbed to the top of the Temple of the Masonry Altars, seen in yesterday's post.

A fascinating subject and an excellent shot of the temple. Wouldn't it be great to travel back in time to take a glimpse of their daily life.

That is so cool. Mankind certainly has had strange ways to worship.

Another excellent shot.. thanks for the info :)

another stunning HDR shot.
the people in the shot give a great comparison of the size.

A fascinating read, blood letting, no human sacrifices here, but perhaps elsewhere? Then how did they go about capturing stingrays?
Great picture too.

A superb composition with fantastic colors .

A superbe capture with marvelous composition and fabulous shades of green. Thank you for intresting info.

Fantastic point of view - the tiny figures give a sense of scale for this imposing tomb. The rich emerald green is superb as well.

Another cracking good shot! I love the sense of scale and rich colors.

I love how the dense forest seems to encroach on the scene. Magnificent photo Steven.
These pyramids must have been lost to the vegetation for a long time.

Wonderful sense of proportion in this image and the colors are so vivid & gorgeous!

Amazing story and scene, Steven...I need to go here!! Thank you for this ;-)

perfectly composed again! i love the horizontal lines in these meso-american temples ...

i like the colorful garb the people are wearing

I love the green! The people really gives it perspective as to how big it is. An interesting history.

What a beautiful green place with some interesting history.

As soon as I saw this beautiful photo, I wondered how you got up so high. I thought it might be as you explained. The colors are so intense.