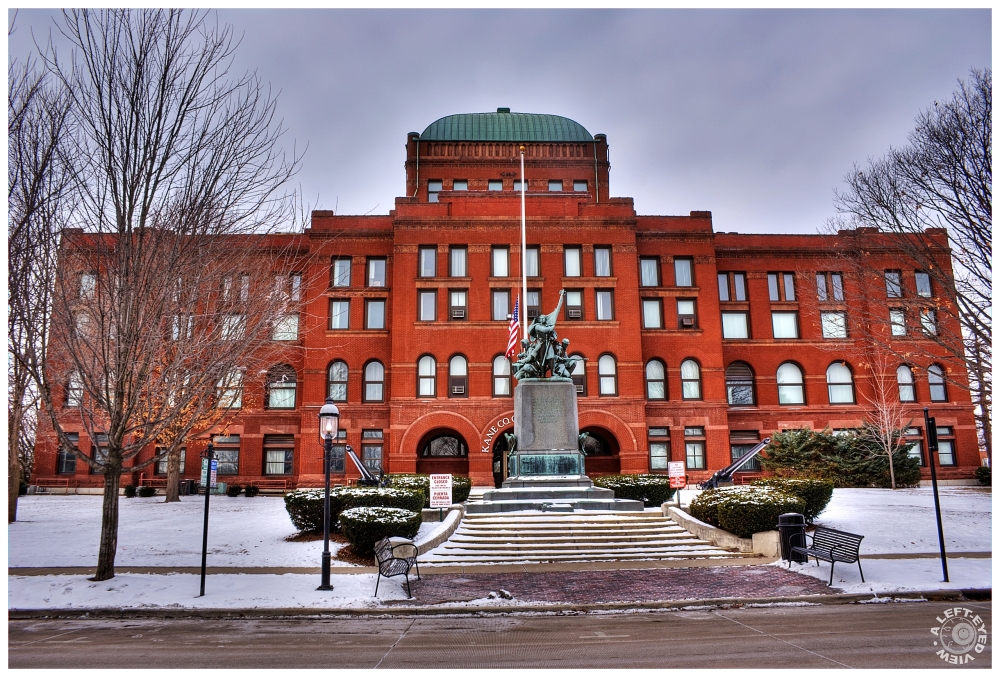 Posted by Steven (Chicagoland, United States) on 25 January 2012 in Architecture and Portfolio.

On January 16, 1836, a new County was fromed and named after Elias Kent Kane, a highly-respected attorney who helped draft the Illinois constitution and was the first Secretary of State. Kane was later elected to Congress and represented Illinois in the U.S. Senate.

On the night of March 13, 1890, Kane County lost one of its most prized buildings when the Courthouse burned. Fortunately, the records of the recorder, County Clerk, and the Circuit Clerk were locked in fireproof vaults and not damaged.

The original construction cost for the new courthouse was $195,000. The square dome rises high above the rotunda. Decorative ironwork railings encircle each floor and eleven murals, depicting various scenes from the County, are painted on the arches of the 4th floor.

That is a glorious building.

Good Ole' Kane County - I was born in Cook County! What a wonderful shot of this wonderful building.

Wow ...What a building !! Beautiful composition !

Great perspective on this unique architecture - lovely capture of its red stone facade as well.

Beautiful image and building. Thanks for the information. It is good to know that they had fireproof vaults and the end of the XIX century.

This is beautiful, Steven And I really like that "dome" at the top - just fantastic. SOme people hate winter but I DO like it for building shots becasue the colours stand out better and the trees are bare so we can get a MUCH better and full view...That's my take ;-)

A handsome building given your usual excellent framing and focus. I love the snow for this shot, too, which really enhances the hue of the brickwork.

Looks rather massive for a court built perhaps in the early 1900s, were they seeing into the future and getting a good idea about the size of the crime growth?

Courthouses were never small places, many rooms in one of that size I imagine.
Beautiful building.

That red brick is quite pretty. I hope we get to see inside.

This building has quite a history. I love learning about old buildings. I like the architecture. I bet it is beautiful inside. Great framing and compo!

Beautiful architecture shot. The color really stands out against the snow and cloudy sky.

Beautiful and colored Courthouse. Ours are more austere

I am very near Kane County, but have never seen this building before - I'd love to see the ironwork and murals inside. Great color and detail in this shot!