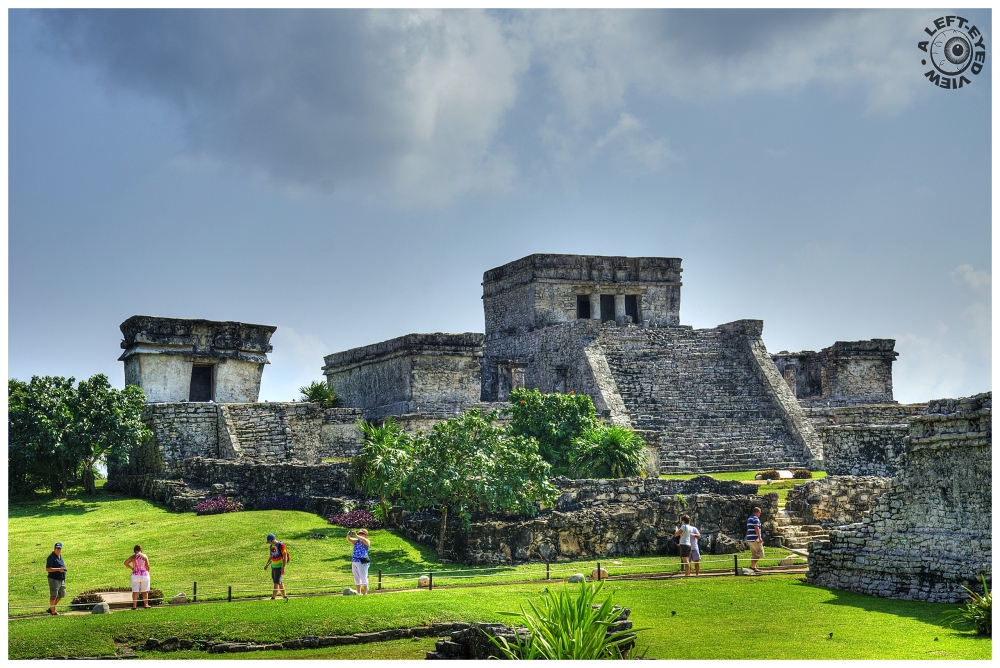 El Castillo and Temple of the Descending God

Posted by Steven (Chicagoland, United States) on 1 February 2012 in Landscape & Rural and Portfolio.

El Castillo (center) and Temple of the Descending God (left).

According to the readings on a plaque nearby, the Temple of the Descending God is "one of the most beautiful temples in Tulum. Neither the walls nor the door adjust to a straight vertical line. This is not a result of the passage of time, but rather the way it was originally designed. It was constructed upon another temple which was filled in, in order to serve as a base. In the recess above the door, there is a sculpture representing a personage descending from the heavens, with a headdress crowning his head and holding an object in his hands. The temple was decorated inside and out witha mural painting of several representations of gods, which, unfortunately, can no longer be admired."

Information on El Castillo will be shared on Friday.

I am envious - would love to visit El Castillo.

This is a fabulous place, it reminds Tikal somehow. Those temples with their big stairs ! Impressive. Great rendering and process on tone-mapping (as usual).

Fascinating glimpse into ancient history. Superb processing to bring out all the lines and textures of this amazing temple.

A wonderful capture and beautiful processing. Indeed a marvelous temple and must be a fabulous place to visit. beautifuly captured and presented.

This does look marvelous, sir! A great text as well, and as always! So intriguing these Temples and ruins...so much conjecture and so many theories and tales...This is a magnificent image to support your great words, sir! Beautiful!

Again the clarity and composition are perfect, the sun seems very special down on those
ancient monuments. The stonework is more than admirable to sit up for so many centuries
of wear and still come out so beautiful.

a wonderful place you visited and captured it in a so bright way!

Wow, fantastic place to see, thank you for letting us see

Beautiful detail and color. It is amazing how all those rocks were brought there and the temples were built. Great compo!

We visited Tulum several years ago in the dark ages of film. I remember it was very pretty and interesting, but in July also VERY HOT!

A stunning place. I love seeing such ruins. These seem well preserved.

Amazing structure..great shot! Thanks for sharing!

wonderful angle and light on this!