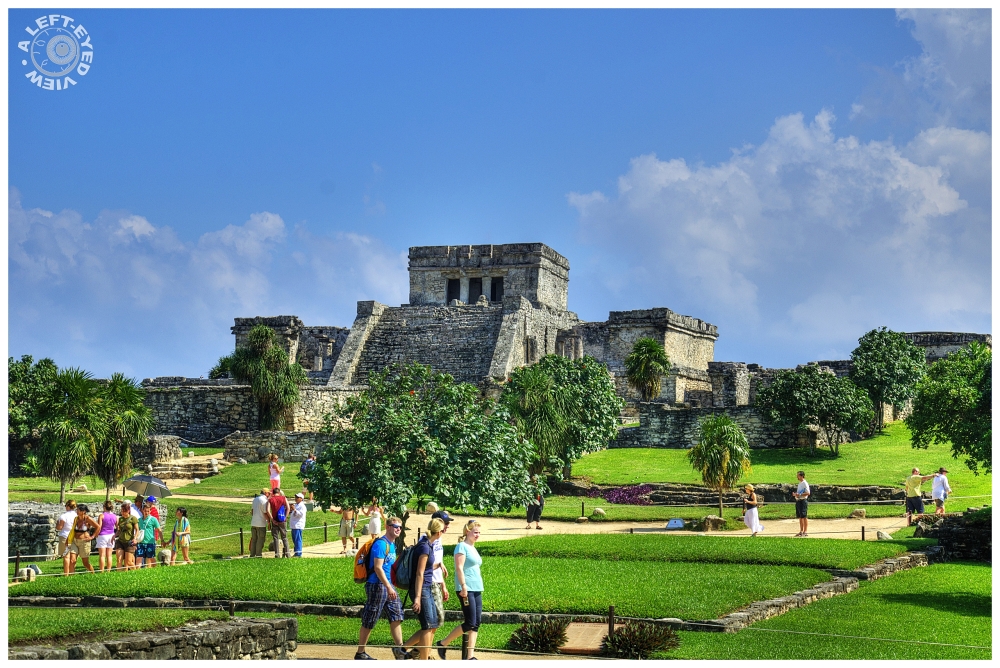 Posted by Steven (Chicagoland, United States) on 3 February 2012 in Landscape & Rural and Portfolio.

The most outstanding building of Tulum is the Castle, El Castillo, pictured here and perched on Tulum's highest cliff. This temple-topped pyramid also served as a watchtower and a lighthouse. Like many important structures in the Mayan world, the current building is the result of different stages of additional construction. It began as a palace-like base, the staircase added at a later date and eventually it was crowned by the temple on top. The doorway to the temple has columns in the shape of rattlesnakes, with the tails supporting the roof and their heads adjoining the floor. Due to the rapidly increasing number of tourists to Tulum, El Castillo is now roped-off, and not possible to climb.

Although it is named as such, it really isn't a castle at all. It was mainly used for sacrifice and ritual celebration, with the king making his royal proclamations (sometimes involving death sentences), from the very top of its staircase.

There are three known entrances to El Castillo, but rumor has it there was a fourth, secret entryway, known and used only by the king himself. Supposedly, it was located at the very bottom of the cliffs, far beneath the castle, and could be accessed only via one secret passage that led to a hidden beach grotto.

Despite being surrounded by other tourists you manage to make the scene vivid and bring it to life with your immaculate tone mapping.

Incredible story and superb processing to bring history to life!

Another wonderful angle and more impeccable processing to bring out the oomph!

The luminosity of the image is simply fantastic!

I think this is great Steven and I will say again, I actually like the inclusion of people here... for some reason it just helps with the perspective and sense of scale...and it show that there still are people out there who care about our history rather than tearinig everything down!gorgeous..

That is a good view of it.

what a great capture
well done

A beautiful building indeed. Such a gorgeous image.

Gorgeous composition, colors, and light. Looks to be a beautiful place to visit.

These nice shots are making we wish to return to Tulum again.

Even from this distance there is no mistaking its grandeur, and oh, those greens are so pristine,
possibly the way it was back in its heyday, and yet the barriers hopefully hadn't been invented yet.