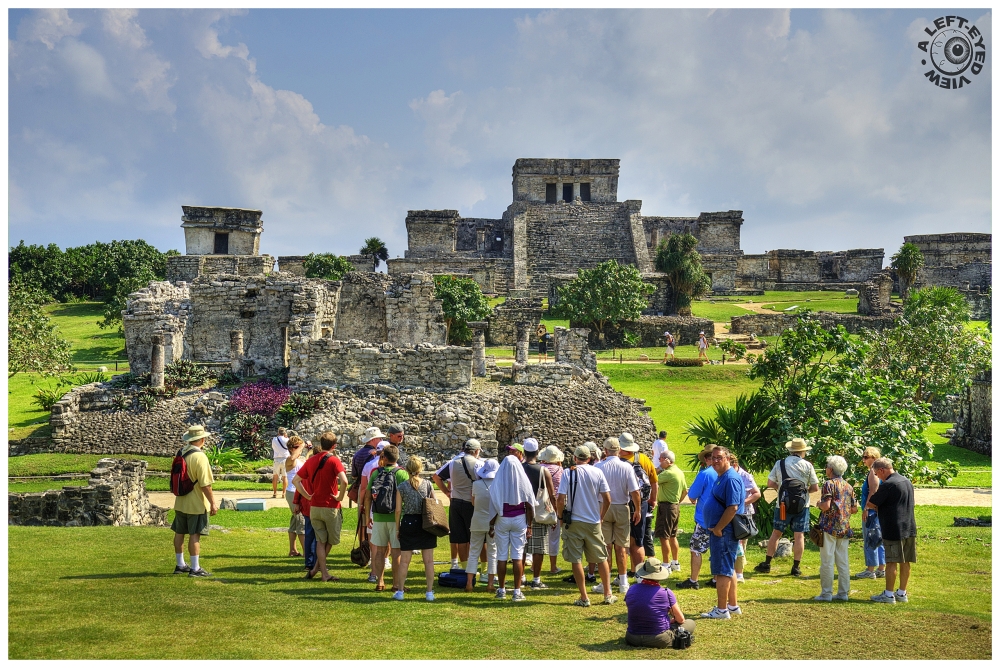 El Castillo and Temple of the Descending God

Posted by Steven (Chicagoland, United States) on 9 February 2012 in Landscape & Rural and Portfolio.

El Castillo (center) and Temple of the Descending God (left).

According to the readings on a plaque nearby, the Temple of the Descending God is "one of the most beautiful temples in Tulum. Neither the walls nor the door adjust to a straight vertical line. This is not a result of the passage of time, but rather the way it was originally designed. It was constructed upon another temple which was filled in, in order to serve as a base. In the recess above the door, there is a sculpture representing a personage descending from the heavens, with a headdress crowning his head and holding an object in his hands. The temple was decorated inside and out witha mural painting of several representations of gods, which, unfortunately, can no longer be admired."

That is another good angle.

a typical tourist shot but the CLARITY is OUTSTANDING**

Must have been fascinating to walk around here, thanks for sharing this series of pictures Steve.

The Mayan civilisation is so fascinating... Must be fantastic to be there ! A very beautiful capture of this unique place ! Have a lovely day :)

Magnificent composition and it is interesting how the ruins of the temple still tower over the crowd of modern 'worshippers'.

Very beautiful - I love that splash of purple amongst these ruins. Great shot!

It is a pleasure to look to this image. Wonderful colors and light.

Incredible buildings! This series of photos is wonderful.

a really fascintaing photo from a fascinating place!

This is a magnificent view, Steven...showing us a great deal of the area! The group is a big one :-)

What a nice vicarious vacation we are taking through this series of yours! Fine work.

A very beautiful shot, amazing to see the tourists all obediently lined up.
Somehow, I like to take them and replace them with the people who may
have been there, at least in my mind, the grandeur, even here with the
tourists - it is impossible to diminish the glory of the location, you have left
that for us to ponder in this magnificent photo !!~

This makes me remember how hot we were as we stood an listened to our guide. He told us more than I wanted to know, and I just wanted to walk around and shoot photos.

@B. Thomas: I felt exactly the same way! It was also very hot in November and it was a relief to approach the cliffs overlooking the Caribbean Sea (as will be seen tomorrow) and feel the breezes.

"Neither the walls nor the door adjust to a straight vertical line. This is not a result of the passage of time, but rather the way it was originally designed." I should make a plaquette like this for my flat...

@daniela scharnowski: That was too funny!