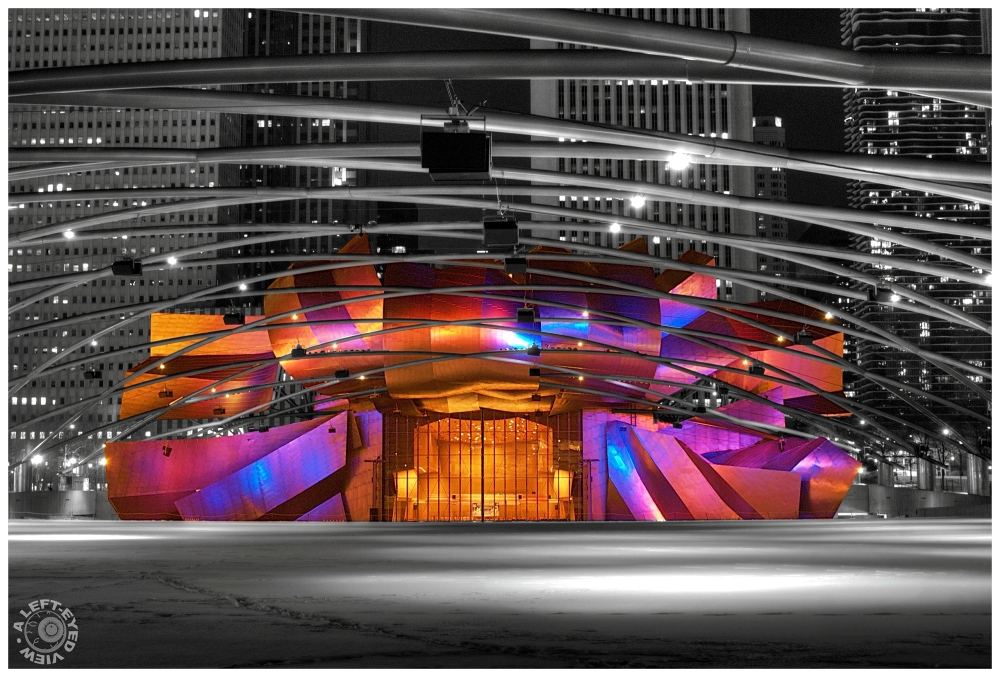 Posted by Steven (Chicagoland, United States) on 20 February 2012 in Cityscape & Urban and Portfolio.

What's Old Is New Again #1.....Here is a re-processing of the image posted on March 5, 2010. After I have had clients interested in this photo for purchase, I decided to apply the selective coloring so that the curved poles above the pavilion are not "colored over" like previously posted. I also have Curly to thank for prodding me to redo this selective coloring in greater detail.

View of the Pritzker Pavilion across its great lawn that is covered in a blanket of white snow. The Pritzker Pavilion is a bandshell in Millennium Park in Chicago. The pavilion was named after Jay Pritzker of the Pritzker family, known for owning Hyatt Hotels. The building was designed by architect Frank Gehry, who accepted the design commission in April 1999; the pavilion was constructed between June 1999 and July 2004, opening officially on July 16, 2004.

Pritzker Pavilion serves as the centerpiece for Millennium Park and is the new home of the Grant Park Symphony Orchestra and Chorus and the Grant Park Music Festival, the nation's only remaining free outdoor classical music series. It also hosts a wide range of music series and annual performing arts events.

A little selective coloring took place here to show what the true colors of the pavilion look like at night without the harsh night lights of the big city.

You Know Me from Dubai, United Arab Emirates

Oh yes!
A richer offering altogether, you have also got a greater depth of both colour and blacks, the contrasts are really compelling.
This is top drawer!

Amazing vista, and well done for the selective desat.

Beautiful depths achieved by the colour separation which is top notch, love the depth
also in this somewhat striking futuristic arena !~

Brilliant piece of work - a most compelling image!

Successful! Much nicer contrasts in this one.

well Steven, I compared the two shots and I have to congratulate you this second version - it's perfect demonstration of selective coloring.
so brilliant work!!!

I also prefer this one, the treatment with the colours is really good.

A skillful and beautiful realization...it was worth the second pass. Terrific.

Your work has paid off in a very beautiful image with superb use of selective coloring. A big "cheers" to you (and Curly) for this!

Fantastic! This is a gorgeous image. The selective coloring is beautiful!

this is really nice, Steven! The selective color editing just draws you into the image and doesn't want to let you go!

Much better compared to the previous one you posted, and a truly stunning image. Not surprised to hear of clients interested in it. Excellent work!