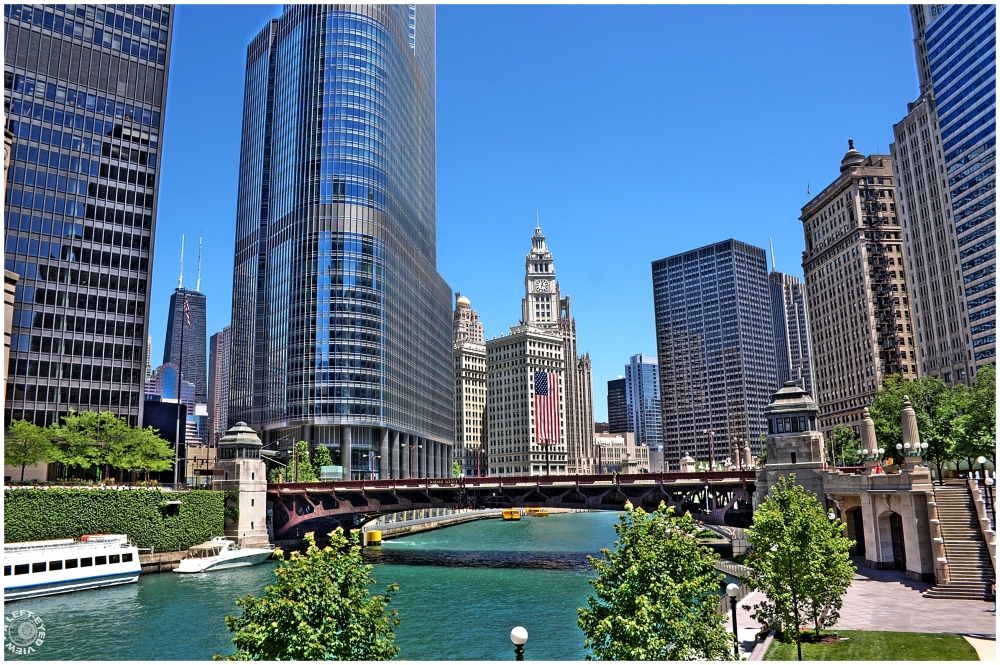 Posted by Steven (Chicagoland, United States) on 22 February 2012 in Cityscape & Urban and Portfolio.

What's Old Is New Again #3.....Pictured above is a re-post of a shot that I captured back in 2010. Looking back at some of the photos that I processed in HDR (high dynamic range), I could see how "overprovessed" they were; to a point that it is embarrassing to have posted. So I present to you this image more "tastefully" processed.

The American flag captured on the Wrigley Building for the Fourth of July holiday.

This is really beautiful - Excellent work on the re-do. Oh, to feel that kind of sunshine again... And I love Chicago street names!

This certainly is a great improvement.

The light is very natural and the colours and detail are stunning for this quintessential big city view.

Superb cityscape - Thanks for yesterday's comments

Yes, I'm amazed at the improvement, the major part being the saturation and the ability to now lose the halo effect. As I said yesterday you now have over a year's worth of additional experience, and it shows.

A beautiful city scape and marvelous light and colours. Beautifuly captured and presented.

a pleasure to see all these details! an extraordinary compo and I specially like this bright atmosphere again! superb!

Always a great composition and excellent opportunity to revisit the processing. This version captures the natural light beautifully.

I see that it is better and I remember the original, but I hardly think embarrassing, but I
do appreciate your perfection, it is always nice to see a photo again that is over the top
as a lot of your photos are !~

Magnificent view of the Chicago River. Superb colors. You managed to get the John Hancock in the frame.

I quite agree with MissT, Steven! A REALLY nice job on your rework here...but I am certainly not surprised. Your efforts and results are always beyond admirable...they are completely deserving of praise and you should be proud...I love this look. How warm and sunny, too :-)

very impressive perspective and view ... (but i have to add that i did not find your previous HDR treatment overdone at all!)

Great capture of this Cityscape. Bravo!

and you succeeded - this is a very nice HDR. As a rule, I HATE HDRs.......I think I'm allergic to them, in fact. But this one - it has that right balance that makes you ASK "is that HDR or not?". Bravo!

Is the water really that color? Beautiful cityscape.

Oh, so much better, Steven - this is truly a beautiful image that wasn't at all enhanced by the overprocessed HDR look. I'm so happy to see you using HDR processing in a much more subtle manner. Well done!

I like the height buildings with the river in the center. Looks really nice there. I have never been there.