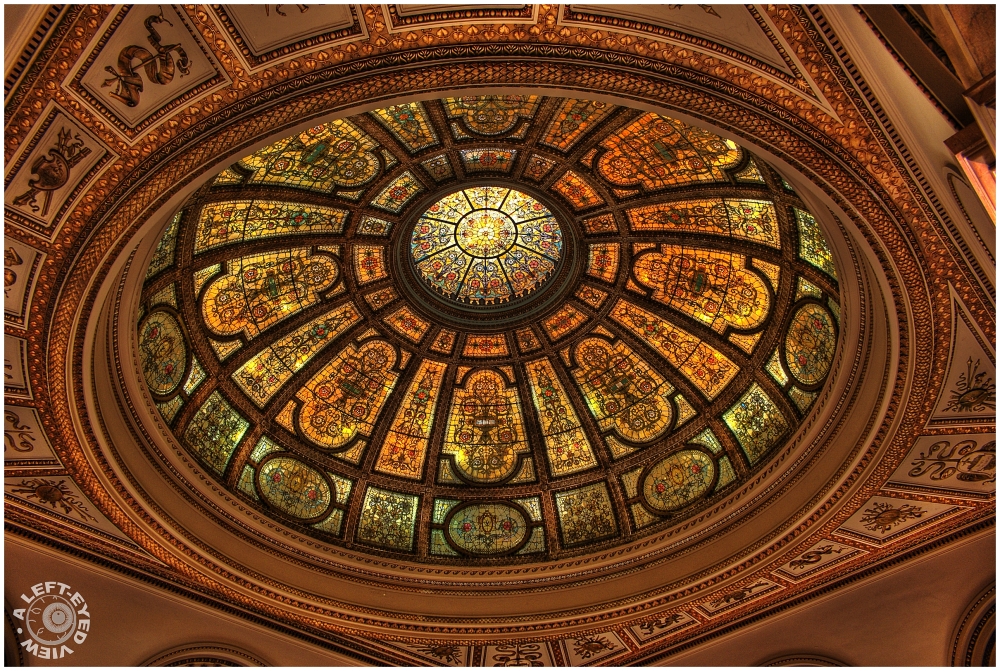 Posted by Steven (Chicagoland, United States) on 24 February 2012 in Art & Design and Portfolio.

What's old is new again #5......Pictured above is a repost of a shot that I captured in 2009 of the stained glass dome just outside the Grand Army of the Republic Memorial Hall. This HDR processing of three images turned out to be so much more detailed and not overly processed like the last time. I also noticed "smudges" in the previous post of this photo which I didn't understand and have since been removed.

The Chicago Cultural Center, originally the main branch of the Chicago Public Library (1893), which was built on land donated by the Grand Army of the Republic, maintains a memorial hall to the Grand Army inside the building.

The Grand Army of the Republic was a fraternal organization composed of veterans of the Union Army who had served in the American Civil War. The GAR was among the first organized interest groups in American politics. It was succeeded by the Sons of Union Veterans of the Civil War (SUVCW).

The rotunda just outside the memorial hall features 30-foot walls of Knoxville pink marble, mosaic floor, and a fine, colorful stained-glass dome in an intricate Renaissance floral pattern by the firm of Healy and Millet.

Interesting to reprocess with the benefit of what we all learn as we go along . . there have been - and still are - some Hideous-DR workings out there but this shows the true potential.

nice shot
have a lovely day

Excellent details and tones ! The details are fantastic ! Have a lovely day :)

A very beautiful glass dome !!! The colours and detail is absoloutely fabulous. Beautifuly captured and presented.

Very nice reprocessing. It's really amazing how after a short period of time, the skills that you develop allow you to reinterpret an old photo make much more special.

wow, look at this details! amazing!

Extraordinary detail is this version. Interesting example of how archival material can be further enhanced - especially for superb architecture such as this.

So much more detail and light contrast, it would be difficult to better these results.

so intricate - you could stare at this thing all day and not see it all! Amazing!

amazing details in this so good shot .

Brighter and richer in detail this time around ; your updated treatment series is fantastic.

This is spectacular! Superb image!

Very beautiful details and embellishments, beautiful warm colors too! Thank you for your thoughtful words yesterday on my post.

Amazing. Excellent details and tones. Beautiful dome and a fantastic shot. Love it. :)

This image looks more crisp and clear with more detail than the one previously. This dome is just gorgeous. I would love to see it in person someday.

Well, yes, this production is a little more refined....I like it and I think I could spend hours studying all the extraordinary details of this dome !!

I agree about the processing, just the right amount! well done!

Beautifully done - the stronger glow of light, especially in the center, really makes this version sing!

That is amazing glass work.

A delightful version of this wonderful stained glass. A masterpiece.

Wonderful version and so beautiful.

yo yo yo!!! :) hello mate!! how have things been? so glad to see your comment tonight! i am not really here - but i still post just to have an online storage or work... eventhough i have 4 of these types of sights LOL. are you on google plus? that is where i am these days... you should check it out...! and let me know if you join!!! :D

A fantastic dome indeed... what a work here on stain and glasses. Your process reveals and enhances everything Steven !

stunning image with a wealth of interesting detail! gorgeous perspective and angle!

Impressive colours and mainly light in this renewed version.

Wow! I am dropping my jaw!