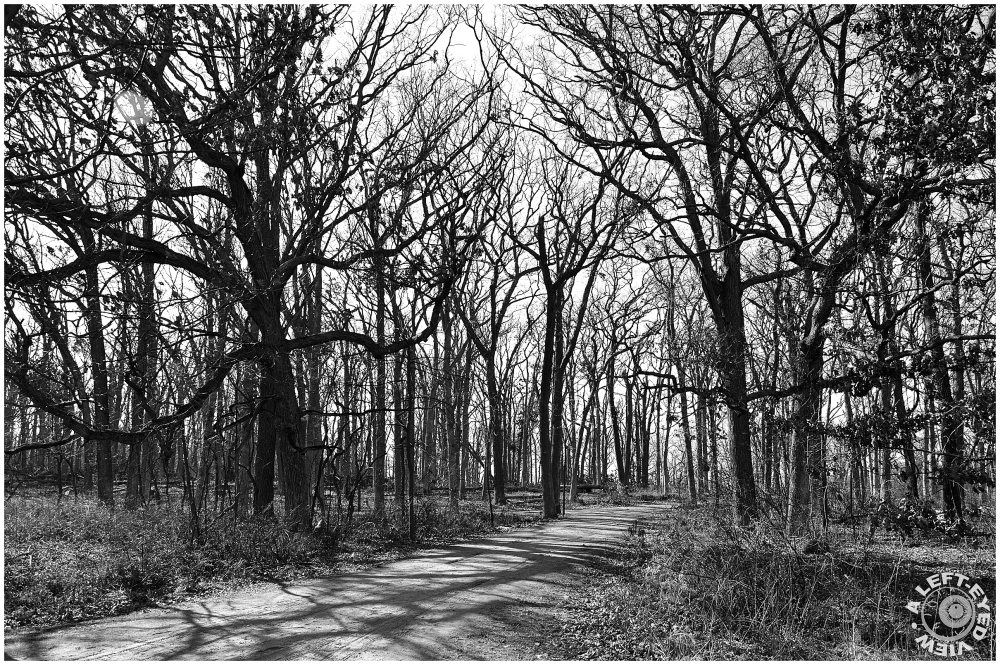 Posted by Steven (Chicagoland, United States) on 1 March 2012 in Landscape & Rural and Portfolio.

A grove of barren oak trees spotted in the Lyons Woods Forest Preserve in Waukegan, Illinois.

Lyons Woods is diverse, supporting prairie, savanna, woodland and fen. In the prairie, you’ll find such plants as dropseed, big bluestem and goldenrod. The woods support these large stands of white, bur and black oaks.

Five of the state's endangered species take refuge here; one is so rare its existence in the nation is threatened. Ecologists and volunteers give special attention to these species, but also work hard to protect and restore the preserve's many habitats. Over 1,000 native trees and shrubs have been planted here. Several techniques are used to keep non-native species at bay, such as controlled burning and selective clearing.

Nice b+w processing. It works with those stark trees.

Stark almost graphic pure black and white - it works for me!

Very nice b&w, I like the calm atmosphre and the diagonals of the path... Well done ! Have a nice day :)

what a cold atmosphere
well done indeed
Have a lovely day

Very beautiful with all the branches and the shadows on the path !

Wonderful depth to this landscape with the trees so bare. Must be a dramatically different view once the leaves and canopy return.

Excellent, I love the play of light and shadows upon the road. Beautiful work, Steven!

A beautiful shot of these naked trees. The B&W is especially nice.

The contrast is wonderful. Beautiful scene.

The shadows make nice patterns on the path. Nice B&W.

I like how we can see deep into the forest, a great capture without the foliage of the trees, a wonderful scene and view.

Great detail, light and shadows on this road, beautiful tones in your photo today !~

Oh Yah - that's what I like to see...I LOVE trees when you can see their branches....cool shot Steven

Great b&w. I like the shadows and the path. Makes you want to explore beyond!

Amazing B/W image. I like the light and shadows play on the path. The trees look great !!!

Oak trees are always beautiful, no matter the season. I like the light and shadow here -