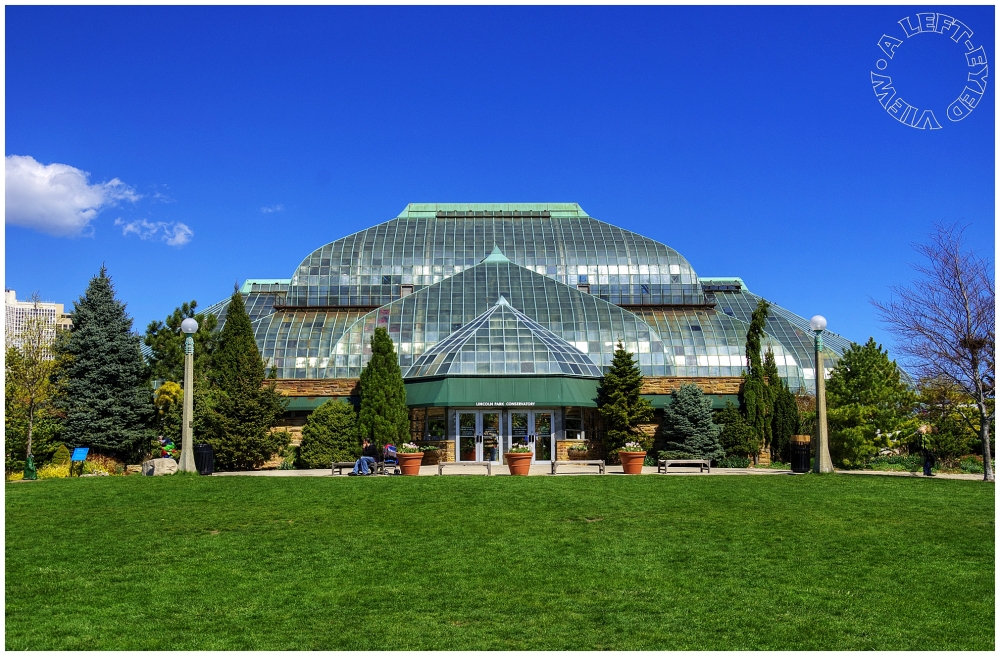 Posted by Steven (Chicagoland, United States) on 22 May 2012 in Architecture and Portfolio.

The conservatory was built in stages from 1890-1895. It consists of a vestibule, four display halls and fifteen propagating and growing houses. The vestibule and Palm House were built and opened to the public in 1892 and contain giant palms and rubber trees, including a 50-foot fiddle-leaf rubber tree planted in 1891. In the Palm House, one can also find Garden Figure, a sculpture by Frederick Hibbard. The Fern Room or Fernery, approximately five and a half feet below grade, was opened in 1895. It contains plants of the forest floor, primarily a vast collection of ferns. The Tropical Room was originally called the stove house. Opened in 1895, it contained an assortment of tropical plants suspended from bark-covered walls. It is now called the Orchid Room and has a collection of approximately 25,000 natural species. The Display House is used for seasonal flower exhibits.

i like your processing style, with all these fabolous details and "strong" colours!

what an impressive structure, both outside and inside. one can detect surprising plants and flowers there, i'm sure!

I want one of these in South Shields, do they still have the original designs hanging around in an old cupboard?

Wonderful roof lines with the shining glass sections - the range of green hues is most refreshing as well.

Excellent - such incredible colors you've captured here, both in the surrounding landscape and the architecture. Superb work, Steven!

Very beautiful building... The colors are so vibrant ! Have a lovely day :)

Sweet shot on a beautiful day. I really like the various panes and how they are reflecting light.

your blue sky is always mesmerizing for me ;)
Neat, crisp , wonderful image

so green love it

A very attractive conservatory ~ beautifully captured! I love the shapes and design of the roof ~ the light accents it very nicely!

I really love the roof, great shapes and colour

What a GRAND conservatory; I'd love to visit it ... thank you for sharing your images of it!

That's a beautiful construction, and an excellent shot of it.

Really spectacular place. I love how you've shared it.

A beautiful shot of this magnificent place.