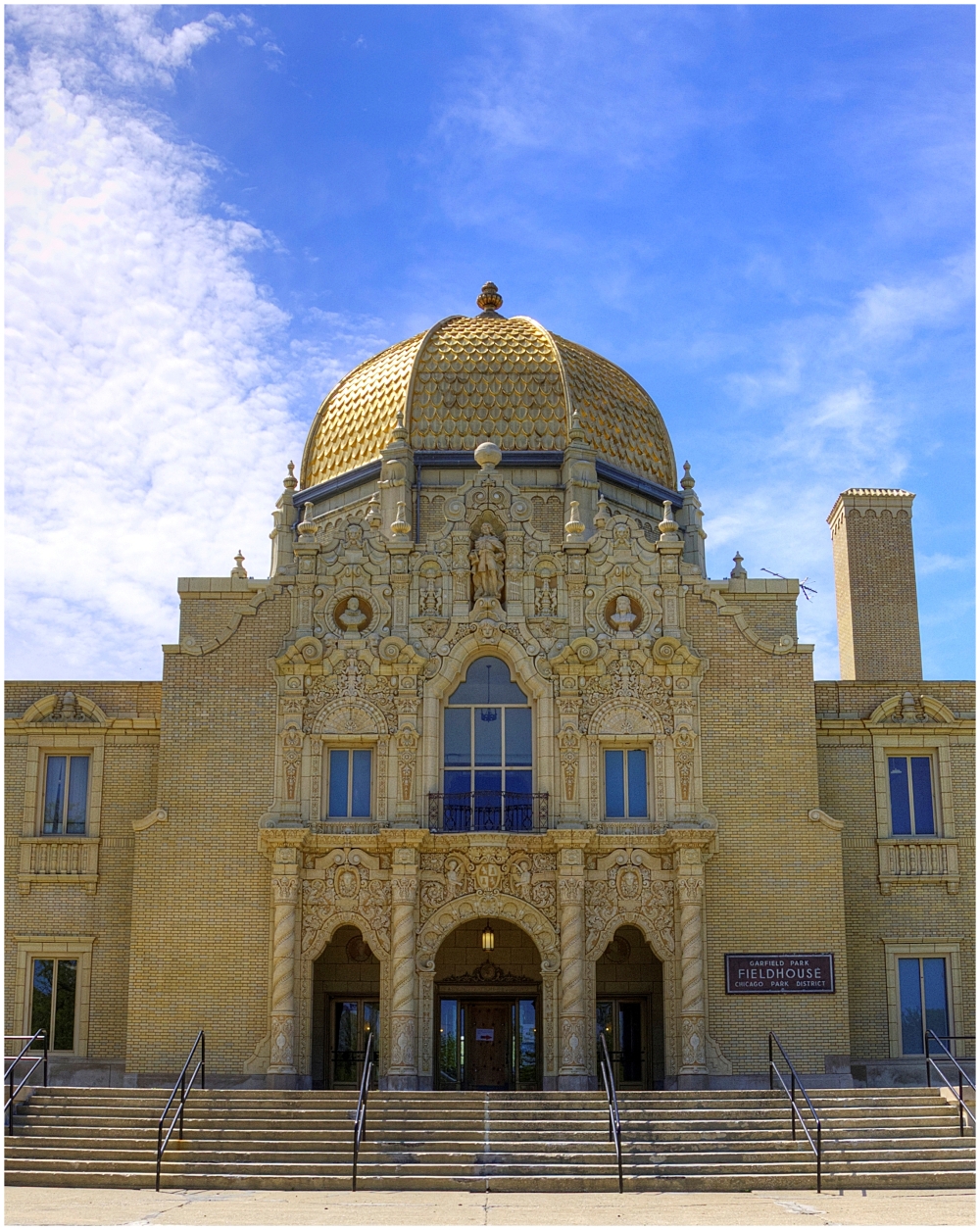 Posted by Steven (Chicagoland, United States) on 26 June 2012 in Architecture and Portfolio.

Originally the West Park Commission Administration Building, the Garfield Park Fieldhouse, known to thousands of Chicagoans as the “Gold Dome Building” for its distinctive gold-leaf dome towering over Garfield Park, is a dramatic visual landmark for the surrounding Garfield Park neighborhood.

The Garfield Park Fieldhouse is an architecturally impressive building in the Spanish Baroque Revival style, unusual in the context of Chicago’s architectural history as well as for the Chicago Park District. This visually flamboyant style uses decorative details drawn from historic Spanish Baroque and Spanish Colonial architecture. Characteristic of the style, the Garfield Park Fieldhouse has a richly decorated entrance pavilion with twisted columns, portrait busts and sculptures, and other ornamentation including scallop shells, scrolls, pinnacles, niches, and swirling, naturalistic plant forms. Inside, the Fieldhouse has an ornate two-story rotunda with a
colorful patterned terrazzo floor and marble-clad walls punctuated with sculptural panels.

Built in 1928 as the headquarters for the West Park Commission, the Garfield Park Fieldhouse represents a period in Chicago’s history when the City’s parks were managed by nearly two dozen separate park commissions before their consolidation as the Chicago Park District in 1934. The West Park Administration Building’s conversion to a fieldhouse after 1934 reflects the changing cultural attitudes towards the role of parks in Chicago in the twentieth century as park administrators created and renovated park landscapes and buildings to encourage active, rather than passive, recreational uses.

A gorgeous capture going to extreme.. may I say WOW !

The detail is fabulous, and I love the blue sky reflected in all the windows!

Love that reflection of the blue sky in the windows

I'm surprised to see such Spanish and Moorish influences so far north in the USA.

Fantastic ornate style - the light is sensational on the gold dome!

it´s always fantastic to see your captures with all these details! great, you´ve definitely an eye for such motives!

This is beautiful Steven. I would REALLy like to shoot this one :-) Fantastic!

A beautifully embellished building. The dome is pretty spectacular.

This is a beautful building. I love the detail. A wonderful frame!

That is certainly an ornate building.

A masterpiece of design, the photo seems to have texture as if one could feel the
precise "carving" of this jewel box lid, the detail is simply mesmerizing, and that
gorgeous golden colouring makes it seem you are in a desert, so enticing and so
beautiful, it appears to loom far above its height !~