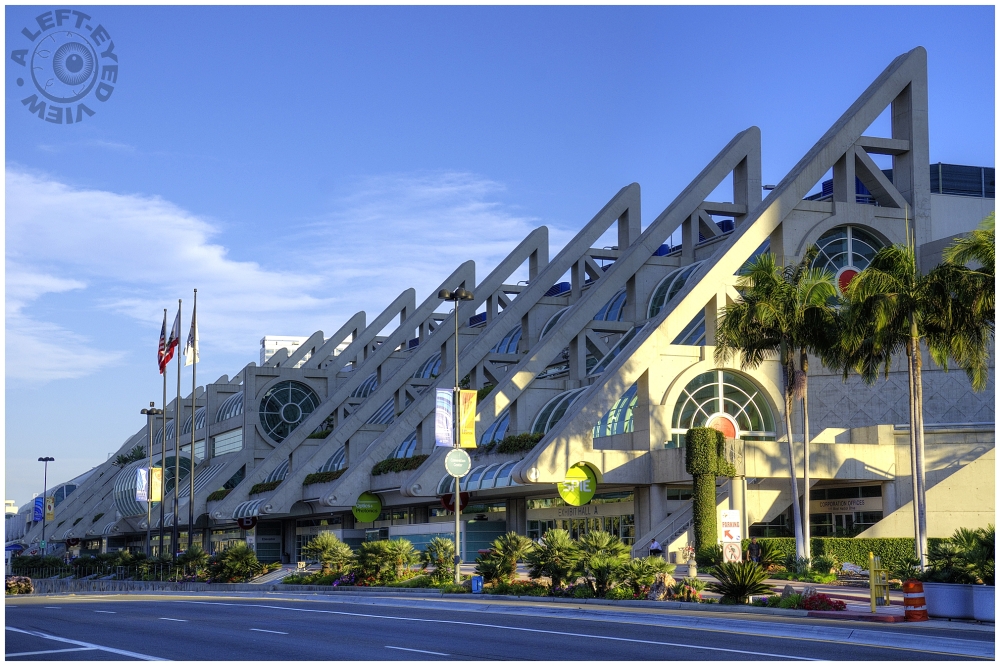 Posted by Steven (Chicagoland, United States) on 3 September 2012 in Architecture and Portfolio.

Finally made it back to Aminus3!

San Diego marked the starting point for our drive along the Pacific Coast Highway heading north to San Francisco. Little did I know how many pictures I would take along this journey over the course of eight days.

The convention center offers 615,701 square feet of exhibit space. It was designed by Canadian architect Arthur Erickson. Capacity for the facility is 125,000.

The center's most distinguishing feature is the Sails Pavilion, a 90,000-square-foot exhibit and special event area. The Sails Pavilion's roof consists of distinctive Teflon-coated fiberglass "sails" intended to reflect San Diego's maritime history, as well as to advertise the center's proximity to the San Diego shore. The Pavilion was originally built as an open-air facility under the roof. However, the center found it hard to convince potential users to book an open-air facility, so the Pavilion area was enclosed in glass, greatly expanding the usable area of the center.

Welcome back!
Cracking good shot and interesting to see some of the more modern looks that San Diego has to offer, I always imagined lots of Spanish influences there, but perhaps Erickson had other things in mind.

It good to see your wonderful captures here again. Welcome back Steven

Welcome back with this perspective-ly wonderful shot of the convention center.
I can't wait to see at least **some* of your eight days' worth of photos!

Beautiful, Steven and thanks for bringing this bit of fond memories to me, as we were 20+ year residents of this city. We were there when this puppy was constructed and like any great sailboat, she's a beaut aint she..Hope you had fun driving up PCH!

Wonderful perspective to show off the beautiful symmetry and graphic of this place.

Welcome back Steven ... Stunning image of this architecturally magnificent building !!! The perspective, light and colors are great ...

Fantastic shot of this convention center. The architecture is well displayed in your composition. Great light.

fine graphics. much of that route is gorgeous

Beautiful photo Steven, it was hard for me to comment on this as he was such a
special person, remembering his life, remembering as he sat on a sofa those years
ago and remember another person lounged on top of the sofa as he talked to
E. Taylor and she just sat there listening intently, he never bragged, so humble.
Such a special person, I would have loved to buy a home or furniture he designed,
his life was epic and he will be sadly missed. Too sad for me.

Otherwise I would have commented early this morning.

Welcome back! A beautiful image of this impressive building taken with a wonderful light and an excellent framing.

Carol from Leamington ON, Canada

Such fine architecture, you've captured it well and the sunlight brings out its beauty even more. A nice angle and dof taking us down the length of the building. So clear and detailed. Very nice! Welcome back!

It's a fine looking design, and as always an excellent photograph !

Welcome back! I missed you. What a great drive. I really like the architecture. Beautiful light!