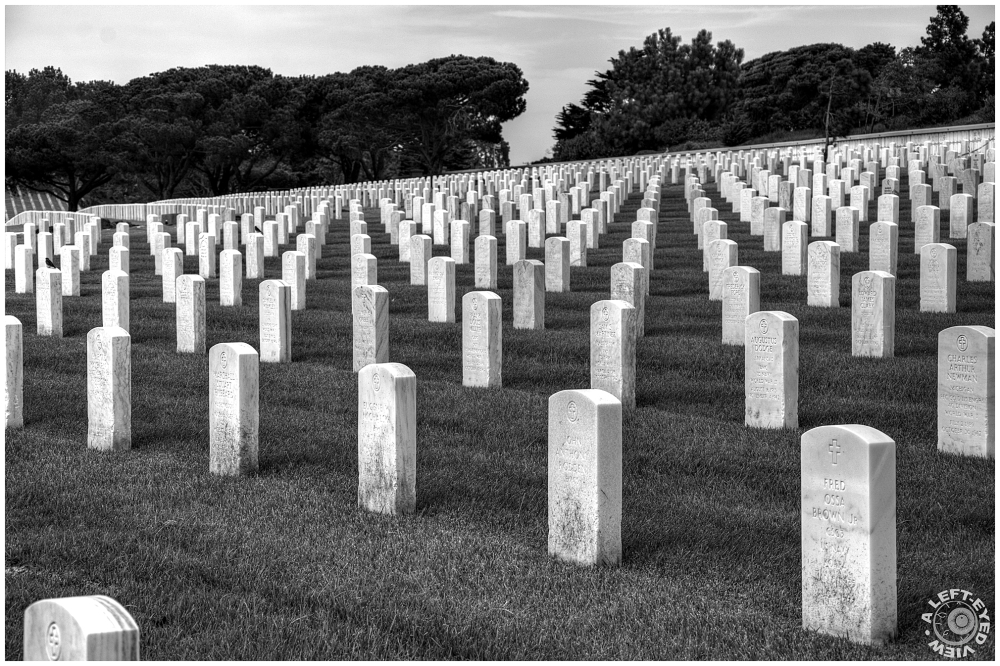 Posted by Steven (Chicagoland, United States) on 17 September 2012 in Landscape & Rural and Portfolio.

Fort Rosecrans National Cemetery is situated in the city of San Diego, California, on the Fort Rosecrans Military Reservation. The cemetery is located approximately 10 miles west of downtown San Diego, overlooking the bay and the city. Fort Rosecrans is named after William Starke Rosecrans, a Union general in the American Civil War.

Difficult to find words in a place like this . .

Powerful and compelling image - so strong in b&w

Perfect use of those lines, I love the uniformity of military cemeteries.

So simple yet so effective and powerful. Wonderful use of the lines here, Steven!

Great use of B&W. The image is very impacting!

Wonderful leading lines in this image, Steven, and a touching scene.

Fantastic symmetry of the head stones (even the field in the distant left); a beautiful place to remember these souls ~ great capture and post!

A nice tribute through your graphic composition Steven !

I have a few friends here - Thank you Steven!! A beautiful shot!!

a very stark and sobering image, steven, and a pity there are so many of these places ...

A very powerful and emotional image for me. My dad was buried at Arlington last Monday.

There is something so moving about national cemeteries. You have captured it in such a lovely graphic way.

fine graphics; appropriate to the scene

I can almost feel the quietness. A very touching shot.

Silent and shameful, such a waste.

Beautiful and powerful image. Love the tones in this too.

So many grave markers in a place like this. I was recently at the Santa Fe National Cemetery and was struck by all the lives lost defending our country. A beautiful image.