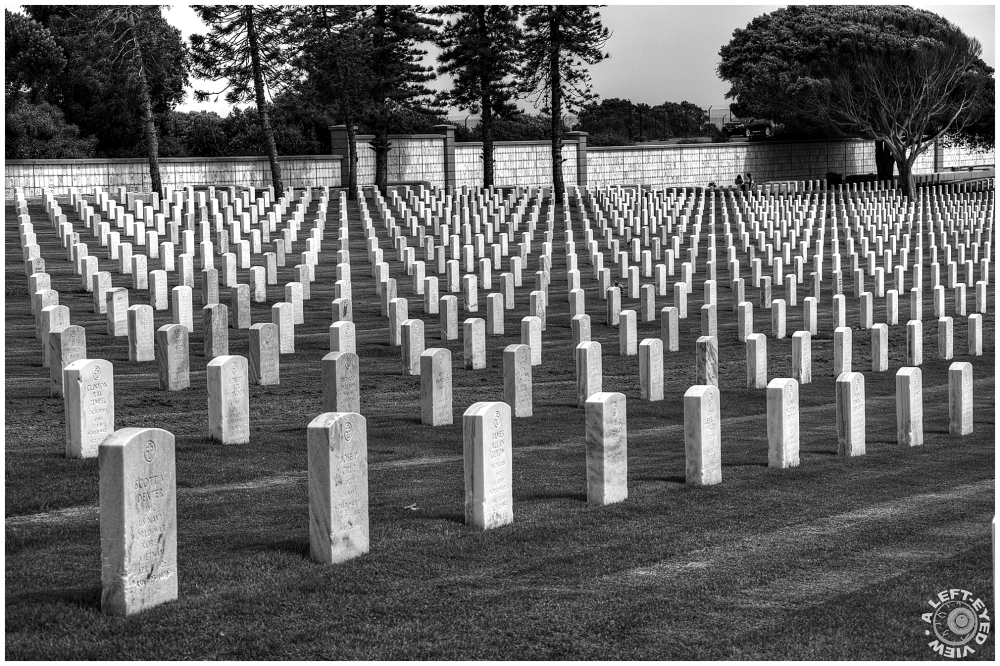 Posted by Steven (Chicagoland, United States) on 18 September 2012 in Landscape & Rural and Portfolio.

Chevron was the first thing I thought of when seeing the headstones from this point of view. Here we are at Fort Rosecrans National Cemetery again. After what some people commented about yesterday on how everything was so straight and aligned, I thought I would clarify that when we stopped by Rosecrans, the Department of Veterans Affairs was underway with a project that entailed the raising and realigning of headstones and grave markers, which is why everything looks so straight.

The unfortunate thing was that the more scenic areas that overlook the bay, San Diego and the very long rows of headstones that follow the rolling hills were currently undergoing the "transformation" and were obstructed by heavy machinery, backhoe equipment, or turf that was dug into.

This view is very intriguing Steven, I can play with my eyes finding every moment a new vision! At one moment I thought "everything at his place!" and, immediately after, "everyone at his place !?"...

Much better framimg than the previous

Extraordinary composition and many reasons for reflection

this geometrical regularity is awesome ... as if trying to put order into the chaos of death !!!

@franz: An interesting way of looking at this! Many thanks!

Yes, a beautiful and compelling pattern - wonderful framing and great sensitivity to the location.

Yes, chevrons indeed - cross your eyes and they really stand out. This is a beautiful shot, Steven, and it looks like they did a great job getting all of the headstones straigtened and aligned.

Six inverted chevrons times how many rows ... and an equal number of broken lives. Another moving image, Steven. These shots take me back to our visit to Arlington, VA.

Even before this effort took place, driving along the National Cemetery on the wy out to Cabrillo National Monument, I could not help but slow down, sto, look and meditate as I gazed upon the row after row, line aftetr line of headstones - and think of all the sacrifice. San Diego has always been a military town and these graves are as much of a part of this great city as the earth, bluffs, sky, and water. thank you for this!!

I think it is amazing how the rows are so perfectly lined up in every direction. Beautiful.

A stunning image. The stones present such a beautiful graphic.

Another beautiful view of the headstones ... great chevron pattern!

Superb monochrome with an excellent framing. Have a lovely afternoon Steven. Amicably Antoine.

Impressive alignment. And knowing what is underlying, the impact is made stronger. The B&W fits perfectly.

Fabulous monochrome shot of this impressive and perfect geometrical alignment !!!

I suppose the sense of order is to reflect the discipline within which their lives were lost . . not sure that relieves the pain of it all, though . .