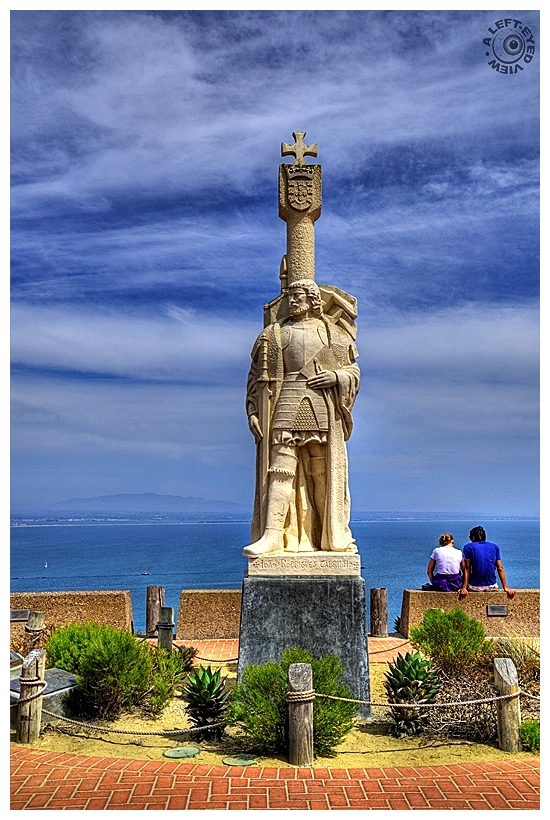 Posted by Steven (Chicagoland, United States) on 24 September 2012 in Landscape & Rural and Portfolio.

The Cabrillo National Monument is located at the southern tip of the Point Loma Peninsula in San Diego, California. It commemorates the landing of Juan Rodríguez Cabrillo at San Diego Bay on September 28, 1542. This event marked the first time that a European expedition had set foot on what later became the West Coast of the United States. On October 14, 1913, by presidential proclamation, Woodrow Wilson reserved 0.5 acres of Fort Rosecrans for "The Order of Panama ... to construct a heroic statue of Juan Rodriguez Cabrillo." By 1926 no statue had been placed and the Order of Panama was defunct, so Calvin Coolidge authorized the Native Sons of the Golden West to erect a suitable monument. The heroic statue of Cabrillo, looking out over the bay, was executed by sculptor Alvaro de Bree for the Portuguese Government in 1939, who then donated it to the United States. The limestone monument is 14 feet tall and weighs 14,000 pounds.

I like how the participants here are back-to-back . . looking in different directions, seeing a different Future.

A remarkable work of art, these sculptors were masters of their craft. Love the vibrant colours.

beautiful, with couple behind !

What a striking monument for the event that took place in 1542; that is a long, long time ago.

SUch clarity and color. I like the texture of the statue. Beautiful image.

This statue looks beautiful against the blue sky and the ocean! Gorgeous composition.

I don't know how I missed this one today when making my rounds, but it sure is a great shot filled with vibrant color and super clear. That is a beautiful monument !

I remember seeing this. Nice monument. BTW - did you see any gray whales swim by?

Wow, what a statue and a gorgeous shot, Steven. He looks like some type of superhero standing there and keeping wach.

You have captured a gorgeous view. I also like the blue blue background here so much. The statue stands out beautifully and those two human beings add the beauty of your scene.

I missed your beautiful shots Steven. Welcome back

A beautiful photo wtth the sculpture and wonderful sky.

That is a wonderful shot. All that blue sure makes the statue stand out.

Great contrast against this wonderful sky.