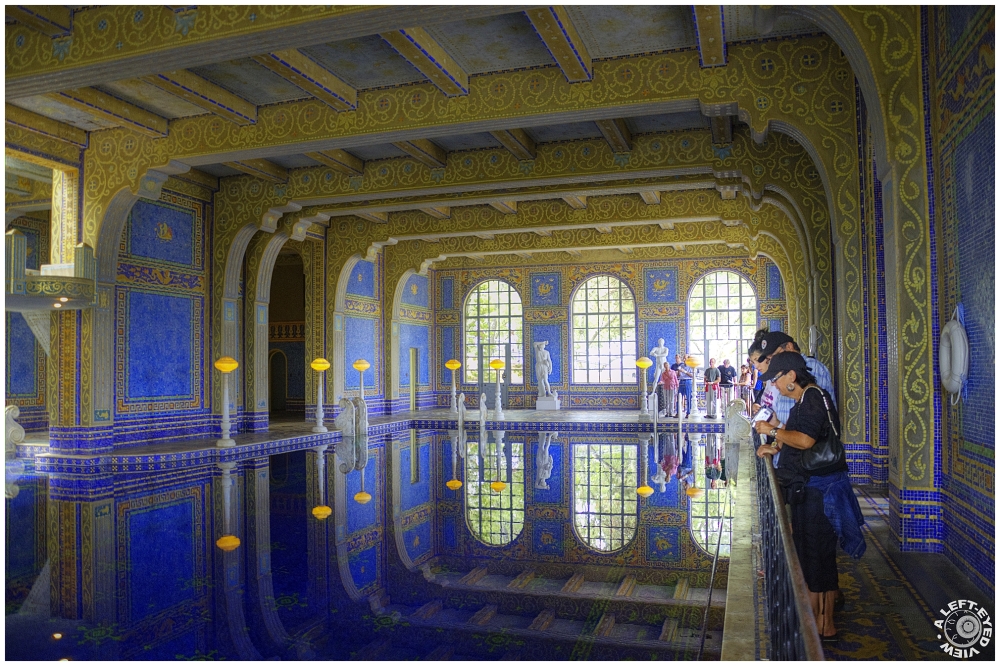 Posted by Steven (Chicagoland, United States) on 4 December 2012 in Art & Design and Portfolio.

The Roman Pool at Hearst castle is a tiled indoor pool decorated with eight statues of Roman gods, goddesses and heroes. The pool appears to be styled after an ancient Roman bath such as the Baths of Caracalla in Rome c. 211-17 CE. The mosaic tiled patterns were inspired by mosaics found in the 5th Century Mausoleum of Galla Placidia in Ravenna, Italy. They are also representative of traditional marine monster themes that can be found in ancient Roman baths. The statues are rough copies of ancient Greek and Roman statues. One such copy represents the “Apoxyomenos.” Statuary was used on a considerable scale in the Baths of Caracalla.

The pool and surrounding room, which were built from 1927-1934, can be compared to an ancient Roman bath. The pool, like the baths, is located indoors. Its water was heated as in a tepidarium. However, in Hearst’s complex there were no hot or cold baths as there were in the ancient complex. The Roman Pool complex was designed to contain an exercise room, sweat baths, a handball court and dressing rooms.

The Roman Pool is decorated from ceiling to floor with 1″ square mosaic tiles. These glass tiles, called smalti, are either colored (mainly blue or orange) or are clear with fused gold inside. The intense colors and shimmering gold of the tiles combine to create a breathtaking effect. The designs created by the tiles were developed by muralist Camille Solon. The inspiration for some of these designs came from the 5th Century Mausoleum of Galla Placidia.

Hearst was affected by the beauty of the mosaics in the mausoleum and incorporated similar styles into his Roman Pool. The walls of the mausoleum are marble but the vaulted arches are composed of blue and gold smalti. The roofs and dome are covered with mosaics of night blue, powdered with stars. The Roman Pool is similar to the mausoleum with its blue and gold color scheme and stylized star patterns. It differs because marble was only used in the statues, not on the walls, and there are no religious murals.

Decorating the Roman Pool are eight marble statues. These statues were carved starting in 1930 by Carlo Freter working in Pietrasanta, Italy. They are rough copies of ancient Greek and Roman statues. The statue of “Apoxyomenos” is found near the east side of the building. “Apoxyomenos,” also known as “The Scraper,” is a statue of an athlete scraping dirt and moisture off the underside of his right arm. The original bronze statue was created by the Greek sculptor Lysippos c. 320 B.C.E. Because Lysippos’ work does not survive, Freter worked from an ancient Roman copy of “The Scraper” found in the Vatican museum in Rome. Freter faithfully copied the Roman copy but also completes the statue with the addition of the missing strigil (scraper) and the missing fingers of the outstretched hand.

Stunningly unreal . . or is it extra-real, I wonder ?!

A beautiful photo, as good or better than I have seen of this room and it shows
the scale particularly well, Steven !~

Quite an incredible HDR with all of that colour and detail, the reflections are superb.

Your treatment brought out every detail ... wonderful work!

You rocked that shot, big time. I love it.

WOW those tiles are absolutely beautiful!

This is just gorgeous. The vivid color and reflections are amazing.

Wow, beautiful pool and decorated tiles... the reflection is outstanding!

Oh yes, I remember this wonderful pool and tile work. A superb photo.

A spectacular photo Steven, such luxuries back then.... the beauty of the tiles and the colors are fantastic! I love the angle of this and the reflections are so cool! Excellent!!

Wow, that is stunning

Remarkable picture and perfect, deep reflection of surrounding walls. If we didn't have any people on the picture I wouldn't recognize reflection for physical walls and sculptures.

Wow! This is absolutely beautiful! The colors and the reflections are gorgeous.

I remember seeing this and I've got to say it's the most beautiful swimming pool I've ever seen. The outdoor pool was not to shabby either. ;-)

wow.. incredible work on the ceiling and the walls.. Double pleasure with the reflections :)

Such a beautiful and classy place. Wow.

a stunning (if slightly crazy) place and a cracking shot !!!