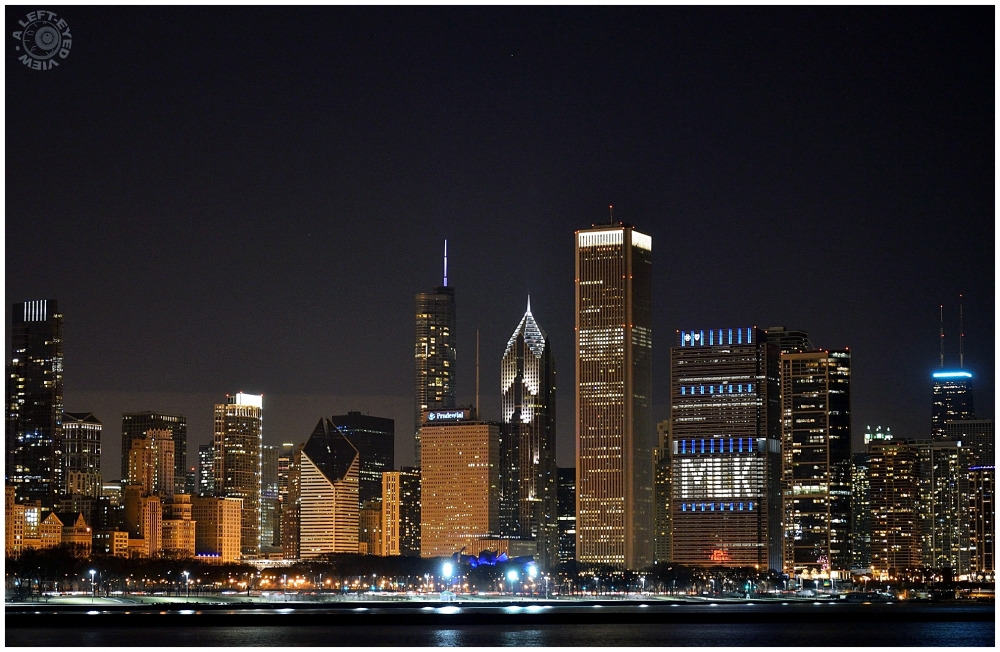 Posted by Steven (Chicagoland, United States) on 21 January 2013 in Cityscape & Urban and Portfolio.

A nighttime capture of the Chicago skyline as taken from the Adler Planetarium. The Blue Cross/Blue Shield of Illinois Building on the right is lit up in honor of Dr. Martin L. King, Jr. As you can see, various offices of the building are all aglow on multiple levels to spell out "MLK" in his honor.

Chicago still is without snow with less than one inch (1") having fallen. And Lake Michigan remains unfrozen due to the very unseasonable warm temperatures we have been experiencing. Last summer's record high temperatures, along with Lake Michigan still remaining unfrozen, is one of two factors that has led Lake Michigan to its lowest water level. In 1987, Lake Michigan was at one of its highest levels.

The Smurfit-Stone Building has the diamond-shaped roof. To the right of that is the Prudential Building with the Trump Tower behind it. The Aon Building is the tall, square white building, just to the left of the Blue Cross/Blue Shield of Illinois Building. The John Hancock Building can be seen on the far right.

Stunning skyline, Steven - has to be one of the world's best concentrations of architecture. Fine tribute to MLK as well.

Fabulous night time shot Steve, so crisp and sharp!
We still don't have much snow here either, the rest of the north east is getting a heavy battering from a 24 hour storm and lies under a thick blanket of white stuff, but here at the coast it's just sleet and rain.

A excellent capture with fantastic light and colours ! It is indeed amazing that Chicago has not a lot of snow for this time of the year. The weather all over the world is not the same anymore.

That is really cool, Steven - what a fabulous shot for today!

@maximage: I am happy with it. I just wish I had more time to experiment with all of its features. :-)

HI Steven - Yes this is a wonderful display and a fantastic exposure here.Just a beautiful and masterful shot. Very unsettling news about the lake level and snow scarcity..Some may not care much for snow, but the lack of it is even more frightening! Thank you for the fine image as well as a very thought-provoking text. Finally, I respectfully join you in saluting Dr King!

I like chicago so much
this city at night is very live.
so great

Absolutely beautiful! A gorgeous skyline. What a wonderful tribute.

Stunning night shot of this impressive city skyline !!! light and colors are spectacular ...

very crisp, sharp and well exposed night shot of the city! the skyline looks quite superb with variety of buildings! great work!

an impressive array of fascinating skyscrapers, as befits their birthplace!
a happy belated MLK day ... haven't he and his memory come a long way, finally and fortunately ?!?