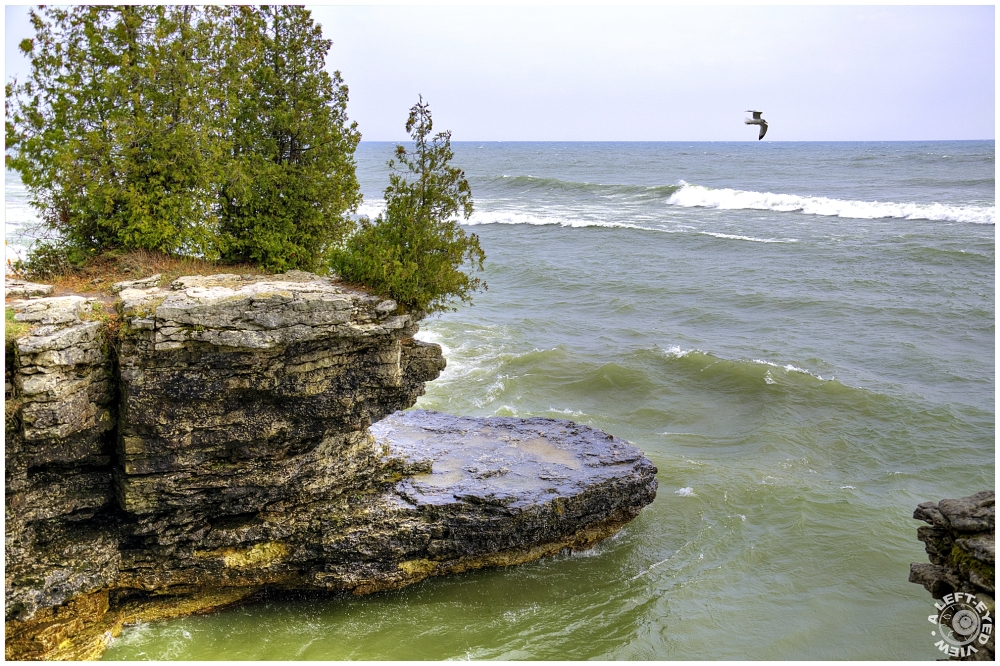 Posted by Steven (Chicagoland, United States) on 25 April 2013 in Landscape & Rural and Portfolio.

The rocks exposed at Cave Point are from the Silurian Period, a geologic time period which lasted from approximately 435 million years to 410 million years ago. During the Silurian Period, the area that is now Cave Point was located near the earth's equator. Coral reefs thrived in what was then a tropical sea. Over the millions of years throughout the Silurian Period, the remains of the marine plants, animals and calcareous sands were deposited and accumulated. These materials and the conditions that existed, followed by millions of years of compaction and chemical alteration, resulted in the formation of dolomite. This is the type of bedrock exposed at Cave Point. Cave Point is located on approximately 19 acres of land at 5360 Schauer Road in the Town of Sevastopol.

Gorgeous - love the way you stopped the waves as they come crashing toward land.

AMAZING shot and even more amazing information, Steven. We had to check it out on google earth to 'see for ourselves'. *grin*
Thank you for sharing this wealth of information!

Amazing shot, can you imagine Wisconsin near the Equator?

Superb rugged beauty in those layers of ancient rock, and an image that has me wanting to be there. Thanks for the informative text, also.

Would love to be sitting on that plateau as the waves rush in, truly magnificent scene and the
perfect view of it you have !~

Wonderful spot and I am in awe of such natural wonderment! Beautiful capture!

spectacular coastline, gorgeous colour of the water ... and a "just-in-time" capture, with the bird gliding by ...

That is a beautiful rock formation... a nice spot on the upper part to sit and enjoy the day just listening to the water splashing on the rocks below. I enjoyed that informative read also, very nice!

Beautiful! Amazing how those trees grow out of the rock. Great information!

Nice seascape. I had to look twice at the bird at the waterline; my first thought was a ship or off-shore tower.

Fantastic !!! That sure is one beautiful place to be and that bird, oh it's lovely. I like the way the rock juts out into the ocean and the green of the tree framed so beautifully.

Marvelous seascape! The bird is at the right place in the composition. Have a nice day. Beautiful place!!

What a change from your most recent version. It all looks less welcoming for leisure too!