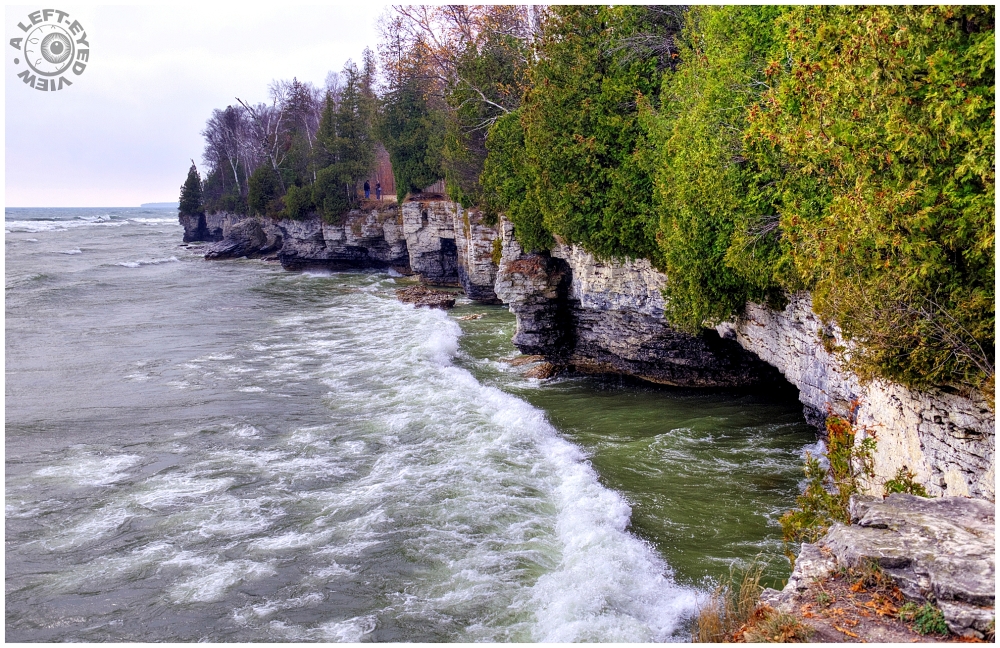 Posted by Steven (Chicagoland, United States) on 26 April 2013 in Landscape & Rural and Portfolio.

Here is a better "reveal" of the bedrock seen at Cave Point. There were moments where walking near the edge was a bit unsettling due to the erosion of the bedrock underneath by the rough waters.

The rocks exposed at Cave Point are from the Silurian Period, a geologic time period which lasted from approximately 435 million years to 410 million years ago. During the Silurian Period, the area that is now Cave Point was located near the earth's equator. Coral reefs thrived in what was then a tropical sea. Over the millions of years throughout the Silurian Period, the remains of the marine plants, animals and calcareous sands were deposited and accumulated. These materials and the conditions that existed, followed by millions of years of compaction and chemical alteration, resulted in the formation of dolomite. This is the type of bedrock exposed at Cave Point. Cave Point is located on approximately 19 acres of land at 5360 Schauer Road in the Town of Sevastopol.

Don't think I've ever seen vegetation that close to the sea.

Nice piece of coastal wildness, the intrigue in this picture is held by the couple in the clearing. My eyes keep going back to them.

I am familiar with dolomite, this is simply fascinating history, what a cave, your view is superb,
although probably perched most precariously !~

Gorgeous! I absolutely love the colors along with the details you've captured in the water and rock. Lovely shot, Steven!

An awesome chunk of shoreline, wonderfully shot. I love that break in the foliage to give us scale as we see the two people passing through.

That is a spectacular view Steven, I don't think I would venture to walk along the edge though... would probably lose my balance. It looks pretty safe where those people are standing. The movement of the water, the color.... you've really captured the beauty of Cave Point!

This is a stunning view! Looks rather more than I could handle for walking though.

Stunning shot of this wonderful coastline !!! The two persons make a great scale reference for these impressive cliffs ...

the slight diagonal takes me right through the image. well done

This is a wonderful image and reminds me so of Pictured Rocks National Lakeshore in the UP of Michigan.

Nice shot. I recognized the location before I read your caption - and I was there only once about 30 years ago. And then I had to check "Sevastopol" because I knew the place but didn't know the name.

Beautiful! In some places it looks like the rock could just give way and collapse. I love how the trees grow right to the edge and then there is the ocean. Absolutely beautiful. Really interesting information.

I find this so, so interesting thanks for the texts below ! It makes me wonder more about exploring underneath there in that little cave. As for the image it's definitely beautiful especially with greens and the two characters framed perfectly there. Fantastic !

That is absolutely magical.

This is an awesome landscape. Thanks for providing the info in your narrative. What state is this in?

That is a really rugged coastline. Not sure I'd want to walk there at all.

Do I see two persons?

Really cool caves being eroded there. I'll bet it was scary near the edge.

Excellent composition. This County is filled with very nice places to visit. Thanks for the explanation.