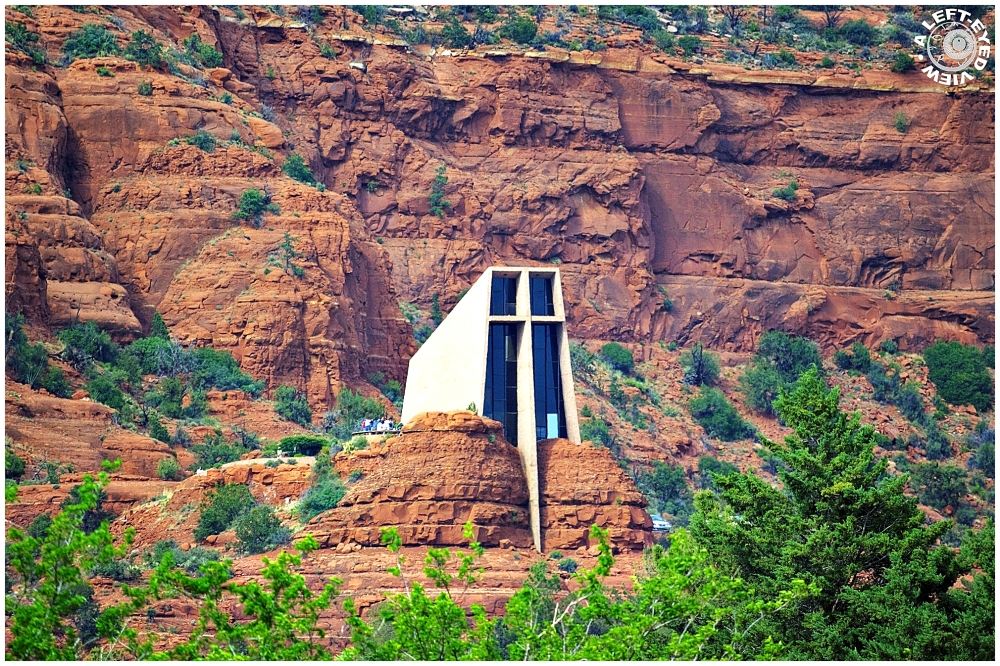 Chapel of the Holy Cross #3

Posted by Steven (Chicagoland, United States) on 14 June 2013 in Architecture and Portfolio.

The Chapel of the Holy Cross is a Roman Catholic chapel built into the mesas of Sedona, Arizona, which was inspired and commissioned by sculptor Marguerite Brunswig Staude. Richard Hein was chosen as project architect, and the design was executed by architect August K. Strotz, both from the firm of Anshen & Allen.

The chapel is built on Coconino National Forest land; the late Senator Barry Goldwater assisted Staude in obtaining a special-use permit. The construction supervisor was Fred Courkos, who built the chapel in 18 months at a cost of $300,000. The chapel was completed in 1956.

The American Institute of Architects gave the Chapel its Award of Honor in 1957. In the sculptor's words, “Though Catholic in faith, as a work of art the Chapel has a universal appeal. Its doors will ever be open to one and all, regardless of creed, that God may come to life in the souls of all men and be a living reality.” In 2007, Arizonans voted the Chapel to be one of the Seven Man-Made Wonders of Arizona.

This photo was captured on May 5, 2013, which was the day before the photo from yesterday was captured which explains why today's photo has some overcast rather than lots of sunshine.

Breathtaking view of this glorious architecture!

Interesting place looking at these last two shots, odd place to find such a modern church.

It really is a cool location - I can understand why it's such a big deal in Arizona. Lovely shot of it, Steven!

A wonderful image of the church ... people and the car add scale.

Oh, I like that view Steven, and it's really quite a large chapel. My favorite photo of the chapel so far, great color ... your processing is so natural. I like!

Now the size of the church is more conspicuous. Amazing work of architecture. It really contrasts with the reddish rock behind. Excellent presentation Steven.

Beautiful point of view - I love how the Cross is between the rocks.

Perhaps a better representation of the church, but the soaring sky of yesterday's shot was more inspirational.

The best one yet which I hate to say simply because they are all brilliant, I really
appreciate the fact that your photographs are not simply tourist ones, they all have
been meticulously planned and superbly executed 5***** !~

Gorgeous image! The architecture just fits in so well with the natural surroundings.

That shot shows how unnatural the building is. Gorgeous landscape but the architecture is one of those "what were they thinking?" moments.

standout out image of standout architecture...

It is gorgeous and brilliantly impressive!

Just amazing and the people really put it into perspective!

its realy nice
so great Steven

i really like your pictures, but i can't warm to this church at all ...