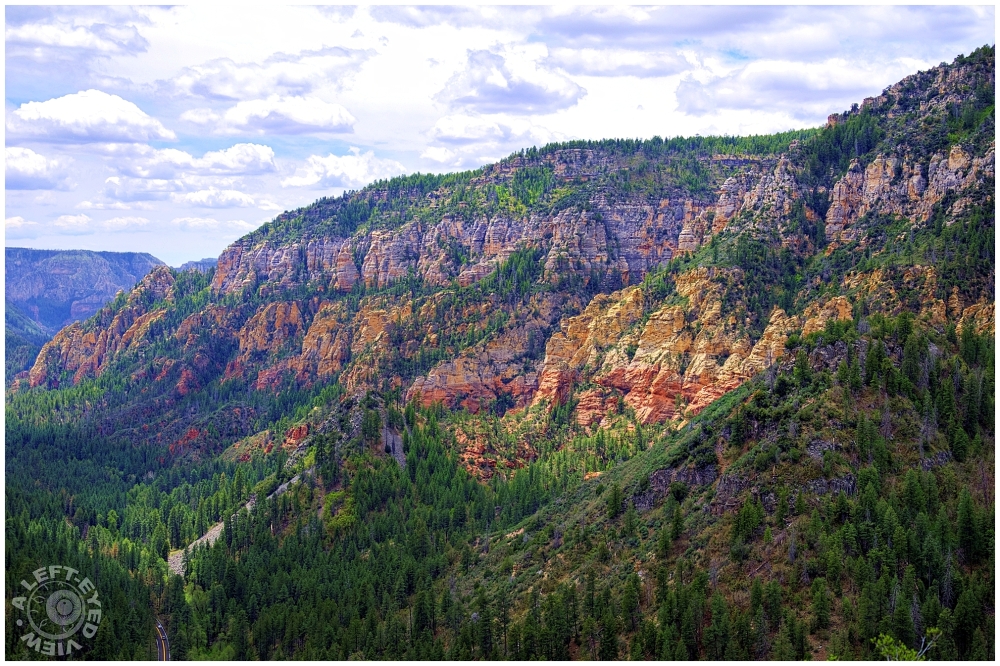 Posted by Steven (Chicagoland, United States) on 22 July 2013 in Landscape & Rural and Portfolio.

Oak Creek Canyon is a river gorge located along the Mogollon Rim in northern Arizona between the cities of Flagstaff and Sedona. The canyon is often described as a smaller cousin of the Grand Canyon because of its scenic beauty. State Route 89A enters the canyon on its north end via a series of hairpin turns before traversing the bottom of the canyon for about 13 miles until the highway enters the town of Sedona.

If you look near the bottom left corner of this photo, you can barely make out State Route 89A where we were before making the ascent all the way up. The average elevation of Oak Creek Canyon is approximately 7,200 feet (above sea level).

A view one could look at for hours and see the majesty of the world, a forest wanting to
grow so much they seem to find the mountains and the cliffs of very little hindrance, really
a refreshing view I love, 5*****'s !~

A very beautiful landscape in superb light. Have a nice day.

Pity about those clouds not playing ball with you, the rest is just gorgeous with piles and masses of detail.

I just love the color and texture of the rock combined with those wonderful trees. The tiny glimpse of the road really shows the epic scale of the landscape.

I remember our drive up through that canyon ... and then looking back as you did here. Thank you for refreshing my memory with your gorgeous shot!

I remember also our trip to these lands. Thanks.

It seems a painture!! :-) Great shot with awesome, gorgeous colors.

so nice landscape
so great colors

Stunning landscape ... the colors and the textures are spectacular !!!

Absolutely beautiful! This is one of my favorites of this series Steven! The color is just outstanding. It looks like a painting!

Wow, that road way down there is so small Steven... that really puts it all into perspective! Fabulous colors. you've captured such a view in this photo. Awesome!!

amazing mosaic of colours and textures! love the clarity that you achieve in your photos!

That so very like areas around here. Very nice shot.

A beautiful view. Did your wife buy any jewelry? Mine has done so. ;-)

Memories... by Judy aka L@dybug