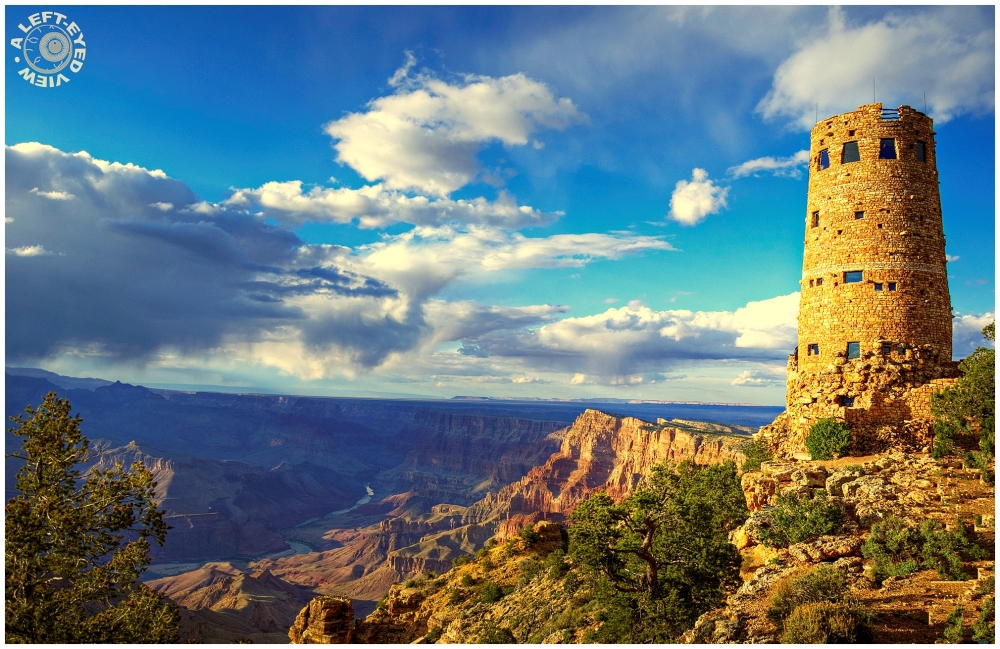 Posted by Steven (Chicagoland, United States) on 29 July 2013 in Landscape & Rural and Portfolio.

The Indian Watchtower sits out on a promontory overlooking the South Rim of the Grand Canyon. From a distance, the building's silhouette looks like the Anasazi watchtower it was meant to mimic. As Virginia L. Grattan wrote in Mary Colter Builder Upon the Red Earth, "The Indian watchtower at Desert View was not a copy, but what Colter called a 're-creation' of an Indian watchtower." Standing at 70 feet, with a 30-foot base, the tower is unique in having a concrete foundation and steel framework well-hidden in the stones of the tower. The ground level of the tower is a large, round observation room with a spectacular view of the Grand Canyon. Upstairs, the Hopi Room presents paintings by Hopi artist Fred Kabotie, who took the room's theme from the Hopi Snake Dance. An outdoor observation deck is directly above the observation room.

It looks pretty authentic to me - super scene

A beautiful and unique tower. Best view of the Canyon from there!

It looks far older than a 1932 construction, must be a great place to sit and take in the scene in relative comfort. Love your warm tones for this stone Steve.

Fabulous colors and light, Steven - I just love that Grand Canyon landscape beyond.

Great place for studio/loft. Diner parties on the roof, you wouldn't have to worry about disturbing the neighbors.
Beautiful framing and exposure.

Wow this is breathtaking! I would love to go there. Very beautiful shot.

WOW! This is a spectacular image!

Magnificent, the viewer is drawn into the photo at lightning speed, spectacular 5*****'s !~

Gorgeous frame. The light is just beautiful and what a view! It looks like a postcard!

picture postcard perfect, and taken with the best light conditions !!!

Great composition with beautiful perspective! What an impressive landscape!! Spectacular.

Fascinating shot and write-up. It had never occurred to me that Native Indians built anything with stone/bricks

wonderful composition and light! the bricks used for the tower were smartly chosen - it appears almost as one with the landscape because of its colour tones! well captured!

Wonderful light on the tower and excellent sky.

That is just brilliant Steven! I love the intensity of those gorgeous colors and the scene is amazing.

A gorgeous image captured so well.

Memories... by Judy aka L@dybug