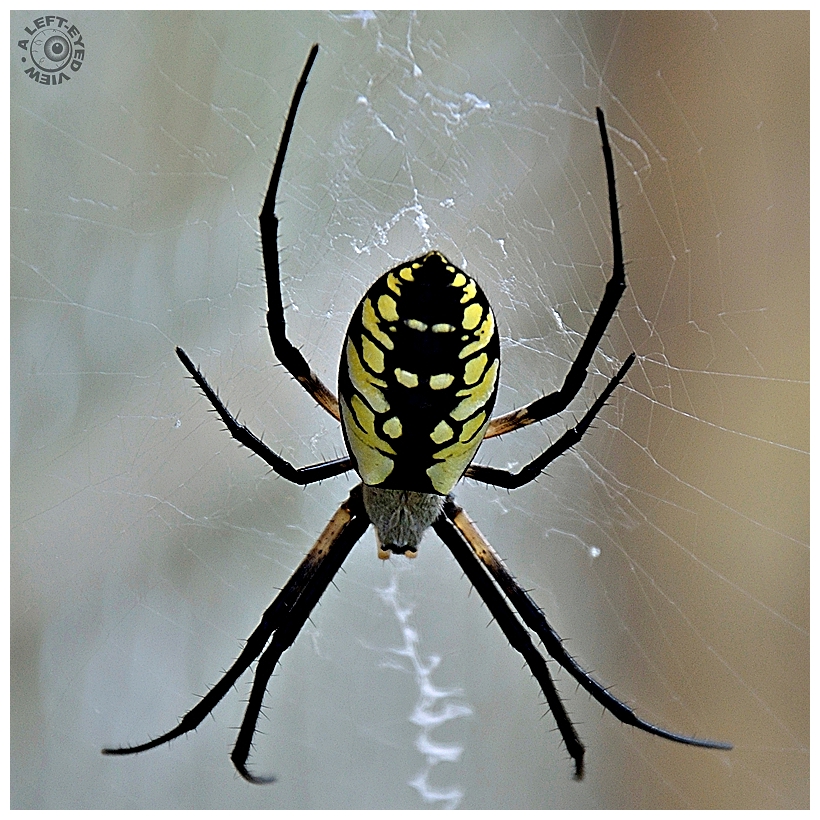 Posted by Steven (Chicagoland, United States) on 5 September 2013 in Animal & Insect and Portfolio.

The spider species Argiope aurantia is commonly known as the yellow garden orb weaver, black and yellow garden spider, writing spider, or corn spider. It is common to the contiguous United States, Hawaii, southern Canada, Mexico, and Central America. They have distinctive yellow and black markings on their abdomens and a mostly white cephalothorax. The etymology of its name means "gilded silver-face". Like other members of Argiope they are considered harmless to humans.

The web of the yellow garden spider is distinctive: a circular shape up to 2 feet in diameter, with a dense zigzag of silk (seen toward the bottom center), known as a stabilimentum, in the center. The purpose of the stabilimentum is disputed. It is possible that it acts as camouflage for the spider lurking in the web's center, but it may also attract insect prey, or even warn birds of the presence of the otherwise difficult-to-see web. Only those spiders that are active during the day construct stabilimenta in their webs.

Wonderful macro shot of this fellow.
I saw one of these in '09; see it here.

A beautiful shot of this lady with the alien riding on her back. Growing up in the Mid-West, I remember seeing lots of these.

A really beautiful spider ... Excellent macro !!! The design on her back and the colors are wonderful ...

That is one large spider! But is has beautiful markings. Fabulous capture.

A splendid macro with an excellent level of detail. Even the hairs in the legs are clearly visible.

Fantastic close up! The details are just wonderful! This time of year these spiders come out and work on their webs all night. It is just fascinating to see them work.

Excellent shot and I can see the net too.

I wouldn't want to be anywhere near that! But the color and image are great!

Fine arachnid portrait. Excellent sharpness with only a bit of softness at the end of the front legs.

superb macro of a wonderful and very handsome "helper" in the garden !

Very cool! I have one of these spiders in my garden now.