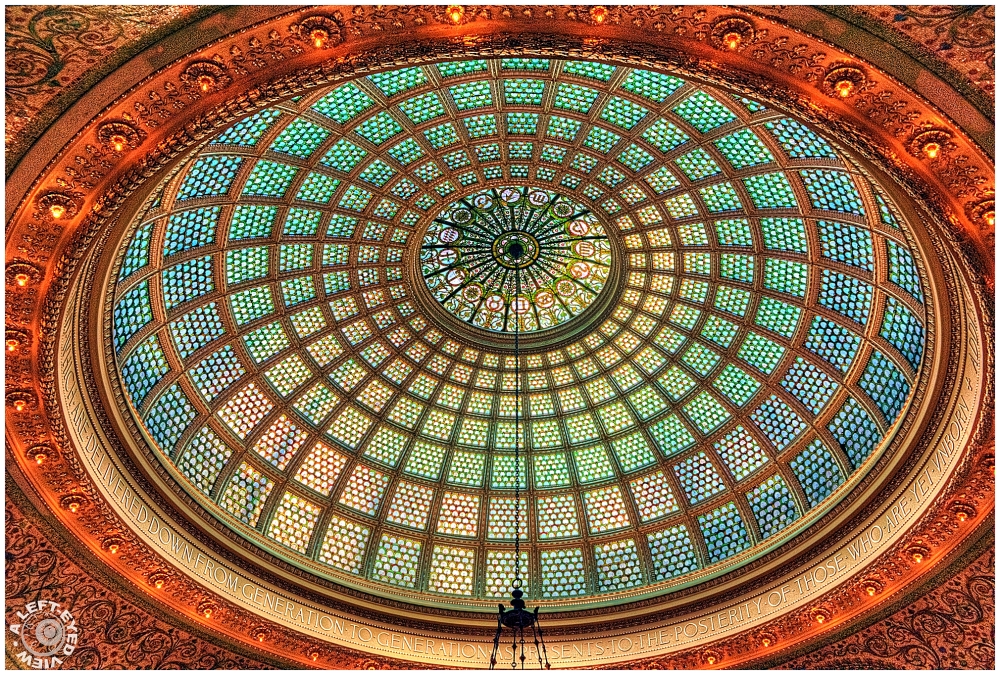 Posted by Steven (Chicagoland, United States) on 10 September 2013 in Art & Design and Portfolio.

Another edition of "What's old is new again." (Tag: woina) This photo was posted back in 2009. But this was during a time when my HDR processing was a little (OK, a lot) over the top. I wanted to reprocess this image in a more "conservative" way. :-)

Approximately 38 feet in diameter, the Tiffany dome inside the Chicago Cultural Center spans more than 1,000 square feet. It contains approximately 30,000 pieces of glass in 243 sections within an ornate cast iron frame. The body of the dome has a “fish scale” pattern. The center, called the oculus, shows the signs of the zodiac. The interior stained glass dome originally was protected by an exterior translucent glass dome, which allowed much-needed natural light into what was then the Chicago library’s general delivery room.

During this project, the concrete and copper exterior dome that had been added during the 1930s was removed, once again allowing natural light to shine through the glass. This was added, I was told, to protect the dome from enemy attack as the country entered World War I. Now, natural light pours into the room, changing the subtle colors of the restored glass minute-by-minute, while all of the room’s decorative elements glow and harmonize. In addition to cleaning and repairing the art glass, the ornate cast iron framework of the dome was given a new application of its original finish. Delicate rosette lighting around the cornice of the dome also was refurbished.

It was also amazing by how much the colors would change in the Tiffany dome as the earth continued to orbit the ever-setting sun. After touring the entire building, I am still amazed at the construction of the building, the marble decor and the mosaic friezes, all at a minimal cost of $2,000,000.00.

Along the bottom of the dome’s entire perimeter is a phrase by Joseph Addison (1672-1719) written in Roman lettering: “Books are the legacies that a great genius leaves to mankind which are delivered down from generation to generation as presents to the posterity of those who are yet unborn.” Remember that the building’s original function was a library when it was first built, not as a cultural center.

This HDR processing is an odd thing yeah? We both probably travelled the same road, out at the start the wild super saturated colours and excessive glows were all new territory and HAD to be explored. Now of course we all get a little more self critical and the learning curve has taught us how to control the process in such a way that we can actually achieve what we want, rather than accepting the the psychedelic creations that the software threw at us in the past.
Yes, this surely is a GOOD HDR, one that you can be really satisfied with.

Splendid.
Have a beautiful day.

Superb . Great colors too . This is a beautiful way .

Yes, curious to look back at how we 'saw' things . . and these domes are a tough assignment in any mode.

Your processing drew every bit of available light out of your image w/o the often/usual distortions. This is really beautiful, Steven.

WOW! This is spectacular!

This is just magnificent! I love the color! Gorgeous image!

A wonderful piece of art! A really stunning shot here.

Stunning image of this magnificent dome ... the colors and details are spectacular !!! Excellent treatment and very interesting information ...

This is so gorgeous, and a bit of an optical illusion. I can see it as curving in or curving out.

@B. Thomas: It's ironic that you would say that. I felt the same way about the Tiffany dome's chandelier and how it seemed to stand out, posted here. :-)

Excellent - It's wonderful ! A superb capture !!!

HDR is best when kept very subtle. This is lovely.

I remember this dome. It's gorgeous! Superb processing.

Amazing artwork! It is so luminous, the colors are lovely. You have made a good choice to reprocess these images. Really nice work!

this cupola glows thanks to your new touch !!!