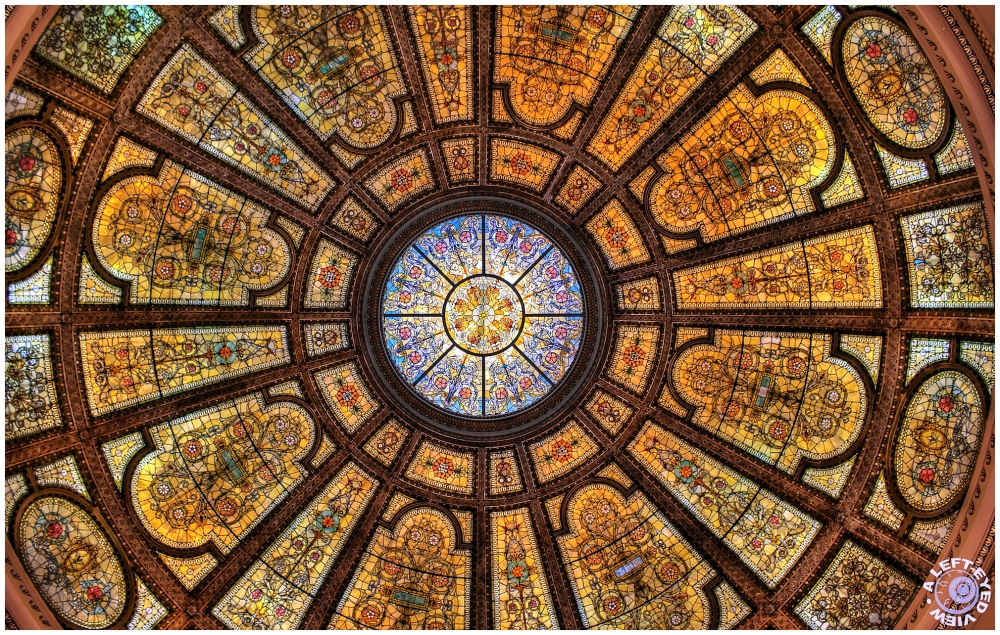 Posted by Steven (Chicagoland, United States) on 11 September 2013 in Art & Design and Portfolio.

Another edition of "What's old is new again." (Tag: woina) This photo was posted back in 2009. But this was during a time when my HDR processing was a little (OK, a lot) over the top. I wanted to reprocess this image in a more "conservative" way, which actually brings out better detail.

The Chicago Cultural Center, originally the main branch of the Chicago Public Library (1893), which was built on land donated by the Grand Army of the Republic, maintains a memorial hall to the Grand Army inside the building.
The Grand Army of the Republic was a fraternal organization composed of veterans of the Union Army who had served in the American Civil War. The GAR was among the first organized interest groups in American politics. It was succeeded by the Sons of Union Veterans of the Civil War (SUVCW).
The rotunda just outside the memorial hall features 30-foot walls of Knoxville pink marble, mosaic floor, and a fine, colorful stained-glass dome in an intricate Renaissance floral pattern by the firm of Healy and Millet.

Yes, so much cleaner, brighter, and easier to find the detail.

Yup, we have progress for sure !!

"When we know better, we do better!"
Only wish the quote my own. ;D

The geometry and symmetries seem to concentrate the wonderful colors in the center as a terrific finale. Superb image.

This is beautiful too Steven..I see what you mean about transitions of skill over time...but you always were and still are the man when it comes to fine, tasteful HDR work...I have ALWAYS loved your work!!

Absolutely beautiful. What a stunning thing to look at!!

Absolutely beautiful! This is so majestic!

Again, much better than the old HDR.

Agree, this is much more skilfully processed than the 2009 version

This magnificent dome almost reads as a map, so much detail and beauty it must have had
many awards when first built . Your processing has improved beyond words for this photo !~

i fully agree with phil above! this "new" process you're employing works miracles on already very good images !